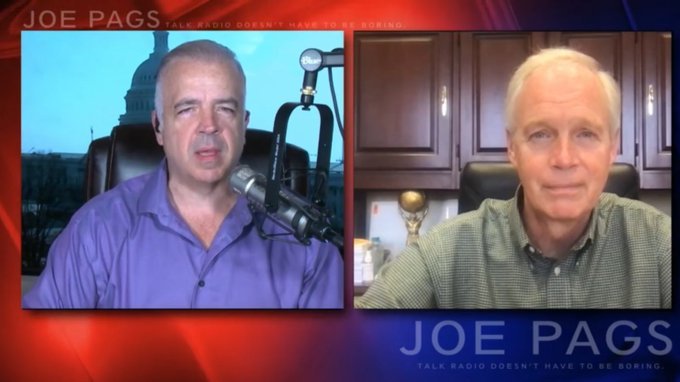 Sen. Ron Johnson (R-WI) is under assault by Democrats and the media for remarks he made Thursday saying he would have been concerned on January 6 if the tens of thousands of protesters marching on the Capitol had been comprised of Black Live Matter and Antifa activists rather than Trump supporters.

Johnson made the remarks in a radio interview with syndicated talk show host Joe Pags Pagliarulo that have been taken out of context and lied about by Democrat activists and reporters. Before Johnson made the comments he is under attack for, he noted he had repeatedly condemned the Capitol rioters. He and Pags also spoke about the Black Lives Matter-Antifa riots of 2020 that caused a reported $2 billion dollars in damages and killed 26 people. That led to Johnson contrasting his opinion on the potential for violence by the protesters.

Ron Johnson: “I’m also criticized because I made the comment that on January 6 I never felt threatened. Because I didn’t and mainly because even though those thousands of people that were marching to the Capitol were trying to pressure people like me to vote the way they wanted me to vote, I knew those were people that love this country, that truly respect law enforcement, would never do anything to break the law, and so I wasn’t concerned. Now, had the tables been turned–Joe, this could get me in trouble–had the tables been turned and President Trump won the election and those were tens of thousands of Black Lives Matter and Antifa protesters, I might have been a little concerned…Well, let’s face it, people didn’t board up their storefronts in metropolitan areas in case Joe Biden won.”

Listen to the entire interview:

It is worth noting that up until the January 6 Capitol riot Trump rallies and marches had been peaceful while Antifa and Black Lives Matter had held hundreds of violent protests in 2020 in cities across America with hundreds of stores looted and burned in arson fires. The Antifa-BLM riots continue to this day in cities like Portland and Seattle while the January 6 riot has not been repeated.

The Milwaukee Journal Sentinel headlined their report by excluding Johnson’s mention of Antifa to make him come off as racist, holding off until the third paragraph to report his mention of Antifa but then following with an embedded tweet by the Democrat group American Bridge falsely accusing Johnson of racism: