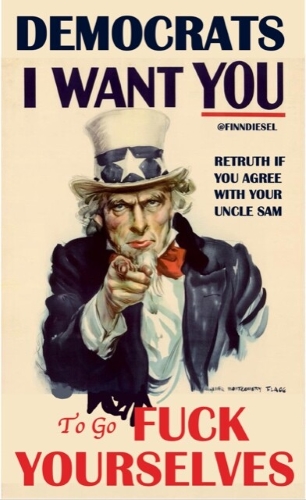 The Bureau of Labor and Statistics released the September Consumer Price Index (CPI) today [DATA HERE].  The financial and business media call the continued rise of consumer inflation “unexpected,” however, the results are not a surprise to those who are not pretending. 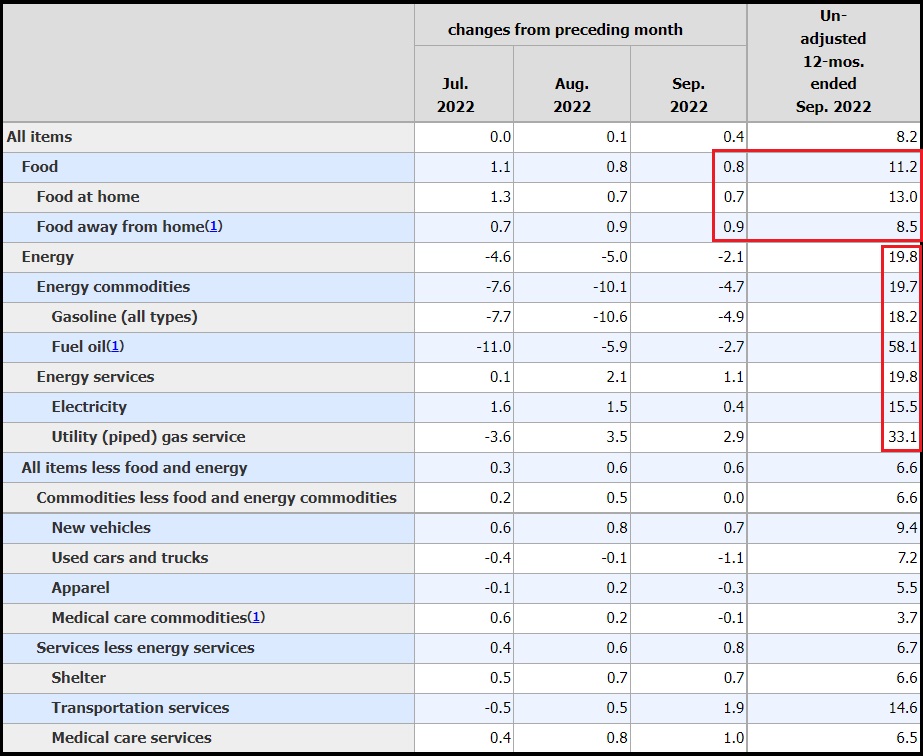 This CNBC headline highlights the economic pretense still entrenched: “Inflation increased 0.4% in September, more than expected despite rate hikes.”  Those who are not pretending fully understand the economic dynamic, but you will not find reality expressed by the mainstream media.

FED rate hikes can only impact the demand side of the inflation issue. U.S (and global) inflation is NOT the result of excess demand. It has not been driven by demand for over a year.  The root cause of inflation is on the supply side. That root is grounded in the energy policy making everything entering the marketplace more expensive.

The historic rise in energy prices; the result of Joe Biden’s specific energy policy to limit oil, gas and coal as energy resources; are what have driven inflation throughout the economy.  The monetary policy (Fed policy) continues to pretend this dynamic does not exist.  The FED is trying to support the political policy, but the bloom is off the ruse.

Overall inflation increased 0.4% in September, leading to a result of 8.2% year over year.  Food and energy prices continue driving inflation, additionally core inflation (everything except food and energy) continues to be driven by the originating issue of extreme energy costs.

Everything costs more because energy costs more.  That is the reality of this inflation issue. 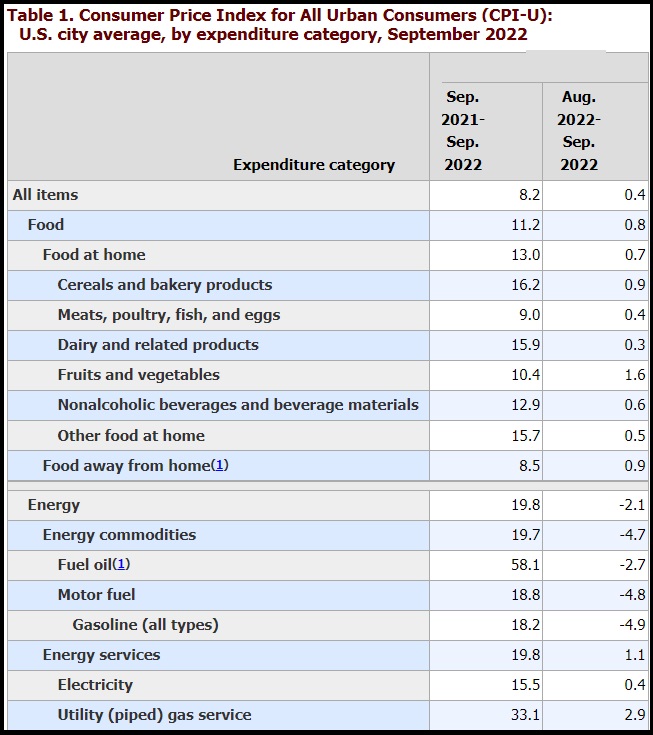 (CNBC) […] “The Federal Reserve has made it very clear they’re committed to price stability, they’re committed to reducing the inflationary pressures,” said Michelle Meyer, chief U.S. economist at the Mastercard Economics Institute. “The more inflation comes in above expectations, the more they’re going to have to prove that commitment, which means higher interest rates and cooling in the underlying economy.”

Another large jump in food prices boosted the headline number. The food index rose 0.8% for the month, the same as August, and was up 11.2% from a year ago.

That increase helped offset a 2.1% decline in energy prices that included a 4.9% drop in gasoline. Energy prices have moved higher in October, with the price of regular gasoline at the pump nearly 20 cents higher than a month ago, according to AAA.

Closely watched shelter costs, which make up about one-third of CPI, rose 0.7% and are up 6.6% from a year ago. Transportation services also showed a big bump, increasing 1.9% on the month and 14.6% on an annual basis. Medical care services costs rose 1% in September.

The rising costs meant more bad news for workers, whose average hourly earnings declined 0.1% for the month on an inflation-adjusted basis and are off 3% from a year ago, according to a separate BLS release.  Inflation is rising despite aggressive Federal Reserve efforts to get price increases under control. (more)

I feel like we are living in a parallel universe, where this grand game of pretense continues.

Every financial pundit knows the root cause of inflation is Joe Biden’s energy policy, yet they maintain the lies in order to protect the regime.

Raising interest rates in a supply side inflation economy only does one thing, it makes the economy contract faster.  The only reason to intentionally shrink the economy is to try and reduce the demand for energy resources as part of the “transition to a green economy.”  Together, the Biden administration and Federal Reserve are trying to lower economic output to meet a lowered amount of energy being produced.  That is the reality of our situation.

They are destroying the working and middle class in order to chase their climate change agenda.  These people must be removed from power. 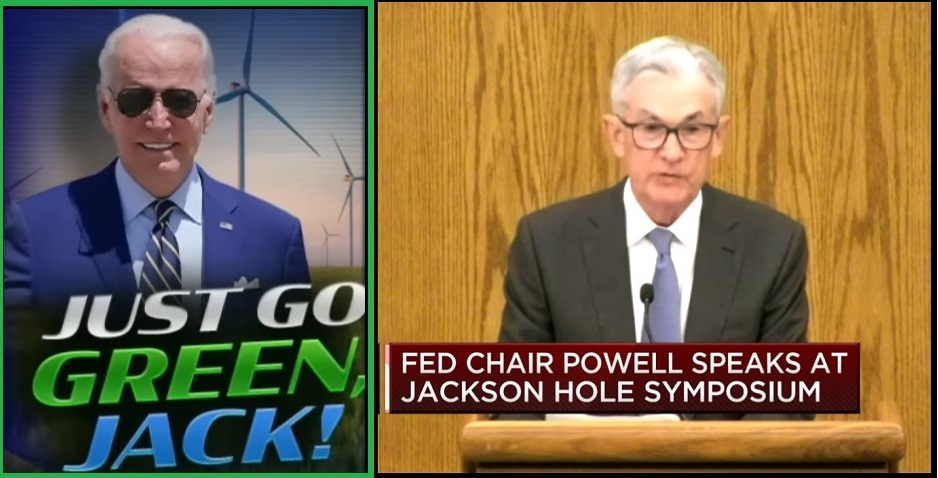 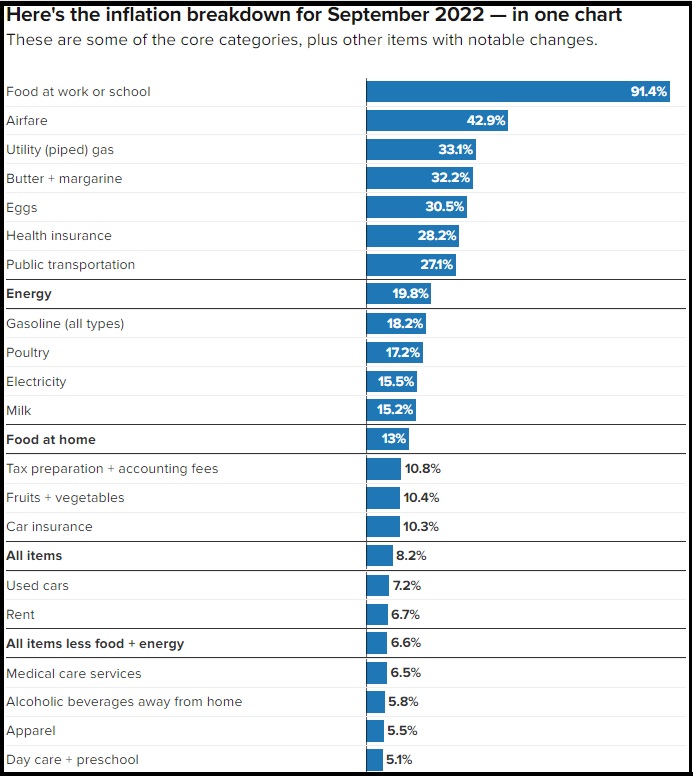