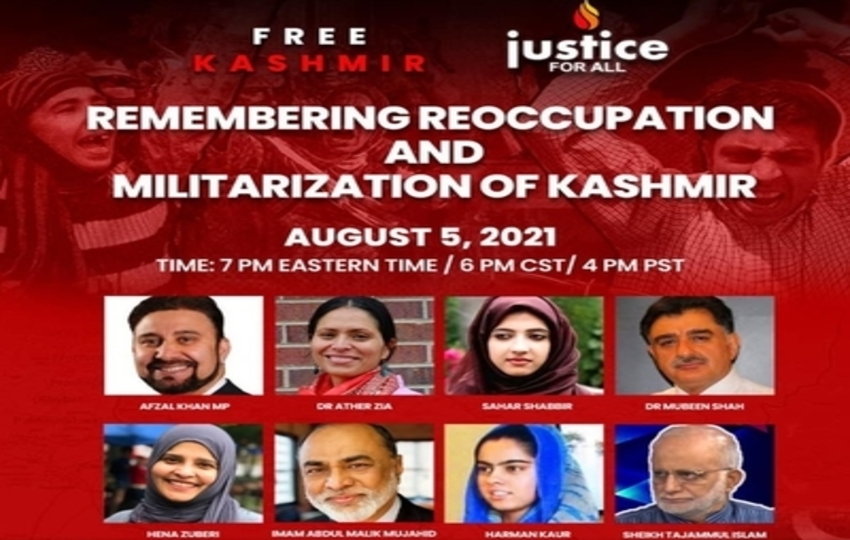 “India is no longer [far] from becoming what the Nazi regime was under Hitler,” a speaker ominously declared at an Aug. 5 webinar commemorating the Indian “reoccupation and militarization of Kashmir.”

Student activist Harman Kaur made this outlandish claim during an online event to mark the two-year anniversary of India’s voiding of a law that had divided the disputed Kashmir region into two federally-administered territories. Now it is governed directly by New Delhi.

The online event was sponsored by Justice for All, which, along with its parent company Sound Vision, has pushed an alarmist rhetoric alleging an “imminent genocide” of Kashmiris and Muslims in the wake of India’s 2019 action.

Sound Vision is an offshoot of the Islamic Circle of North America (ICNA), a South Asian Islamist group that has a long history of advocating for Kashmiri self-determination. ICNA, whose founding leaders support the ideology of the Sunni revivalist movement Jamaat-e-Islami (JI), seeks to establish “Iqamat Deen” or the Islamic system of life, in North America with the ultimate goal of founding a global Islamic state or Caliphate.

India banned JI’s chapter in Jammu & Kashmir (JI J&K) in March 2019 due to its close ties to militant groups and its efforts to “escalate a secessionist movement” in the region. The chapter also allegedly provided “ideological” and “logistical support” to separatists and terrorists.

Kaur, a political science major at the University of Central Oklahoma, is general secretary of the World Sikh Parliament’s Civil and Human Rights Council.

The anti-India Sikh organization claims to “represent the interests of the Sikh nation and community at a national and international level” and advocates for a separate Sikh homeland carved out of India’s Punjab region called Khalistan (“Land of the Pure”). The Khalistan movement is reportedly backed by Pakistan, and while the movement has died down in India, it continues to garner support among Sikh diaspora communities in the West.

Kaur’s presence at the webinar is another instance of Khalistan and Kashmir separatist movement advocates joining hands in “global solidarity” to attack the common enemy – India.

India’s ruling Bhartiya Janata Party (BJP) government has “put the veil of being a secular state in front of the world and commit heinous crimes behind it,” Kaur alleged. She cited 2002 riots in Gujarat that killed more than 1,000 people, mostly Muslims, calling it a “genocide.”

But Kaur glossed over the fact that the riots were triggered by a violent Muslim mob‘s burning a train carrying around 1,700 karsevaks (Hindu pilgrims). Nearly 60 karsevaks, including women and children, perished in the attack. Nor did she mention the 1990 brutal massacre of karsevaks that went largely unreported, or the mass exodus of hundreds of thousands of Kashmiri Hindus from the Kashmir valley around the same time.

The status change of Jammu and Kashmir (J&K) came when India nullified Article 370, which had given “special status” to J&K under “Temporary, Transitional and Special Provisions” in the Indian constitution. It was “never meant to be permanent,” writes American Enterprise Institute (AEI) scholar Michael Rubin. It was a “legal” move that “brought progressive change” especially for women, children and underprivileged classes.

Kashmir has been a source of tension between India and Pakistan since the two countries gained independence from British rule in 1947. Both India and Pakistan claim the state in its entirety and have fought multiple wars over it.

Describing the Indian government action as “both wise and prescient,” Rubin praised the successful conduct of block development council elections in December and the earmarking of billions of dollars for infrastructure and development projects in the region. He also noted the marked decline in terror incidents and terrorist recruitment.

But speakers at the Justice for All webinar only propagated the myth of Indian “imperial, neo-colonial intentions” in J&K and praised the “peaceful, just resistance” in the region.

“This … has always been a peaceful, just resistance except when Kashmiris were pushed to the corner and right now they’re in the corner,” claimed University of Northern Colorado anthropology professor Ather Zia. She also called for “rescuing Kashmiri resistance from the slurs of terrorism.”

“That’s what India calls it and that’s how India kills Kashmiris which are war crimes so to speak,” she said.

But the “peaceful, just resistance” that Zia applauds has led to the killing of nearly 48,000 people since the start of the insurgency in 1988.

Zia has also tweeted her support for the “resistance.” In May 2020, she mourned the death of Hizbul Mujahideen commander Riyaz Naikoo, who was killed by Indian security forces. The U.S.-designated Hizbul Mujahideen (HM) emerged in 1989 as JI’s militant wing and has been responsible for several terrorist attacks in J&K.

“[R]est in power Shaheed Riyaz Naikoo,” she wrote adding a quote by former South African President Nelson Mandela: “the oppressed is often left no recourse but to use methods that mirror those of the oppressor. At a point, one can only fight fire with fire.’ #KashmirResists #standwithkashmir”

Another speaker, Sehar Shah, introduced herself as the “daughter of the prisoner of conscience Shabir Shah, the person who started the freedom movement long back.” She added that since the age of 14, her father had “dedicated his life to the Kashmir struggle” and was currently imprisoned in India’s Tihar jail “scripting the new history of resistance.”

Shabir has been accused by India’s top financial investigative agency of involvement in funneling “huge proceeds of crime from various countries including Pakistan to create unrest in Kashmir.” The alleged money laundering was committed by Shah in 2005.

Shabir received money to create “unrest” in J&K through Jaish-e-Mohamed (JeM) operative Mohammed Aslam Wani, who ran a “hawala” service that supplied Shabir with approximately $302,862. The information was disclosed to authorities by Wani who is now free on bail. Shabir’s bail application was denied by a Delhi court last month, but the judge reportedly “directed the Enforcement Directorate to expedite the trial.”

Justice for All has launched a “Prisoner of Haqq (Right)” petition campaign to call for Shabir Shah’s release, calling him the “Nelson Mandela of Kashmir.”

Saeed is the “founding member of Jamaat-ud-Dawa, a radical Ahl-e-Hadith Islamist organization dedicated to installing Islamist rule over parts of India and Pakistan, and its military branch Lashkar-e-Tayyiba.” Pakistani courts have collectively sentenced Saeed to 36 years in prison in several terrorism financing cases.

“India is getting worst possible coverage of its life in the west. There is hope.”

Last week’s program is a continuation of the propaganda campaign mounted by Justice for All and Sound Vision. In February, Justice for All hosted Ahmed bin Qasim, the son of Aasiya Andrabi, a hardcore pro-Pakistan separatist leader. Andrabi was arrested in April 2018 for running the terrorist organization Dukhtaran-e-Milat (Daughters of the Nation). Last November, a Pakistan-backed Kashmir leader was a featured guest on Sound Vision’s Muslim Network TV. The hour-long talk show painted Kashmiris as unfortunate victims of brutal Indian aggression, and perpetuated the myth of a “systematic genocide” of Kashmiris by India’s “one million [person] army.”

While no democracy is perfect and every democracy has its challenges, the recent webinar is yet another attempt by American Islamists to attack Indian democracy and its legally-elected government by distorting facts and propagating myths.