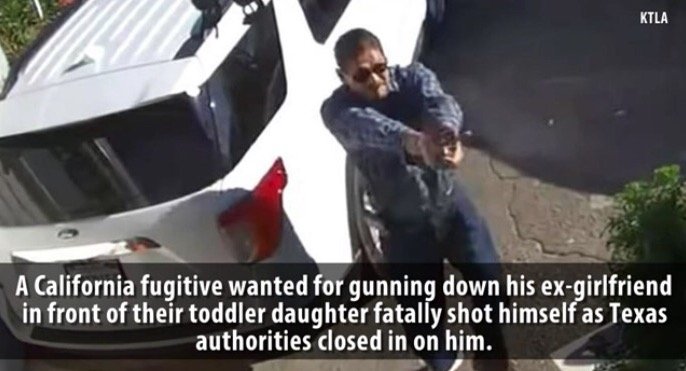 Mara Salvatrucha, commonly referred to as MS-13 is a notoriously violent gang formed in Los Angeles by (mostly illegal) immigrants from El Salvador.

Last week Flores was released in Los Angeles by LAPD after they ignored a detainer for Flores to be handed over to ICE and he went on to murder his ex-girlfriend in Pacoima, in Los Angeles County.

The footage, released by the Los Angeles Police Department, shows Ruiz get out of her SUV and reach into the back seat. Her 3-year-old daughter can be seen moving around in what appears to be a child safety seat.

Suddenly, a car pulls rapidly behind the SUV.

Ruiz apparently spots her ex-boyfriend’s car and, screaming in obvious terror, runs toward the front door of the home. Los Angeles Detective Sharon Kim told NBC Los Angeles that Ruiz, who had recently ended the relationship, had an active restraining order against Flores.

Flores runs after her, a pistol in hand. As Ruiz, who is out of camera range at the front door, screams for help, he grips the gun in both hands and fires.

Flores fires six bullets at Ruiz, appearing to follow her body with the gun barrel as she falls to the ground.

A nationwide manhunt was launched over the weekend after Flores fled from California to Dallas, Texas where the FBI’s Fugitive Task Force began tracking him.

As soon as Flores realized he was being followed by law enforcement, he exited his vehicle and fatally shot himself.

Several media outlets reporting on this story glossed over the fact that Flores was an illegal alien and MS-13 gang member and referred to him simply as a “fugitive” who committed suicide after killing his girlfriend.

Thanks to the Center For Immigration Studies, we know that Flores was a dangerous MS-13 gang member who illegally entered the United States and was released due to deadly sanctuary city policies passed by Democrat politicians.

Herbert Nixon Flores was an illegal criminal alien and a member of the notoriously violent MS-13 gang. He has an extensive 30-year criminal record – burglary, illegal entry, concealed weapon, domestic violence, vandalism, transportation of a controlled substance, driving under the influence, resisting arrest, etc. He has been ordered removed and physically deported 10 times.