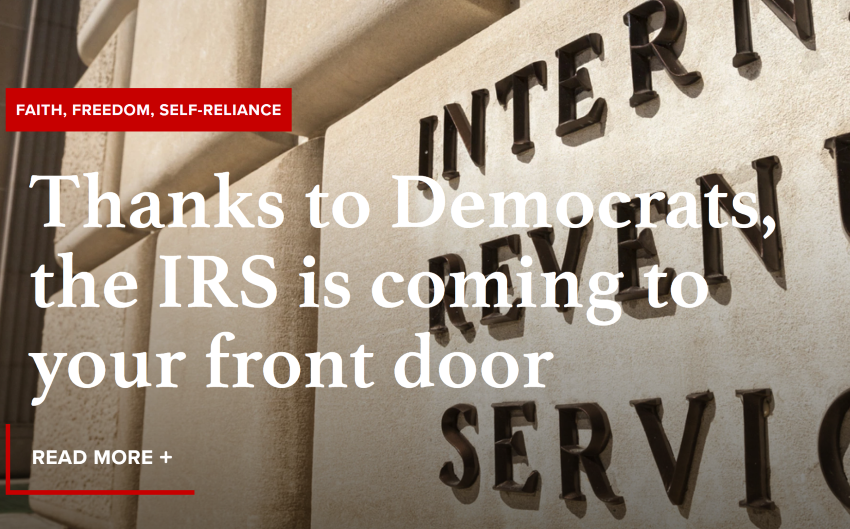 Democrats in Washington just added $80 billion to the Internal Revenue Service ’s budget, supercharging and rewarding an agency that has a notorious track record of abusing its power for political purposes.

Nine years ago, the Obama-Biden IRS was caught targeting conservative organizations leading up to the 2012 presidential election. People were assured the scandal would be thoroughly investigated, but the IRS was already busy destroying evidence behind closed doors. In total, 422 backup tapes holding 24,000 emails from Lois Lerner, the IRS official in charge of the targeting scheme, were erased.

In June 2013, two months after the scandal broke, the IRS paid out $70 million in bonuses to staff. Lerner received $42,000 and retired three months later with a full taxpayer-funded pension without ever being held responsible for the role she played. Indeed, not a single IRS employee ever faced charges, even after the case was referred to Obama’s Justice Department .

In short, the federal government targeted people with dissenting political beliefs, violated their constitutional rights, and was never held responsible for it.

In the years since then, the IRS has done little to regain the trust of the public. In fact, the agency’s recent actions have only deepened the public’s mistrust of the agency. In August 2021, for example, the private tax information of more than 1,000 wealthy people was leaked coincidentally at the same time the White House was seeking public support for raising taxes on the very same people to finance its spending plans. Last month, the tax documents for Ambassador Nikki Haley ’s nonprofit group were leaked, exposing the private donor information of one of President Joe Biden’s potential 2024 opponents.

And just weeks ago, the agency again leaked the confidential information of 120,000 taxpayers with individual retirement accounts. These are the same type of accounts that millions count on for retirement and on which Democrats want to impose additional contribution limits. They even included such a proposal in their original $5 trillion Build Back Better legislation that passed the House of Representatives last year.

This brings us to the so-called Inflation Reduction Act , which includes $80 billion in new funding for the IRS to hire 87,000 new agents. The legislation was passed by Democrats in Congress and signed into law by Biden this summer.

The act essentially empowers the IRS to search under the couch cushions of every living room in America. More than half of the $80 billion allocated to the agency is earmarked for enforcement, like conducting audits, while only 4% goes to fixing the agency’s atrocious customer service. Even Obama’s IRS Commissioner John Koskinen has admitted the agency cannot “efficiently use that much money.”

Democrats have repeatedly dismissed Republicans’ concerns about a tyrannical IRS with little to no regard for how the agency’s frequent abuses affect people’s everyday lives. Just last year, House Democrats proposed giving the IRS the power to snoop in every single bank account that had inflows or outflows of at least $10,000 each year. Biden even included this proposal in his budget submission. If this policy had passed, up to 134 million taxpayers would have been targeted by such an invasion of privacy, according to the Joint Committee on Taxation.

The vast majority of people make good-faith efforts to pay the taxes they owe. The truth is that Washington has a spending problem, not a revenue problem. So far this year, overall revenues are up 23% and on pace to be more than 20% of GDP, the highest in 78 years, thanks to the Republican-passed Tax Cuts and Jobs Act. People are paying their fair share — Washington just wants a bigger cut.

There’s a saying that if all you have is a hammer, everything looks like a nail. Washington Democrats just handed the IRS a giant $80 billion hammer along with a mandate to start swinging.

Jason Smith is a U.S. representative for Missouri and serves as the Republican leader of the House Budget Committee and the Ways and Means Committee.

Sign up now to get the Washington Examiner’s breaking news and timely commentary delivered right to your inbox.
OPINIONBELTWAY CONFIDENTIALBELTWAY OP-EDSIRSDEMOCRATIC PARTYTAX
Share on: