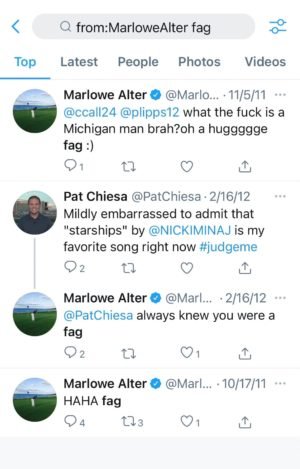 Coach Campbell was forced to apologize to the cancel culture mob for the 20-year-old remarks.

That’s when author and activist Mike Cernovich pointed out that Free Press reporter Marlowe Alter posted his own antigay slurs — but his comments were less than 10 years ago.

Who will cancel the cancellers? https://t.co/OGUF3RvFeapic.twitter.com/KSzMU7NsYR

A Detroit Free Press reporter has been subjected to intense backlash on social media after criticizing new Detroit Lions head coach Dan Campbell for an anti-gay remark he made more than 20 years ago.

On January 15, Marlowe Alter published an article highlighting anti-gay comments Campbell made at a pep rally for Texas A&M in 1998.

Campbell told an audience of 40,000 people that he was proud to attend a university where “men like women and women like men.”

It provoked outcry at the time, with Eric W. Trekell — then-spokesman for LGBTQ organization Texas A&M Allies — writing to the school’s president, “I suffered the pain of listening to a football player tell me that A&M is NOT my university.”

Campbell published an apology the following week, writing, “I offended some people, and I’m sorry for that. It was heat of the moment. It’s not necessarily that I directed it at anyone.”

However, Campbell’s past comments were quickly sidelined after tweets by Alter containing racist and homophobic language were unearthed.

“@freepsports does a smear job piece to try getting someone cancelled,” conservative author Mike Cernovich tweeted on Jan. 16. “The ‘reporter’ who wrote the piece has years of racist and homophobic tweets.”

Marlowe Alter has a string of anti-gay tweets from 8 years ago.

The twisted reporter was forced to apologize.