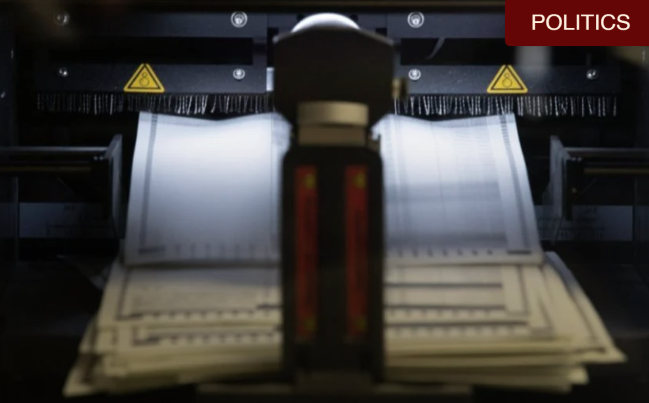 Arizona election officials’ use of voting machines in Maricopa County has once again cast a dark cloud over a highly contested election.

On Election Day, when most Republicans turn out to vote in elections, it was reported that voting machine problems caused delays in an estimated 20 percent of the polls in Maricopa County.

“I feel a hundred percent certain I am going to win,” Lake said. “The question is, how big will that win be? Can you believe this, Tucker? We still have 650,000 votes that have not been counted. And guess who these voters are? They Are the people who showed up on election day, right? They Are the people, 275,000 of them, are people who brought their mail in ballots to the polls on election day because they do not trust the mail and they do not trust the drop boxes. So guess who those voters are? There are voters, and we’re only down by a few thousand votes right now. When those votes come in, I think we’re gonna see a lot of liberal minds kind of blowing up.”

“They Have been calling me an election denier,” she went on. “I’ve been sounding the alarm on the 2020 November 3rd election, which was disastrous. And we had problems in the August 2nd primary as well. And now we have the same problems. They have all this time to get this figured out.”

“And you know where the main problems or 20% of those machines went down, the tabulator machines, and I noticed they were primarily in Republican areas of town, Arcadia, Anthem, a lot of different areas,” she said. “It was really a shame. We ended up voting in a very liberal part of town because we can choose which vote center to go to and they said they’d had no problems. The bigger issue is we cannot keep having this problem. This is what I’ve been trying to say. I want all Democrats, independents, and Republicans to trust in the system. And when I win and trust me, we will win this. This is going to be top of my plan.”

Political Rockstar Kari Lake delivered the good news on the ‘Louder with Crowder’ podcast with Steven Crowder that this estimate of early ballots delivered on Election Day is  384,000 votes, and she estimated that 2-to-1 or even 3-to-1 could break her way.

Now Maricopa County says *70* out of its 223 voting locations were impacted by printer problems on Tuesday, up from initial estimate of about 60. Election Day voters skew heavily Republican. What a joke.

“Now Maricopa County says *70* out of its 223 voting locations were impacted by printer problems on Tuesday, up from initial estimate of about 60,” Charlie Kirk noted. “Election Day voters skew heavily Republican. What a joke.”

This is what we were saying from the @GOP war room Tuesday and I announced with @KariLake at her presser after voting 11/8. At noon on Election Day, at least 27% of the voting centers had one or both tabulators not functioning, some also had printer malfunctions. Terrible fail! https://t.co/1lJUrTCqLt

“This is what we were saying from the @Republican Party war room Tuesday and I announced with @KariLake at her presser after voting 11/8,” Dhillon remarked on the tweet of an Arizona reporter with the Washington Post. “At noon on Election Day, at least 27% of the voting centers had one or both tabulators not functioning, some also had printer malfunctions. Terrible fail!”

A Maricopa County judge denied a Republican Party lawsuit that hours be extended to accommodate the voting machine errors.

The Liberal Washington Post was quick to dismiss any criticism of the dysfunctional voting machines on Election Day as triggering ‘unfounded fraud claims.’ 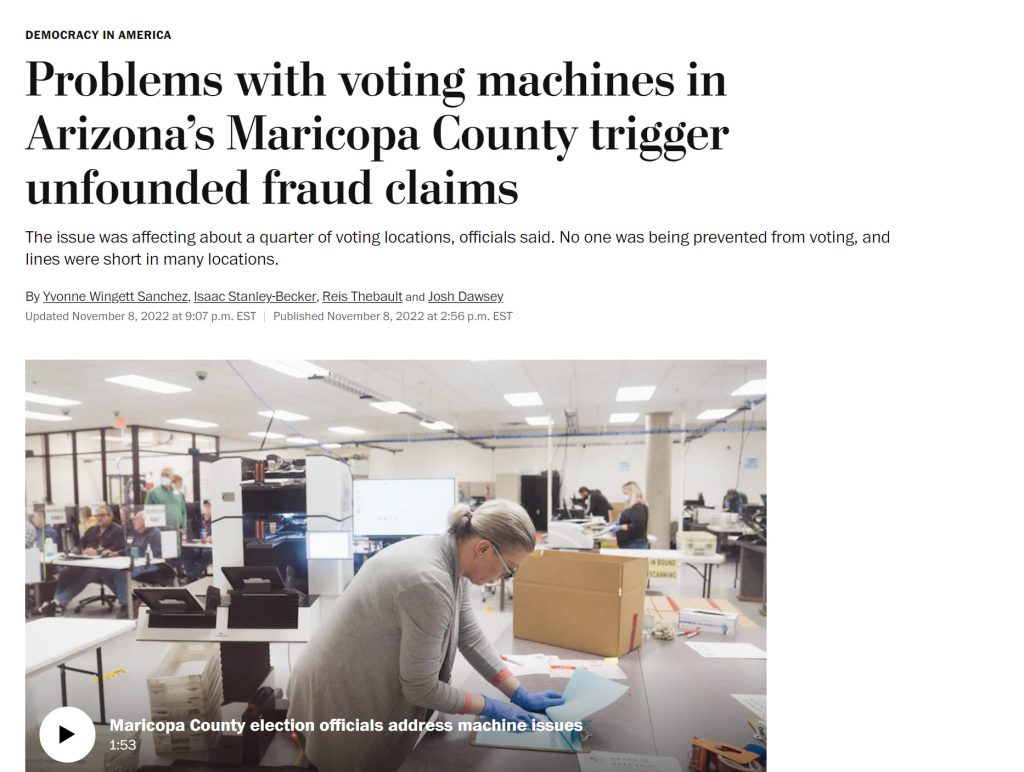 “Problems with vote-counting machines at some polling locations in Maricopa County, home to more than 60 percent of Arizona’s voters, became grist for prominent right-wing voices who deny the legitimacy of the 2020 election to claim without evidence that Tuesday’s vote was also fraudulent,” Liberal Washington Post complained.

“At about a quarter of the county’s 223 voting locations, vote-counting machines were unable to read some of the ballots that are printed on-demand for voters, county officials said,” the report added. “Technicians traveled around the county Tuesday changing the printer settings. In the meantime, election officials advised voters to either wait for tabulators to come back online, go to another voting location or to drop ballots in secure slots so they could be counted at the end of the day or in the coming days at the county’s tabulation center in downtown Phoenix, said Megan Gilbertson, spokesperson for the county’s election department.”

“County officials stressed that Nobody was being prevented from voting and that Nobody’s ballot had been mishandled,” the report went on. “They have said for weeks that ballot counting could take as many as 12 days.”

Perfectly normal according to the “democracy dies in darkness” publication, even though Florida counted 99% of its votes within a day, despite stringent election integrity safeguards. 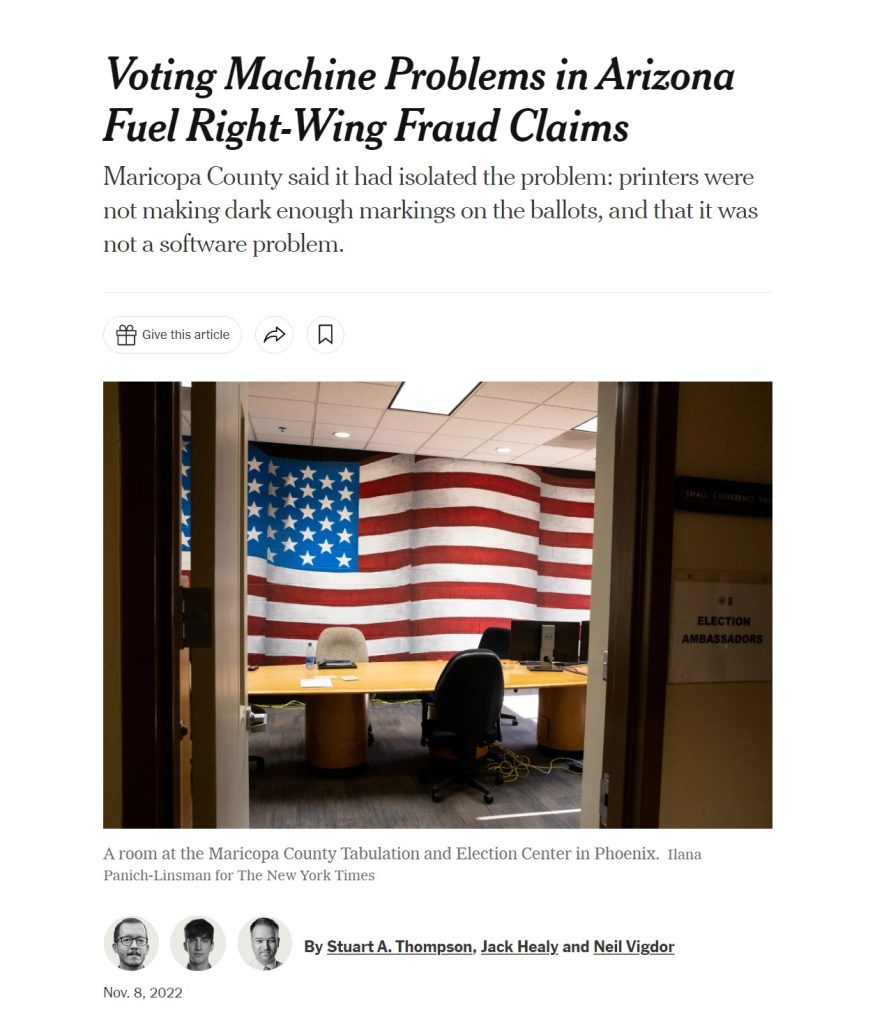 “A series of technical glitches disrupted ballot counting on Tuesday at about one in four voting centers in Republican-led Maricopa County, Ariz., rekindling embers of baseless voter fraud claims in the right-wing media and politicians,” the Times reported.

“Officials in Maricopa, one of the nation’s most populous counties and a focus of efforts to overturn the 2020 presidential election, said the problem affected ballot tabulation machines in about 60 of the county’s 223 voting centers,” the report added. “In the afternoon, the county said it had isolated the problem: printers were not making dark enough markings on the ballots.”

Katie Hobbs, who happens to be Political Rockstar Kari Lake’s opponent in the governor’s race, is the sitting Secretary of State. She did not recuse herself from presiding over Arizona’s elections during the 2022 midterms race. This has prompted no severe criticism from either the Washington Post or the New York Times.

The post The Arizona Voting Machines Disaster in Maricopa County is Even Worse Than We Thought appeared first on Becker News.

Click this link for the original source of this article.
Author: Kyle Becker

This content is courtesy of, and owned and copyrighted by, https://beckernews.com and its author. This content is made available by use of the public RSS feed offered by the host site and is used for educational purposes only. If you are the author or represent the host site and would like this content removed now and in the future, please contact USSANews.com using the email address in the Contact page found in the website menu.