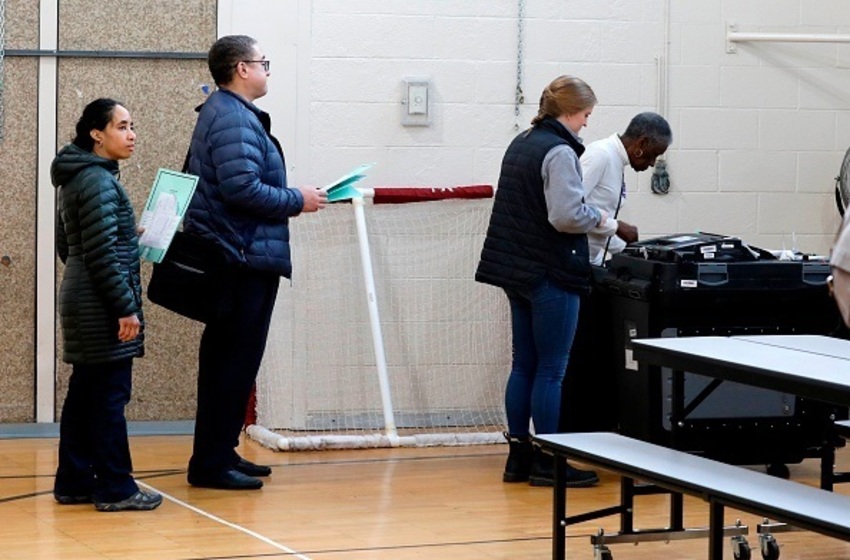 People wait to insert their ballots in a tabulation machine in Detroit, Michigan, on March 10, 2020. (Photo by JEFF KOWALSKY/AFP via Getty Images)

Powell alleges that votes cast through Dominion/Smartmatic were “wiped away.”

However, Dominion Voting Systems, in a message on its webpage, “categorically denies false assertions about vote switching issues.”

And in a statement on its website, Smartmatic says it “has never provided Dominion Voting Systems with any software, hardware or other technology. The two companies are competitors in the marketplace.”

Powell told Fox News’s Maria Bartiromo on Sunday that retired Admiral Peter Neffenger is president and a board member of Smartmatic:

And it just so happens he’s on Mr. Biden’s presidential transition team that’s going to be nonexistent, because we’re fixing to overturn the results of the election in multiple states.

And President Trump won by not just hundreds of thousands of votes, but by millions of votes that were shifted by this software that was designed expressly for that purpose. We have sworn witness testimony of why the software was designed. It was designed to rig elections. He was fully briefed on it. He saw it happen in other countries.

It was exported internationally for profit by the people that are behind Smartmatic and Dominion. They did this on purpose. It was calculated. They have done it before. We have evidence from 2016 in California. We have so much evidence, I feel like it’s coming in through a fire hose.

Bartiromo noted that Powell has very little time to prove fraud, since the election is supposed to be certified in early December:

“Well, let me put it this way,” Powell said.

First of all, I never say anything I can’t prove. Secondly, the evidence is coming in so fast, I can’t even process it all. Millions of Americans have written, I would say, by now. Definitely, hundreds of thousands have stepped forward with their different experiences of voter fraud.

But this is a massive election fraud, and I’m very concerned it involved not only Dominion and its Smartmatic software, but that the software essentially was used by other election machines also. It’s the software that was the problem.

Even their own manual explains how votes can be wiped away. They can put — it’s like drag-and-drop — Trump votes to a separate folder and then delete that folder. It’s absolutely brazen how people bought this system and why they bought this system.

In fact, every state that bought Dominion, for sure, should have a criminal investigation or at least a serious investigation of the federal — of the officers in the states who bought the software. We have even got evidence of some kickbacks, essentially.

Powell said she’s collecting evidence from various whistle-blowers, who are “aware of substantial sums of money being given to family members of state officials who bought this software.”

She also expressed fury at the U.S. government for ignoring complaints, even from Democrats such as Sens. Elizabeth Warren and Amy Klobuchar, who complained in 2019 about “secretive and trouble-plagued companies that are responsible for manufacturing and maintaining voting machines and other election administration equipment,” but have “skimped on security…leaving voting systems across the country prone to security problems,” including vote switching.

Powell said Dominion’s manual — “if you sat down and read it, would explain how and why no honest person would use this system. And it’s not just Dominion. There are other companies in the voting machine business in this country, too, that may very well and are likely using the same software.

“We have detected voting irregularities that are inexplicable and aligned with these problems in other states that think they have valid systems. But the people who bought the Dominion system, for sure, knew exactly what they were getting. It should never have been installed anywhere.

“And we are going to show the public exactly how rotten the entire state is.”

She called it “massive election fraud” that’s “going to undo the entire election.”

“In fact, we have got math in Michigan and Pennsylvania, I think it is, that, all of a sudden, hundreds of thousands of votes at a 67 percent ratio for Biden, 23 percent for Trump were uploaded multiple times into the system.”

Powell said she has a sworn statement from a witness who knows exactly how the alleged fraud worked.

President Trump, in a flurry of tweets over the weekend, wrote in all caps: “I WON THE ELECTION!”

He also alluded to problems with Dominion Voting Systems, which he said was “turned down by Texas and many others because it was not good or secure.”

“Why does the Fake News Media continuously assume that Joe Biden will ascend to the Presidency, not even allowing our side to show, which we are just getting ready to do, how badly shattered and violated our great Constitution has been in the 2020 Election,” Trump tweeted on Sunday.

“It was attacked, perhaps like never before! From large numbers of Poll Watchers that were thrown out of vote counting rooms in many of our States, to millions of ballots that have been altered by Democrats, only for Democrats, to voting after the Election was over, to using Radical Left owned Dominion Voting Systems, turned down by Texas and many others because it was not good or secure, those responsible for the safeguarding of our Constitution cannot allow the Fake results of the 2020 Mail-In Election to stand. The World is watching!”