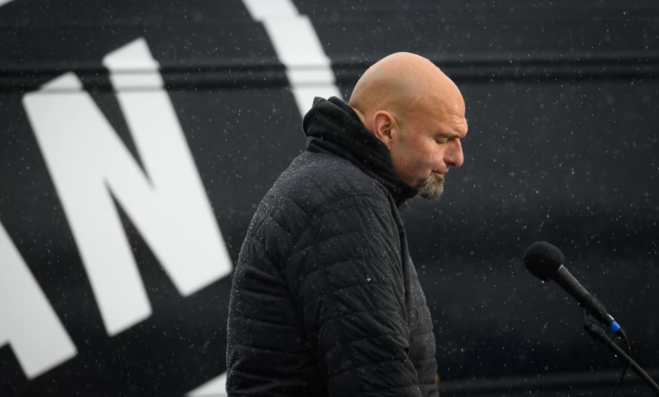 WILL DESTROY OUR COUNTRY- BACKED BY OBIDEN

EXPORT, Pennsylvania — For the first time in this election cycle, most of the people sitting around the restaurant bar casually watching the debate saw the depth of the effects of the stroke Lt. Gov. John Fetterman suffered from in May when he began the debate Tuesday evening with a “good night” as his opening greeting to viewers.

It only got worse from there.

For 60 painful minutes, the York native and Harvard graduate, who had made his home in Western Pennsylvania for the last 20 years, struggled vividly with cognitive issues in handling the simplest of questions tossed his way during the debate.

Most of the voters watching had surely seen him speak at small rallies, where he struggled but on the surface seemed OK. But only now were they fully realizing that he was just repeating memorized lines and could not actually comprehend when others tried to converse with him.

Many of those watching had no idea how bad Fetterman’s health was, causing disbelief that no one had reported this sooner. And many were angry that Democrats and reporters knew all about it and said nothing.

The one reporter who did mention Fetterman’s inability to converse — NBC news reporter Dasha Burns — was viciously attacked for her dispassionate reporting, not just from Fetterman’s campaign and supporters but also by blue-check journalists on Twitter and her own NBC News colleague Savannah Guthrie.

Unfortunately, the accurate story about Fetterman instead became a false story about Burns and even an attempt to destroy her career. This included a veiled threat from Fetterman’s wife, who used her large platform to demand an apology from Burns while threatening consequences for her reporting. One has to wonder what those consequences could have been.

And so the truth about John Fetterman’s cognitive abilities remained buried, a secret, but a secret well-known to journalists with personal access to him since late July and to those who have observed him failing to comprehend anything his supporters say to him on the rope line.

They said and wrote nothing. The question is, why? Were they afraid they would receive the vicious cancel treatment and threats that Burns got? Were they afraid they would hurt the political team they were not-so-secretly rooting for? Either reason is a stain on the journalistic profession — those culpable should really never again mock anyone who questions the honesty of the press.

The same goes for Democrats. Sen. Bob Casey, for example, his state party’s elder statesman, has paraded on the stage with Fetterman for weeks now, knowing full well how ill he is. After the debate, he had the audacity to go on national television and say with a straight face, “I think John Fetterman did really well.”

In the minutes and hours after the debate, Twitter’s reaction was very different from the voters’ reaction in the state. Blue-check journalists, pundits, and Democrats were doing some serious contortions to tweet that there was nothing to see there — Fetterman was fine, and Republicans are bad. The Philadelphia Inquirer even credited Fetterman with winning the debate.

Many of these same people have previously described Trump supporters as being part of a cult. But nothing is more cultish than to proclaim that nothing is wrong when clearly everything is wrong.

As one Philly voter said in an interview after watching the debate and then seeing the “Inky” calling the debate in Fetterman’s favor, “The Inky knows that Fetterman needs Philly to turn out in massive numbers to win,” he said. “And they know if they tell the truth to the voters that they would likely arrive at the same conclusion as most folks who watched that debate — and that is, Fetterman needs to get himself healthy and try again next time.”

The 41-year-old centrist Republican, who never once voted for Trump, said bluntly, “Philadelphians aren’t dumb, and their newspaper should know that; so they hide the truth from those who read the paper and missed the debate. This is exhibit A in why the public holds the media in low regard.”

The way this race has been covered from the beginning by reporters has been shameful — not just because of his stroke, but also because of the false narrative of Fetterman’s accomplishments in Braddock. Fetterman’s failure to show up at that job and at his current job started long before he had a stroke. There has been minimal scrutiny about what would, under other circumstances, be considered disqualifying — his holding a man at gunpoint for jogging while black and not apologizing for it — an incident that had long-term effects on Fetterman’s victim.

Fetterman still won’t release his medical records. For those wondering, the records need to come from a cardiologist, not in the form of a vague letter from a doctor who is one of his donors. Fetterman has a very serious heart condition that caused his stroke, which by his own admission went unattended for five years. The public also deserves records from a neurologist.

No one will know who wins this race until Nov. 8 —knowing my state, it might be Dec. 8 — however, whoever does win, there needs to be a serious forensic autopsy of how a confederacy of activism and omission placed the Democratic Party in this position, and why.