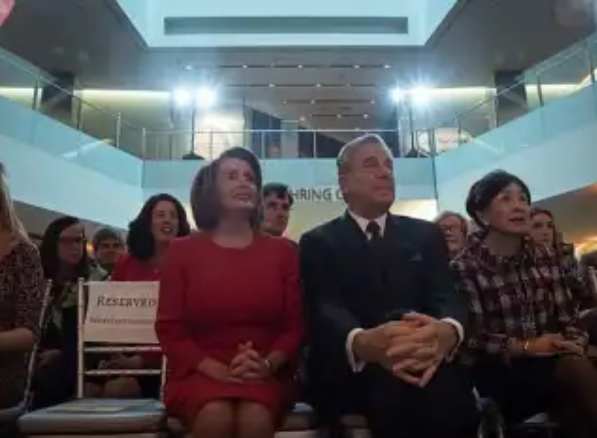 So yesterday, David DePape (42) pleaded not guilty to assaulting Paul Pelosi (82) on October 28. DePape was indicted on Federal charges by a Grand Jury of the DOJ as follows:

There are some real problems with the narrative of the mainstream media from the beginning. San Francisco Police Department bodycam videos have yet to be released, which are rumored to blow the entire Pelosi/MSM narrative. One detail repeatedly circulating the internet in both social media and blogs is both men were found in their underwear.

An NBC reporter got suspended in San Francisco for not sticking to the Pelosi/MSM script when he reported that Paul Pelosi actually opened the door for the police and then turned and walked back closer to DePape rather than take cover behind the police. That news report was almost immediately deleted by NBC but not before many downloaded it and spread it all over the internet.

“After a ‘knock and announce,’ the front door was opened by Mr. Pelosi. The 82-year-old did not immediately declare an emergency or tried to leave his home but instead began walking several feet back into the foyer toward the assailant and away from police,” said Almaguer in his November 4th report. “It’s unclear if the 82-year-old was already injured or what his mental state was, say sources.”

Initial reports said Speaker of the House Nancy Pelosi’s husband, Paul Pelosi, was not in danger when police arrived at his home following the break-in of last month. They then contend Depape violently struck Pelosi with a hammer so severe as to fracture his skull.

“We have been to many social events in the immediate vicinity as well. There are security cameras everywhere, and many homes have private security. Whatever happened, law enforcement should have plenty of evidence to get to the bottom of it and find the attacker(s).”

“I find it difficult to resolve the facts that Mr. Pelosi was beaten with a hammer, blunt force trauma to the head, but right away, we are told that he is expected to make a full recovery. A savage hammer beating… to the head… a 70+ year old man…”

“My firm served a lawsuit against Paul Pelosi one time in SF after attempting to serve at other residences—Napa, Georgetown. They weren’t home, but staff were, & multiple law enforcement officers were on the perimeter. Break-in is odd given this level of security.”

These two ladies expressed the thoughts of what many people found odd about the narrative of this Pelosi/MSM story.  Things just were not adding up. It is interesting the MSM thereafter tried to dismiss Ms. Dhillon’s questioning of the official narrative as “a Trump lawyer”. One supposed news source tagged her query as a “conspiratorial post”. More and more conspiracy theories are actually turning out to be the truth so…

How does her having been attorney for Donald Trump make her questioning the official narrative any less relevant when we are all wanting answers to the same questions?

Probably one of the first TRUE journalists who questioned the narrative and noted a litany of questions about the official narrative which were not adding up was Stan Greene of the “Santa Monica Observer.”

Greene recently updated his article with this:

“Update, 11.4.22: In Now Removed Report, NBC News says Pelosi Initially Told Police Everything was ‘Fine,’ and Walked back to Re-join DePape. NBC report says it is unclear what the two men were doing for 30 minutes before the San Francisco Police arrived at the Pelosi Residence.”

Another fine reporter is Buck Sexton of FOX News.  He recently did a guest hosting spot on the Tucker Carlson show where he not only played the deleted NBC news report of Miguel Almaguer but then went on to mock NBC for seemingly having company standards that hold you cannot tell the truth and go unpunished but you can lie and never have to apologize or issue a retraction as per recent treatment of former President Donald Trump.

Bottom line, I wanted to be a cop before I took an interest in journalism. If the police bodycam videos and local neighborhood home security videos are never released, assume the Pelosi’s and mainstream media are lying. There is absolutely no legal or logical reason to withhold these videos from the public IF the events went down, according to the conflicting official reports of the narrative!

Therein lies the problem, the SF DA and SF PD were not on the same page from the very beginning of this “story.”

Logically, if the Pelosi home was broken into by DePape, it should have triggered a silent alarm immediately with a police response time in a matter of minutes. California law enforcement agencies pride themselves in their response times to the homes of the rich and famous. I know; I toured Beverly Hills, where those response times were often posted on the walls and fences of the residences and were often less than 5 minutes.

Mark S. Schwendau is a retired technology professor who has always had a sideline in news-editorial writing where his byline has been, “Bringing little known news to people who simply want to know the truth.”  He classifies himself as a Christian conservative who God cast to be a realist.  Mark is an award-winning educator who has published seven books and numerous peer-reviewed trade journal articles, some of which can be found on the Internet.  His father was a fireman/paramedic, while his mother was a registered nurse.  He holds multiple degrees in technology education, industrial management, OSHA Safety, and Driver’s Education.  His personal website is www.IDrawIWrite.Tech.

3 Minutes of the Latest Crazy Media Stories About the Pelosi AttackOctober 29, 2022In “Home of News, Politics & Opinion”