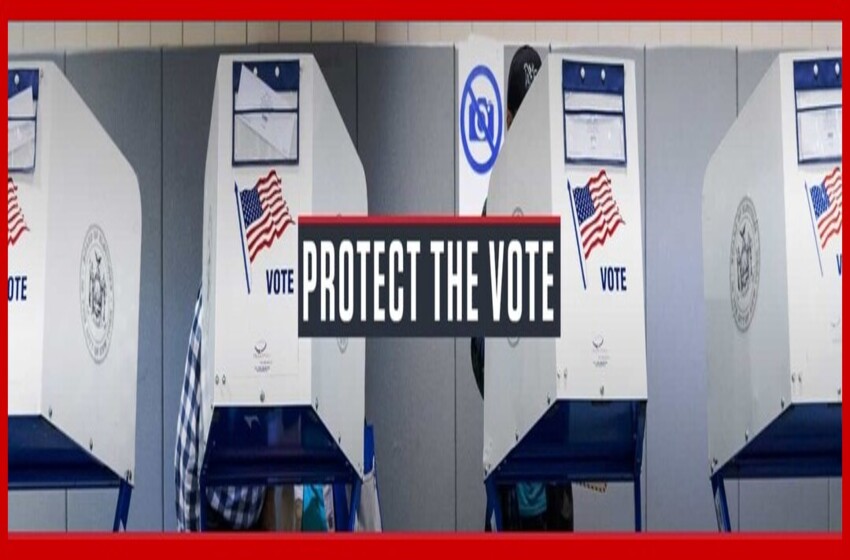 The RNC and the Trump campaign are aggressively fighting back against the Democrats’ assault on the integrity of our elections. All across the country, Democrats are trying to use coronavirus and the courts to legalize ballot harvesting, implement a nationwide mail-in ballot system, and eliminate nearly every safeguard in our elections.

Voters are on our side. Nearly two-thirds (62%) say there is fraud in U.S. elections, and that fraud would concern them under Democrats’ nationwide mail-in ballot system. Americans overwhelmingly approve of the safeguards Democrats are suing to eliminate like signature matching (84%), voter identification (80%), and a ballot receipt deadline of election day (83%). Voters also oppose (67%) allowing campaign workers to collect mail-in ballots, a practice known as ballot harvesting.

Americans deserve to have confidence in their elections, and we will not stand idly by while Democrats try to sue their way to victory in November.

LOCAL NEWS TRIES OUT MAIL-IN VOTING, ENDS IN DISASTER
DEMOCRATS LET BALLOTS BE TURNED IN 17 DAYS AFTER ELECTION IN CA
BALLOT HARVEST: THE FIX IS IN

Sending activists to strangers’ homes to collect ballots not only jeopardizes people’s health in this time of social-distancing, but it also threatens the security of ballots.

BALLOTS MUST BE REQUESTED AND NOT SENT TO INACTIVE VOTERS.

Democrats want ballots automatically mailed to “inactive” voters, including those who have moved or even passed away. Doing so is unnecessary, costly, and increases the chance for fraud and corrupt ballot harvesting. None of the five states that conduct all-mail elections send ballots to inactive voters. Washington, for example, requires voters to provide some identifying information in the return envelope. Democrats are arguing against these commonsense measures.

DON’T ‘FLIP A SWITCH’ ON OUR ELECTIONS

Democrats’ plans to upend our elections are unrealistic. States with widespread mail-in voting took years to roll out the process, not mere months. “You can’t just flip a switch and go from real low absentee ballots to 100 percent vote-by-mail,” according to Washington Secretary of State Kim Wyman. It took Washington 5 years to switch to all mail-in ballots.

TRUST VOTERS TO DECIDE HOW THEY WANT TO VOTE.

A nationwide mail-in ballot system disenfranchises voters by limiting their options, but the vast majority of voters (77%) want the security of the voting booth and the privacy it affords.

SECURITY MEASURES PROTECT THE PRINCIPLE OF ONE PERSON, ONE VOTE.

Safeguards like signature matching and photo identification must be preserved and enhanced. They secure the principle of one person, one vote, which in turn protects free and fair elections.

BALLOTS MUST BE CAST AND RECEIVED BY ELECTION DAY.

Receiving ballots after election day allows losing candidates to “go find” enough late votes to change the outcome. Moreover, any system that allows late-arriving ballots is ripe for weeks of prolonged litigation, which undermines the confidence and legitimacy of the election.

States should maintain primary responsibility for their voting laws. Americans overwhelmingly oppose (67%) Democrats attempt to nationalize our elections through a one-size-fits-all approach. Democrats couldn’t even count votes in Iowa, and now they suddenly believe they can redesign the entire U.S. election system in a matter of a few months.

IN THE NEWS
THE UNNECESSARY RISKS OF MANDATED AND RUSHED VOTE-BY-MAIL
Vote-By-Mail, Explained
Continue Reading
RNC, TRUMP CAMPAIGN FIGHT BACK AGAINST DEMOCRATS’ ELECTION ABUSES
See you in court
Continue Reading
AN INVITATION IN THE MAIL FOR ELECTION FRAUD
‘There’s no way of knowing how many nonresidents will receive ballots’
Continue Reading
VICTORIES

In Wisconsin, the RNC won a big victory at the U.S. Supreme Court, which overturned an unprecedented lower court ruling that would have allowed ballots to be cast after election day. The RNC also worked with the Wisconsin Republican Party to obtain a victory for election integrity at the state Supreme Court by thwarting rogue election officials’ illegal guidance regarding identification requirements for absentee voters.

In California, the RNC, Trump Campaign, and California Republican Party quickly and effectively challenged an unconstitutional California law targeting Republican voters that would have required President Trump to release his tax returns in order to participate in the state’s primary. Two separate courts noted that the law violated the U.S. Constitution on multiple grounds, exceeded the state’s authority, and also violated the California State Constitution which guarantees voters the right to choose freely from nationally recognized candidates. This stunt by Democrats to deny millions of Californians the ability to vote for President Trump was unconstitutional, desperate, and a real attempt at voter suppression. Also, in response to our litigation, Governor Newsom was forced to admit he exempted campaign operatives from his stay-at-home order and would allow them to engage in ballot harvesting, regardless of risks to public health.

In Florida, the Republican Party defended a longstanding state law that placed President Trump and Republicans at the top of the ballot. Democrats attempted to roll back the law and were dealt a major blow in the courts. We won another huge victory in Nielsen v. DeSantis. A Clinton-appointed judge denied Democrat attorneys’ motion for a preliminary injunction in a radical lawsuit they brought to try to count ballots that arrive after Election Day and prohibit the state’s ban on ballot harvesting. Democrats have since dropped their radical case, scoring another win for Republicans and election integrity.

In New Mexico, the party intervened and successfully defended against a lawsuit trying to force the state to automatically mail ballots to all voters without requiring them to applying for one first.

In Pennsylvania, the RNC, NRCC, and Pennsylvania Republican Party in Disability Rights PA v. Boockvar. Plaintiffs, left-wing groups seeking to re-write Pennsylvania’s election laws, asked the court to require Pennsylvania to count ballots delivered after Election Day. The court held that the left-wing Plaintiffs had failed to demonstrate that anyone would actually be harmed by Pennsylvania’s existing vote-by-mail laws, which provide voters with 50 days in which to request and return a vote-by-mail or absentee ballot.

The RNC, NRCC, and Pennsylvania Republican Party also successfully defended against a requested injunction in Crossey v. Boockvar. Left-wing plaintiffs represented by Marc Elias and Perkins Coie asked the court to re-write Pennsylvania’s election laws to allow ballot harvesting, require the Commonwealth to count ballots delivered after Election Day, and gut signature match requirements. The court denied that request finding that the Plaintiffs were unlikely to succeed with their claims.

When Democrats want to tilt elections in their favor outside the ballot box, who do they call? Marc Elias and Perkins Coie.

If you need a refresher, Perkins Coie is the Democratic law firm, paid by the Hillary Clinton campaign, that hired Fusion GPS to dig up dirt on Donald Trump in 2016. They failed, but still compiled a dossier full of foreign-solicited lies about Trump and Russia, which was leaked by Obama intelligence officials to try to sabotage the new president’s administration, sow doubt in his election victory, and invalidate the votes of 63 million Americans. Not the best track record on “integrity.”

It’s no wonder that Elias is taking the phrase “never let a crisis go to waste” to the heart during the coronavirus. From Wisconsin to Nevada, to California, Marc Elias and the Democrats are continuing to push their liberal agenda disguised as supposed “election reform.” But what they really are doing is watering down important election safeguards and increasing the opportunity for rampant fraud, abuse, and corruption.

THE DEMOCRATS ARE TRYING TO RIG THE ELECTION!

The Do Nothing Democrats know they can’t beat us at the ballot box, so they are waging an assault on the integrity of our elections.

We can’t let them get away with this – we must FIGHT BACK!

Please add your name to our Official Protect the Vote Petition by 11:59 PM TONIGHT to stand with us against the Radical Left!