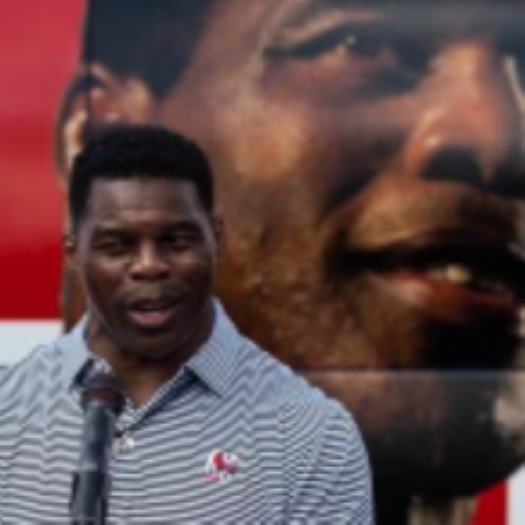 Walker, tied with Warnock in a race that could decide the Senate majority, opened his Sunday afternoon remarks to about 350 supporters gathered outdoors with a story about a man who dies early in life. The man meets St. Peter, who offers him a choice between heaven or hell. After the man glimpses both, he chooses hell, because everyone there seemed to be having so much fun.

But when the man descends to hell, permanently, Walker explains, “it’s hot, people are miserable, they’re screaming, they’re crying. And the guy says, ‘Wait a minute, wait a minute … when I was here, there was a party going on.’ And Satan shows up and says: ‘A couple of hours ago, I was campaigning.’”

Walker, referring to himself as a “warrior for God,” said the allegory describes Warnock and the Democrats.

“My opponent, Sen. Warnock, is campaigning — and people on the Left, they’re campaigning, they’re lying to you,” Walker said. “I will tell all of you to vote for me, and we all going to get to the promised land. We going to get there together, or we won’t get there at all.”

REPUBLICANS ON A ROLL

Walker’s address, lasting just under 20 minutes, was a variation of the campaign speech he has been giving on the trail in the homestretch of a bitter Georgia Senate race pitting two heavyweight black politicians — Warnock a dynamic Christian pastor, Walker a charismatic former professional football player — against each other.

In between stories and comments thick with religious overtones, Walker kept returning the focus of his comments to skyrocketing inflation, rising crime, and foreign policy challenges abroad, saying President Joe Biden and Warnock were complicit in perpetuating economic hardship and national decline. Walker’s sharp indictment of Warnock came one day after the Democratic incumbent questioned the Republican’s fitness for office, saying he should stick to football.

“I wasn’t much good at football. I played in the band. I knew my lane,” Warnock said Saturday while rallying Democratic field volunteers in Augusta, Georgia. “Herschel Walker needs to stay in his lane.” On Sunday, Warnock was campaigning in Savannah, with an early evening get-out-the-vote rally set for a church parking lot.

Joining Walker in Hiram, an exurban community 27 miles northwest of Atlanta, was Nikki Haley, the former South Carolina governor and ex-U.S. ambassador to the United Nations under former President Donald Trump. Haley was the warm-up act, tearing into Biden and Warnock — and leading the crowd in choreographed cheers of “Walker” and “Senate” and “vote.” As in, a vote for Walker is a vote to hand Republicans the Senate majority.

Walker has the late momentum in this contest, not unlike the situation many Republicans running for Congress find themselves in just hours before Election Day. Haley cautioned the crowd not to get comfortable with predictions of a building red electoral wave poised to sweep Republicans into power in the House and Senate. Ousting Warnock and wining the Senate majority depended, she said, on robust voter turnout by Georgians inclined to support Walker.

“We’re going to vote, and we’re going to win,” Haley said. “But don’t listen to this red wave stuff they’re talking to you about. The win that will happen in Georgia will simply be based on turnout. Do more of us show up than they do?”

Walker, who led the University of Georgia football team to a national championship in the early 1980s, has been a beloved figure in Georgia for decades. The enthusiasm behind his support among Republican voters is plainly evident. But in interviews with more than half a dozen of these voters who showed up Sunday to see Walker, nearly all said Republicans winning Senate control was a key factor behind their vote.

They sounded realistic about the obstacles Walker and a new GOP Senate majority would face with Biden still in the White House, not to mention the filibuster. Still, putting the brakes on the president and his legislative agenda was enough to motivate them to pull the lever on Tuesday.

“I really like him as a candidate,” Shellie Durrance, 59, said. “But do we need help in the Senate? Yes.”