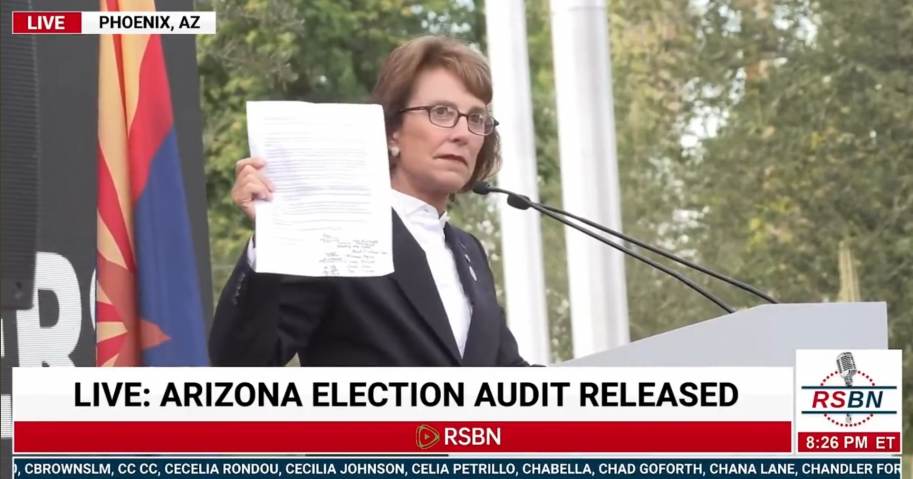 Today, we finally saw the long-awaited results from the Arizona Senate’s historic full forensic audit of the 2020 Maricopa County election.

Hundreds of Arizonans showed up to attend the audit report’s grand reveal. The gallery on the inside of the chamber was full and a large crowd watched the livestream video from outside the building on a big screen that was set up earlier in the day.

Once the senate hearing was finished, AZ State Senator Wendy Rogers took the stage outside to address the anxious crowd about the findings that confirm thousands of fraudulent votes were counted in November.

During her address, Rogers unveiled a letter that had been signed by 41 different legislators from multiple states, calling for a nationwide audit and decertification of every state where fraudulent votes changed the outcome of the election.

“This is our new declaration of independence. This is our manifesto of freedom.”

Watch Rogers read the letter to the crowd in its entirety:

BREAKING: Sen. Wendy Rogers unveils letter signed by 41 state legislators from across the country calling for forensic audits in each state, and urging their states to decertify the 2020 election if their audit results mirror those in Arizona. pic.twitter.com/Fd7mytHLX5

Rogers has been busy lately, traveling from state to state in order to convince other lawmakers to conduct forensic audits that mirror the ongoing one in Arizona. (Auditors in AZ are still looking at election data and equipment that has been withheld by the county)

It looks like her efforts have been paying off, but we still have a lot of work to do.

The full text of the letter, as well as the full list of 41 lawmakers who signed, was tweeted out by Senator Rogers shortly after she spoke to the crowd.

41 Legislators from Multiple States Write a Letter to the American People Calling for a 50-State Audit, Decertification Where Appropriate, and Possible Convening of the US House of Representatives pic.twitter.com/Hoz6zUBtZq

The results of Arizona’s historic