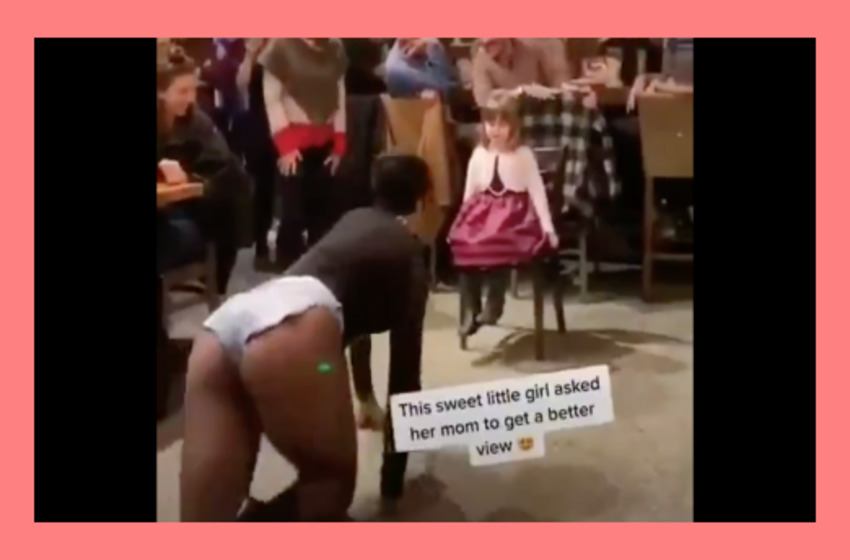 A video uploaded to the social media site TikTok shows a little girl in a pink dress sitting in a chair as a drag queen dressed in butt-bearing, cutoff shorts crawls toward her on the floor like a stripper before getting up and gyrating in a heavily sexualized dance, all while adults sit around with drinks and cell phones in their hands, cheering on this insanity.

The video, uploaded by TikTok user Amelia Marino on Feb. 9, includes the captioned claim that the little girl “asked her mom to get a better view.” Because, as we all know, small children often request to watch half-naked men dressed like strippers roll around on the floor.

The Daily Caller confirmed the “performer” in the video is Tynomi Banks, a Canadian drag queen who identifies as a female.

It’s vile. It’s hard to watch. It’s the kind of thing I normally shy away from uploading into my blogs, because it’s not only an all-out assault on the eyes and the gag reflex, but also any concept of human decency. And because I don’t like providing visual windows into child abuse. Which this is, no question.

But it’s also important. Videos like these are necessary viewing for a society that has largely accepted, in practice if not in principle, the parading of lewdly dressed men in high heels and heavy makeup in front of young children, while grown adults watch and cheer. Videos like this one of a drag queen performing a strip tease for children at King County Library in Washington State. Or this one, in which a drag queen sat in front of toddlers reading books while wearing a skirt so short, the children were exposed to a front-row view of his panty-lad crotch. Or this one out of England, in which a drag queen teaches kids how to “twerk.”

Yes, it’s disgusting. Yes, it’s stomach-churning and horrendous. And you should watch every single second of it, because it’s here. And for some odd reason, no one seems particularly intent on stopping it.