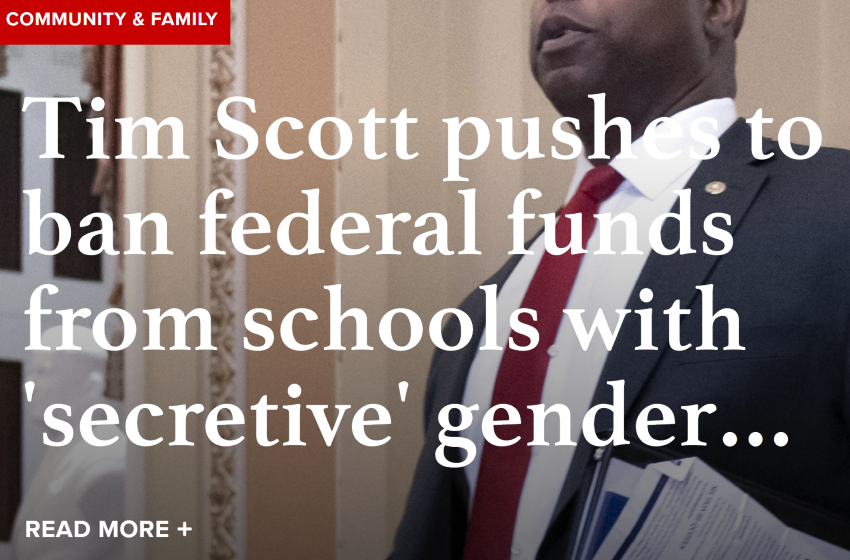 EXCLUSIVE — Sen. Tim Scott (R-SC) is seeking to cut off federal funds from public elementary and middle schools that do not first obtain parental consent before addressing a student by a different pronoun or name.

The senator introduced the Protect Kids Act Tuesday, which would require any school receiving federal funding to seek and obtain consent from a student’s parent prior to changing the child’s name on official documents. The funding ban would also apply to schools that don’t receive parental consent before addressing the student by pronouns apart from their biological sex or allowing the student to use different bathroom and locker room facilities.

“Schools exist to educate children — not indoctrinate them,” Scott said in a statement to the Washington Examiner. “A quality education requires input from those who know children best: their parents. Sadly, radical and secretive gender policies have shut parents out of the conversation and broken their trust.”

The bill’s text specifically cited an incident in Fairfax County Public Schools in Virginia, where teachers were instructed on how students were allowed to change their name and pronouns in school settings without parental notification or consent.

The training was first reported by the Washington Examiner and was an extension of the school district’s policy regarding transgender students. Numerous other school districts around the country have had similar policies, and a handful of districts have been sued by parents after their child was encouraged to embrace a different gender identity at school.

The Fairfax County Public Schools program caught the attention of Gov. Glenn Youngkin (R-VA), who blasted the training last month, saying “progressives in Fairfax County actually believe that they should lock parents out of their children’s lives.”

The Youngkin administration released new statewide policy guidelines last week that say school districts should only accommodate the preferences of minor students identifying as transgender with written permission from the child’s parent.

Scott has an uphill climb in getting his legislation passed with Democrats in control of Congress and the White House. But the effort shows the battle lines Republicans are drawing before the midterm elections as they campaign on parental rights.

“My bill will safeguard parental rights, improve the crucial relationship between parents and schools, and ensure that children can learn in an environment free from activist ideology,” Scott said.

The fourth Taiwan Strait slip-up
By: Zack Cooper
At the United Nations, it’s politics as usual for Biden
By: James Jay Carafano
Uncool: Biden pushes Senate to ratify treaty that would raise cost of air conditioning
By: Katie Tubb

Sign up now to get the Washington Examiner’s breaking news and timely commentary delivered right to your inbox.
TRANSGENDER ISSUESTIM SCOTTEDUCATIONWASHINGTON D.C.PUBLIC SCHOOLSNEWSNEWSLGBT
Share your thoughts with friends.
Share on: