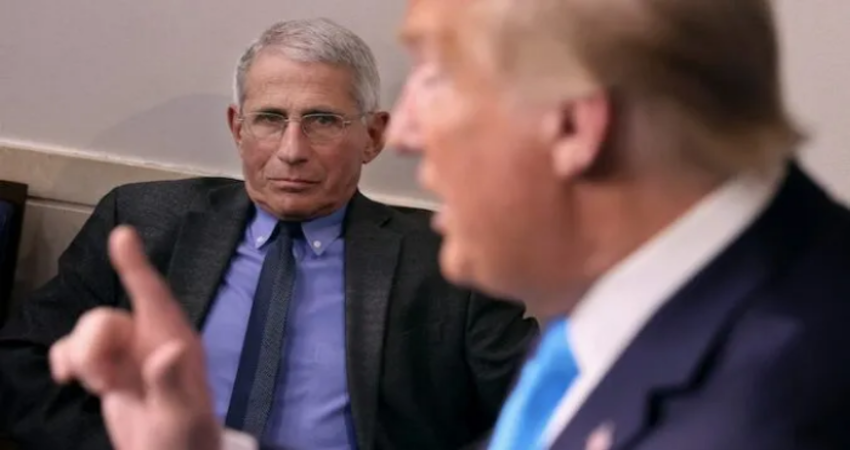 The COVID-19 lab-leak theory was initially dismissed by some of America’s top scientists because President Trump promoted it, according to reports.

“At the time, it was scarier to be associated with Trump and to become a tool for racists, so people didn’t want to publicly call for an investigation into lab origins,”said Alina Chan, one of the 18 scientists who wrote a letter acknowledging the plausibility of the lab-leak-theory, in an interview with NBC News.

Wnd.com reports: Chan is a postdoctoral associate at the Broad Institute of MIT and Harvard University who specializes in genetic engineering.

On its website, NBC titled its Wednesday story about the interview “The science around the lab leak theory hasn’t changed. But here’s why some scientists have.”

Chan said there had been trepidation among some scientists about publicly discussing the lab leak hypothesis for fear that their words could be misconstrued or used to support racist rhetoric about how the coronavirus emerged. Trump fueled accusations that the Wuhan Institute of Virology, a research lab in the city where the first Covid-19 cases were reported, was connected to the outbreak, and on numerous occasions he called the pathogen the “Wuhan virus” or “kung flu.”

One year ago, at the White House, Trump was asked by a reporter: “Have you seen anything at this point that gives you a high degree of confidence that the Wuhan Institute of Virology was the origin of this virus?”

“Yes, I have. Yes, I have,” Trump replied. “And I think the World Health Organization [WHO] should be ashamed of themselves because they’re like the public relations agency for China.”

The Washington Post had a similar explanation for the sudden openness to the lab-leak theory in a story last month titled “Timeline: How the Wuhan lab-leak theory suddenly became credible.”.

The author, Glenn Kessler, who writes the Post’s “Fact Checker” column, said that in “recent months the idea that [the virus] emerged from the Wuhan Institute of Virology (WIV) – once dismissed as a ridiculous conspiracy theory – has gained new credence.”

He said the Trump administration’s “messaging was often accompanied by anti-Chinese rhetoric that made it easier for skeptics to ignore its claims.”

Trump, however, argued he was using the conventional nomenclature regarding pandemics, based on their place of origin, such as the “Hong Kong flu.” His use of the terms China and Wuhan, he repeatedly emphasized, was in reference to the Chinese Communist Party, charging the government was engaged in a deadly and costly cover-up.

The Wall Street Journal reported that when Trump began pushing the lab hypothesis last year, other governments that could have helped press for a lab investigation distanced themselves from the administration, according to Andrew Bremberg, who at the time was the U.S. ambassador to the World Health Organization.

“It was like an overnight shift,” he said. “When the president first touched this, they shut down.”

The letter by Chan and others published by the journal Science followed an 11,000-word breakthrough analysis in early May by Cambridge-educated science journalist Nicholas Wade, a former New York Times columnist and editor for the journals Science and Nature.

Wade has concluded that the circumstantial evidence points overwhelmingly to a lab leak.

About 10 days after Wade’s analysis was published, White House coronavirus adviser Dr. Anthony Fauci admitted in an interview that the lab-leak theory was plausible.

Fauci insisted in an interview Wednesday that he’s always urged people to be open to the lab-leak theory of the origin of the novel coronavirus pandemic.

But he clearly denounced the theory until shortly after the publication of Wade’s analysis. And Fauci was personally thanked for dismissing the lab-leak theory by Peter Daszak, the virologist whose controversial research on bat coronaviruses at the Wuhan Institute of Virology was funded by Fauci’s National Institute of Allergy and Infectious Diseases, NIAID.

“Look, we’ve always said people should keep an open mind about the lab-leak theory,” Fauci told the CBS show “This Morning” on Wednesday.

But an interview in May 2020 with National Geographic magazine typified his postion over the past year, saying the scientific evidence “is very, very strongly leaning toward this could not have been artificially or deliberately manipulated.”

“Everything about the stepwise evolution over time strongly indicates that [this virus] evolved in nature and then jumped species,” he told the magazine.

In February 2020, Daszak authored a letter published by the prestigious medical journal The Lancet that mocked anyone who suggested the virus came from the Wuhan lab.

Daszak’s letter was widely cited by establishment media and became the last word on the subject.

“I just wanted to say a personal thank you on behalf of our staff and collaborators, for publicly standing up and stating that the scientific evidence supports a natural origin for Covid-19 from a bat-to-human spillover, not a lab release from the Wuhan Institute of Virology,” Daszak wrote.

Click this link for the original source of this article.
Author: Nwo Report