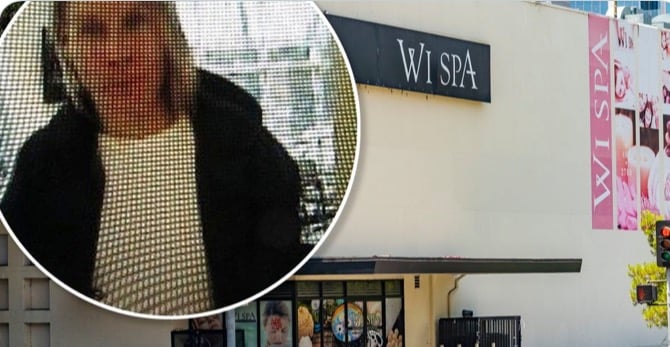 The transgender pervert who exposed his genitals to women and little girls at Wi Spa in Los Angeles last year was arrested and charged with five felony counts of indecent exposure.

Darren Agee Merager, a convicted sex offender, was arrested last Tuesday more than a year after he exposed himself to women and minor girls at Wi Spa.

Recall, Wi Spa made headlines last year when a female customer freaked out after seeing a biological male walking around with his penis out around children in the women’s section at Wi Spa.

The viral video prompted another woman to come forward and share a similar terrifying experience at the same Korean spa.

The woman, who obscured her identity and goes by “Anita” out of fear of being cancelled, said she was shocked to find a person with a “beard and penis” in the women-only hot tub.

A transgender person wanted for exposing their naked, half-erect penis to women in two separate changing room incidents in Los Angeles has been arrested after more than 15 months on the run.

The suspect, 53-year-old Darren Agee Merager, had been charged with five felony counts of indecent exposure for the incidents – including an infamous altercation at Wi Spa, where Merager exposed herself to several women, including an underage girl.

Merager – a convicted sex criminal who identifies as a woman – had previously rebuffed the allegations, claiming to be a victim of transphobia.

Also unearthed was a warrant for the sex pest’s arrest for a separate locker room incident in December 2018, and a laundry list of offenses stretching nearly two decades, including burglary and trespass.

Last Tuesday, more than year after going on the lam in September 2021 – three months after the Wi Spa incident – Merager was booked by LA police for the spa and pool incidents, with a bail set at $350,000. He remained incarcerated Monday.

A biological male, Merager – who said he would fight his case in court before suddenly going on the run in September 2021 – faces 11 charges in total for the pair of incidents, where she allegedly used his status as a transgender woman to access women’s changing areas and show his partially erect penis to those inside.

Antifa terrorists got walloped by LAPD last year after the far-left terrorists showed up to ‘counter-protest’ outside of Wi Spa in Los Angeles.

Protesters arrived outside the Korean spa, calling for women-only spaces – and Antifa showed up to defend the perverts and pedophiles who expose their penises to little girls under the