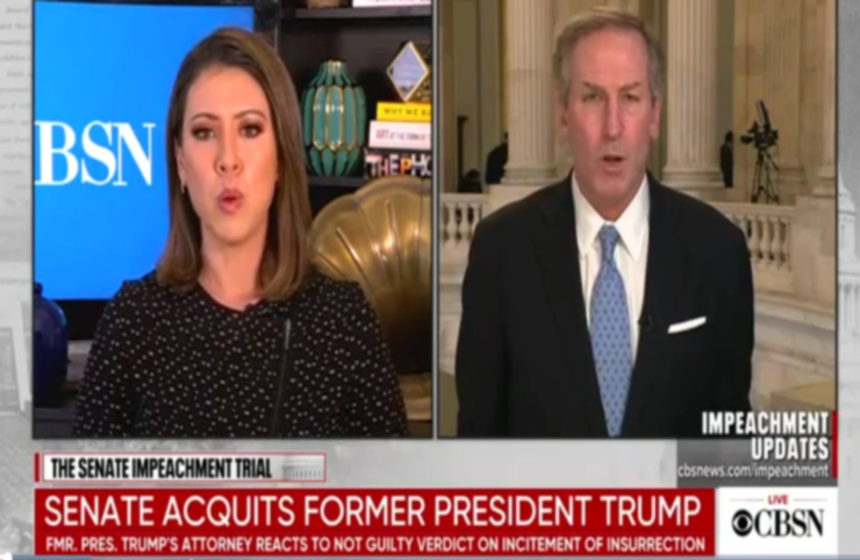 Donald Trump’s defense attorney Michael van der Veen unleashed on the media after the Senate voted to acquit the former president of inciting an insurrection on Jan. 6.

“Prosecutors in this case doctored evidence. They did not investigate this case, and when they had to come to the court of the Senate to put their case on, because they had not done any investigation, they doctored evidence. It was absolutely shocking. I think when we discovered it and were able to expose it and put it out, I think it turned a lot of senators,” he continued.

Zak interjected, “To be clear for our viewers, what you’re talking about now is a check mark, a verification on Twitter that did not exist on that particular tweet 2020 that should have actually read 2021. And the selective editing, you say, of the tapes.”

Recommended For You
Rural Californians are fighting to reclaim their state, even if that means starting their own
Through Joe Manchin, West Virginia rules the roost
Whitmer calls for political civility in speech to business leaders

Van der Veen pushed back on her comment, asking if “that is not enough for you?”

He then launched into an attack on the media for being “biased” and “bloodthirsty for ratings.”

“The media has to start telling the right story in this country. The media is trying to divide this country. You are bloodthirsty for ratings, and as such, you’re asking questions now that are already set up with a fact pattern. I cannot believe you would ask me a question indicating that it is all right to doctor a little bit of evidence,” he said.

“When I watch the news, I watch one station, and it is raining. And I watch another station at the same time, and it is sunny. Your coverage is so slanted, it’s got to stop. You guys have to stop and start reporting more like PBS does rather than TV news show that does not have any journalistic integrity at all. What I’m telling you is they doctored evidence,” he said.

Van der Veen was referencing tweets from Jennifer Lynn Lawrence, which showed a blue checkmark next to her Twitter account during the Senate impeachment trial, despite her not being verified on the platform. A senior impeachment aide said the inclusion of the blue checkmark was an accident.

“What this country wants, what this country needs is this country to come together, to take the Left and the Right and find a middle ground … the media wants to tell their narrative rather than just telling it like it is. Frankly, I’m tired of it,” he continued during the interview.

As the interview wrapped up, van der Veen was seen crossing his arms and then taking his microphone off and throwing it down as Zak began concluding the segment.

The exchange has gone viral on social media, raking up nearly 3 million views on the clip shared by CBS News on Twitter.