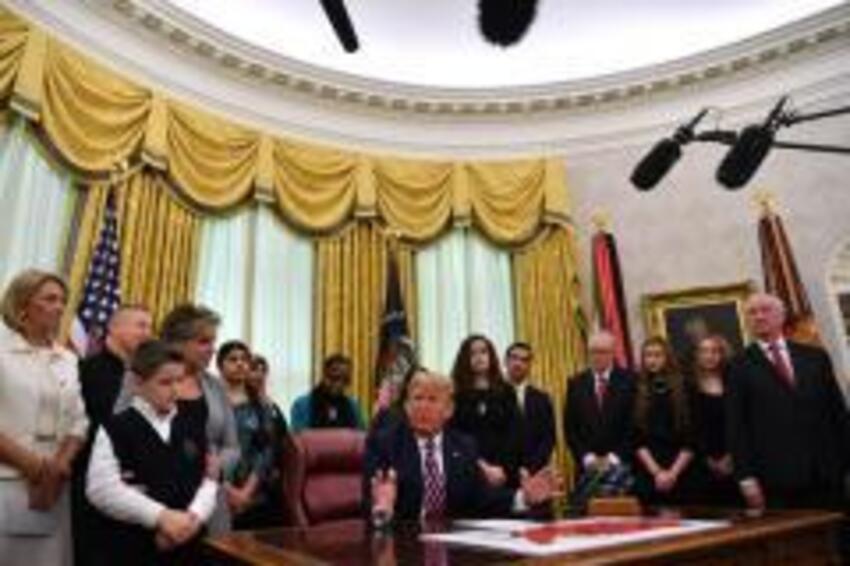 “This afternoon, we’re proudly announcing historic steps to protect the First Amendment right to pray in public schools.  So you have the right to pray, and that’s a very important and powerful right.  There’s nothing more important than that, I would say,” Trump said.

He was joined in the Oval Office by Education Secretary Betsy DeVos and Deputy Attorney General Jeffrey Rosen as well as students and prayer advocates from across the country.
Trump said that “government must never stand between the people and God.”

“Yet, in public schools around the country, authorities are stopping students and teachers from praying, sharing their faith, or following their religious beliefs.  It is totally unacceptable.  You see it on the football field.  You see it so many times where they’re stopped from praying, and we are doing something to stop that,” he said.

“Tragically, there is a growing totalitarian impulse on the far-left that seeks to punish, restrict, and even prohibit religious expression.  Something that, if you go back 10 years or 15 years or 20 years, it was un-thought of that a thing like that could even happen — that anybody would even think of something like that happening,” the president said.

“That is why, today, my administration is issuing strong new guidance to protect religious liberty in our public schools.  The right of students and teachers to freely exercise their faith will always be protected, including the right to pray,” Trump said.

“Nine federal agencies are also proposing new rules to roll back discriminatory regulations.  So we have rules to roll back discriminatory regulations on religious service organizations, and earlier this afternoon, my White House released a new memo to make sure federal funding is never used to violate the First Amendment — which is a very big deal,” the president said.

Hannah Allen, a high school freshman from Texas who attended the event, explained how she was told by her school that she and her classmates had to hide to pray.

“So, me and a group of students from our school wanted to pray for our former classmate’s brother who had got hurt in an accident.  After the prayer, our principal told us, ‘Don’t do that again.’ So the next day, parents had called and complained. He told us that we could pray, but he said we had to hide in the gym or behind a curtain, or somewhere away from everyone else,” she said.

“And I know that if this can happen in a small town in Texas, it can happen anywhere across America, and that’s not right. No one should feel ashamed of their faith, especially in school or anywhere,” Allen said.

She explained that the students sought help from the First Liberty Institute, a legal group dedicated to helping protect religious liberty.

“So we got with First Liberty.  They’ve been amazing.  They supported us the whole way, and they sent the school a letter, and the school complied with the letter,” and now the students are allowed to pray in school, Allen said.

Also on hand was Marilyn Rhames, founder and president of Teachers Who Pray. She explained why she founded the group:

I founded Teachers Who Pray because I, as a teacher, believe in the beauty of every child and the unlimited potential that resides within. However, the students that I was getting weren’t set up for success, because they were so significantly behind grade level, and I taught in Chicago Public Schools for 14 years.

And during that time, we were losing students every year to gun violence, and one year, it was like 30, 32 students getting killed, and I was overwhelmed with the heaviness of the work, so I thought about quitting, and I decided not to. I was going to fight, and I was going to pray and uplift my spirit so that I can do the job that I knew God had called me to do.

“So I began praying with other teachers in the building who were like-minded, and we really supported each other, built community, built more hope, built more joy in the work despite it being so difficult, and we grew. Like, right now, there’s over 150 chapters of Teachers Who Pray because teachers need that spiritual support and guidance.

And today, I believe it’s super important, because there is a myth out there that what Teachers Who Pray does and other organizations do for teachers’ spiritual wealth is not legal, and it absolutely is. And I’m here to tell teachers that we need to pray for your faith. We need to pray. We need to buckle and just do what we have to do for our kids, because they need us, and they’re depending on us. And if we’re not strong, we can’t make them strong. So that’s why I’m here.

Trump pledged that his administration will “not to let anyone push God from the public square.” He said they will “uphold religious liberty for all.”

DeVos thanked Trump for his leadership, courage and “friendship to people of faith, especially our nation’s children.”

“Too many misinterpret a separation of church and state as an invitation for government to separate people from their faith,” the education secretary said. “In reality, our Constitution doesn’t exist to protect us from religion. It exists to protect religion from government. The First Amendment affirms our free exercise of religion, and we don’t forfeit that first freedom to anyone or in any place, especially in public schools.

“After all, it’s been noted that as long as there are final exams in schools, there will be always be prayer in schools,” DeVos joked.

“Thanks to your leadership, Mr. President, today we remind schools of the law with respect to religious expression — something that hasn’t been done in more than 15 years – and where there are violations, we now make clear that the law requires states to establish a clear process for students” who want to pray in school and face opposition, she said.

The law also directs states to notify the administration about all complaints as well, DeVos said. The administration will ensure that “all believers have the freedom to learn, to pursue our passions, to use our talents, and to live in accordance with the unique purpose that God has called us each to do.”

“If we embrace that freedom, our faith will be a light no darkness can overcome,” the education secretary added.

The DOJ is “committed to enforcing Americans’ constitutional rights, including this one.  So that’s part of why I’m very honored and privileged to be a part of today’s announcement on the new guidance document about prayer in school,” Rosen said.

“I think sometimes people don’t appreciate that there are many, many Americans who feel called to pray during the day, and our First Amendment to our Constitution protects that, and sometimes I think there’s a confusion about this issue as to whether it’s trying to force people to pray who don’t want to, but that’s not what this is about,” the deputy attorney general said.

“This is about protecting the rights of those who do to have the liberty to do that on school grounds, and that is protected by the First Amendment. So today’s guidance reaffirms and clarifies and spells out for Americans what that freedom is with regards to prayer and religious expression,” he said.

“And I really think that the courage of people of faith, such as the folks we have here today, is really a reminder of how important our constitutional liberties are and of the great action that your administration is taking to ensure that they remain legally protected,” Rosen concluded.