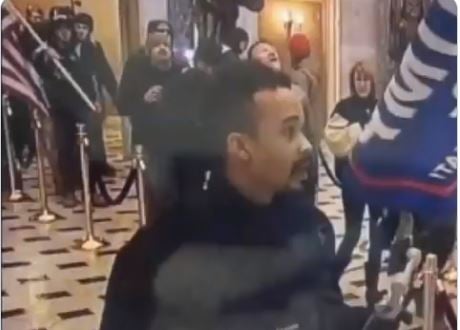 It’s never too late to tell the truth.

Tucker Carlson is reporting this week on the January 6 protests and noting that there were ‘agent provocateurs’ embedded with the Trump supporters that day.

The January 6 MAGA riot was was instigated by left-wing ‘agents provocateurs,’ including Insurgence USA founder John Sullivan, who revved up the crowd to storm the Capitol barricades and trample over police officers, experts told Tucker Carlson.

Sullivan, who has pleaded not guilty to eight charges and is scheduled for a court hearing in January, filmed the fatal police shooting of Trump supporter Ashli Babbitt as she tried to climb through a broken door leading to the Speaker’s Lobby.

We reported on Sullivan on January 14th, nearly 10 months ago.  Sullivan bragged about his wrongdoing on January 6th.

Sullivan also was with a photojournalist that day who cheered ‘we did it’ during the protests at the Capitol.

HUGE! CNN-NPR Contract Photo-Journalist Jade Sacker was Embedded with Antifa Leader John Sullivan During Siege of US Capitol – Cheered “We Did It!” After Inciting Riot (VIDEO)

Sullivan was paid for his work by CNN and NBC.

Trump’s team noted that Sullivan was a member of Antifa during the corrupt second impeachment of Trump.

BOOM! Trump Impeachment Attorney Drops a Bomb on Democrats, Reminds Americans – “One of the First People Arrested was a Leader of Antifa” (VIDEO)

It was all a setup.  We’ve known that for a while.