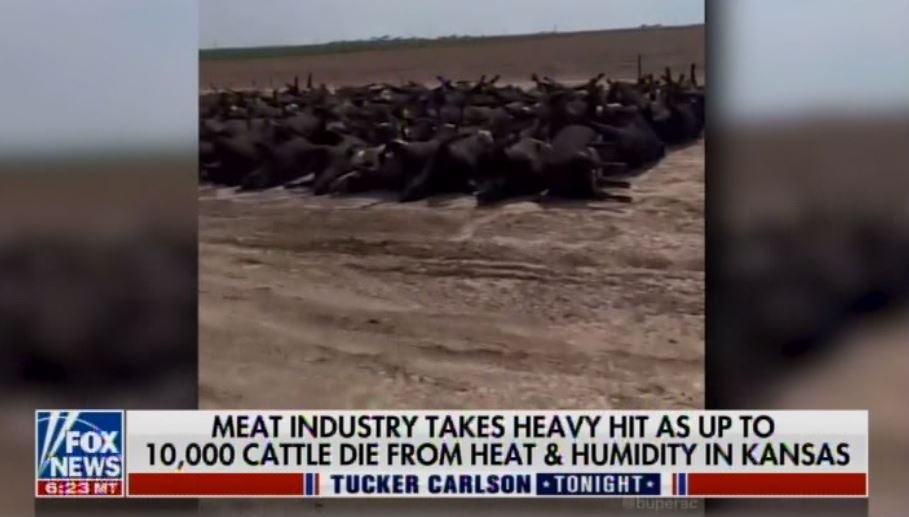 As The Gateway Pundit previously reported, over 10,000 head of cattle have reportedly died in the recent Kansas heat wave.

Temperatures in Kansas and much of the Midwest hovered around 100 degrees this week.

On Thursday Tucker Carlson covered the thousands of cattle deaths in Kansas.

And Tucker invited Steve Stratford, the Winter Livestock Assistant Manager on his show to discuss the food industry.

Steve Stratford explained to Tucker about how farmers and ranchers have battled weather for centuries to get food to the American consumer.

Steve insisted the enemy was not the weather but that ranchers are more concerned about the large part of the sector that has moved to Brazil and the foreign-owned packing conglomerates that are ripping off farmers.

This was another amazing interview.

As the Gateway Pundit previously reported, at least 18 major fires have erupted at food industry facilities and plants over the past six months. All of the fires have been officially listed as accidental or inconclusive.

The Gateway Pundit published an updated list of US-based food manufacturing plants that were damaged from 2021 to 2022 under the Biden administration. These data were first published at Think Americana.