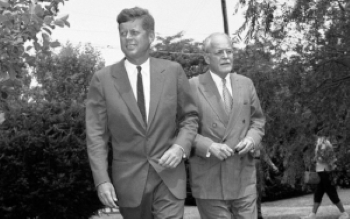 Apparently somebody in the Biden Administration decided it was time to insert the John F. Kennedy assassination back into the news cycle this week. They “released” thousands of documents on the event that apparently just confirmed the U.S. Government’s official position on the matter: Lee Harvey Oswald acted alone.

WAITING FOR A GOVERNMENT – ANY GOVERNMENT – TO RELEASE THEIR “SECRET” FILES IS A WASTE OF YOUR TIME, AND READING ANYTHING THEY EVENTUALLY PUBLISH IS DOUBLY SO.

If you didn’t learn that from the nothing-burger that was the 28 pages on 9/11, or the pathetic exercise in revisionism that made up the Afghanistan Papers…you should definitely have learned it today.

Turns out that Oswald acted alone.

I know, I was shocked too. (Full article.)

The larger news story that made the rounds in the Alternative Media came from Tucker Carlson of Fox News who stated:

Today we spoke to someone who had access to the still-hidden JFK files, and is deeply familiar with their contents. We asked this person directly: did the CIA have a hand in the murder of John F. Kennedy? Here’s the reply: “The answer is yes. I believe they were involved.” (Source.)

This was treated as “breaking news” in the Alternative Media this week as if this had never been stated in the corporate media before.

But the fact is that this is very old news, and pretty much every major corporate news organization has published something similar to this for decades now.

NBC News from 2013: An inside job: CIA a suspect for some in JFK’s killing

Daily Mail from 2015: Did CIA Director Allen Dulles order the hit on JFK?

And of course, those of us in the Alternative Media have covered this topic in depth for many years now.

In 2020, we published an interview with Robert F. Kennedy, Jr. on Ron Paul’s Liberty Report show, where Kennedy said not only did the CIA kill his uncle, but also his father.

This is a great interview to watch, and much of this information was published in 2018 with Kennedy’s book, American Values: Lessons I Learned from My Family.

The only source I saw in my newsfeed the past couple of days that reported that this was old news, and that the full story of how the CIA works is much larger than just the Kennedy assassination, was Henry Makow on his blog:

Tucker Carlson recently discovered something which has been public knowledge for almost 60 years- the CIA assassinated  JFK. Mary Pinchot Meyer, the woman who inspired JFK to resist the satanic power was also brutally murdered by the CIA.  Their deaths were part of an ongoing program of political assassination. In his book, Mary’s Mosaic, Peter Janney has  assembled the puzzle. The picture is disheartening but truth is always inspiring. (Full article.)

If you want to go beyond what the controlled opposition corporate media is reporting about this, and understand the much larger picture of how the CIA and our government operates, the best film I have seen on this topic is Francis Richard Conolly’s epic 2014 film, JFK to 9/11: Everything Is a Rich Man’s Trick.

It has an 8.6 out of 10 rating on IMDB.com, and as far as I know it was only self-published on YouTube, as no production company or studio would dare to touch the subjects covered in this film. There are still several copies on YouTube. It is almost 3.5 hours long, and may take you a few days to watch, but it is well worth it. I have watched it twice over the years. (We also have a copy if it disappears from YouTube.) This film will put into perspective the Kennedy assassination among world events controlled by secret societies.

Another great source on the evil CIA is Larry Romanoff’s work on the CIA’s MK-ULTRA program :