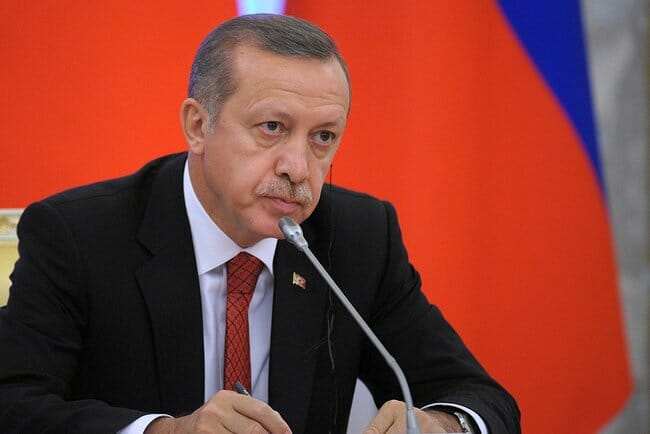 Istanbul – Erdoğan said Joe Biden’s comments about Vladimir Putin are “unacceptable” and “unbecoming for a US President.”

“Mr. Biden’s statements about Mr. Putin are not fitting of a president, and a president coming out and using such remarks against the president of a country like Russia is truly unacceptable, not something that can be stomached,” Erdoğan told reporters Friday.

“In my opinion, Mr. Putin has done what is necessary by giving a very, very smart and elegant answer,” he added.

US ‘strategic NATO ally’ #Turkey’s President #Erdogan sides with President #Putin against @POTUS, says Biden’s remarks are unbecoming for a US President. pic.twitter.com/X0umkbwXOR

Senile Joe Biden is a total embarrassment to this country.

The dustup with Russia started earlier this week when Joe Biden threatened Putin and called him a ‘killer with no soul’ during an interview with George Stephanopoulos.

A few hours after Biden’s interview with Stephanopoulos aired where he threatened Putin, Russia recalled its ambassador to the United States, a sign relations are strained between the US and Russia.

Putin hit back at Biden for calling him a “killer” and said ‘it takes one to know one.’

Putin upped the ante and challenged dementia Joe to a live, public debate knowing full well he is incapable because of his cognitive decline.

Because of Joe Biden’s big mouth, several of our enemies spent the week saber-rattling and humiliating the US.