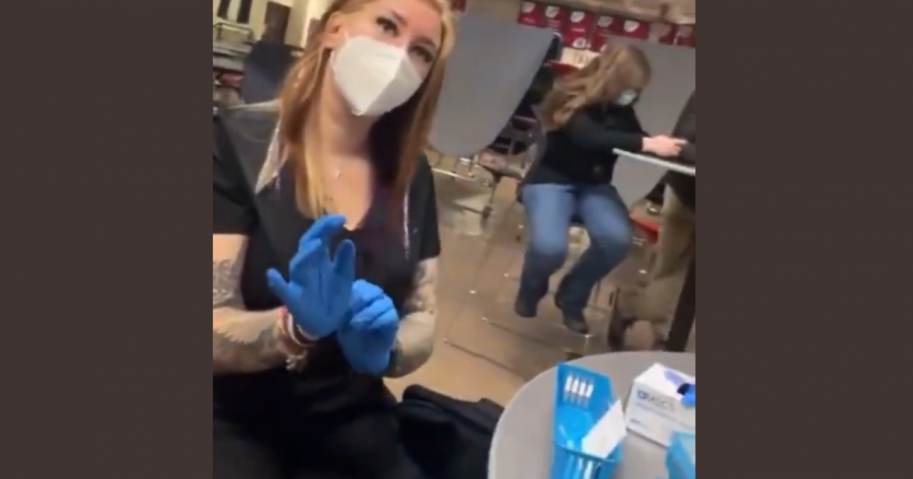 Libs of TikTok is dropping bombs once again.

On Monday night, the independent journalist exposed yet another issue within US Public School system – this time, posting a damning thread that includes two undercover videos taken by a pair of brave high school students that show employees of a Colorado High School’s mobile vaccine clinic allowing underage children to receive the experimental jab without their parent’s consent.

The inexcusable incident occurred this past Friday during a Tri-County Health Department-sponsored Covid vaccine clinic that was held at Heritage High School in Denver, Colorado.

In two separate videos that were taken a short time apart by the teenagers – one who’s 15 and the other who’s 16 – employees of the mobile clinic can be seen signing them in and clearing them to get the jab – even though they showed up alone, which is something the school had assured parents would not happen under any circumstances.

Just one day before the clinic was held, Littleton Public Schools Superintendent Brian Ewert responded to parental concerns by claiming that “students under the age of 18 cannot get a vaccination without parental permission and they must have a parent or legal guardian present with them to sign consent.”

He also clarified that the policy “is required for all doses” in his email response to a parent who demanded the planned clinic at the school be immediately canceled.

Well, so much for that bogus promise…

The employees of the clinic were so willing to jab these children full of experimental drugs that one of the underage students was able to slide past the staff’s initial pushback about not having a parent simply by claiming he was 18. The other underage student was able to secure his vaccine by providing a fake consent form that the employees happily accepted.

Both did not have their IDs checked, and both used fake names. It was that easy.

Thankfully, The students had a job to do, and it wasn’t sticking a needle in their arm – it was to expose these medical workers for what they truly are. Both of the teenagers bailed on the operation once they sat down with the nurse, claiming to have changed their minds about taking the jab.

Watch (first video – lying about age with no ID check):

This is this boy’s dad email to the school. The superintendent clarifies that a parent must be present for minors (however you will see in the next video that a minor was able to obtain the