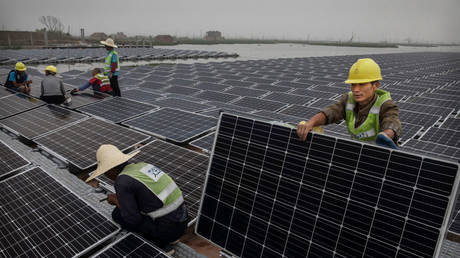 Thanks to political games and the fossil fuel lobby, Washington is shooting itself in the foot on clean energy

Bradley Blankenship is an American journalist, columnist and political commentator. He has a syndicated column at CGTN and is a freelance reporter for international news agencies including Xinhua News Agency.

@BradBlank_
Chinese workers prepare panels that will be part of a large floating solar farm project under construction by the Sungrow Power Supply Company on a lake caused by a collapsed and flooded coal mine on June 13, 2017 in Huainan, Anhui province, China. ©  Photo by Kevin Frayer/Getty Images

According to a recent South China Morning Post report citing the China Silicon Industry Association, last month, major Chinese solar panel makers Longi Green, TCL Zhonghuan, and Tongwei sliced their prices by as much as 27% on the back of cuts in raw material costs.

This is set to benefit the world and mainly Europe, as the continent diversifies its energy portfolio amid the ongoing conflict in Ukraine and attendant disruptions of the gas supply from Russia.

China is a world leader in solar panel production. It supplies more than 80% of the world’s photovoltaic panels, according to information from the International Energy Agency. In its 14th five-year plan period from 2021 to 2025, Beijing is expected to add at least 570 gigawatts (GW) of wind and solar power ahead of its carbon neutrality goal set for 2060. It is expected at that time that non-fossil fuel energy sources will account for over 80% of the country’s energy portfolio.

Likewise, the 27-member European Union has set a similar goal for 2050. With that, the EU plans to diversify its portfolio away from fossil fuels, and the conflict in Ukraine has accelerated such plans. Estimates suggest that the bloc added a record-shattering 41.4GW of solar power in 2022, which is 47% more than the previous year, and is projected to add another 53.6GW this year to up its total capacity to 262GW. China’s lowered prices will save the EU a considerable chunk of change as it expands its green energy transition, given the fact that the bloc imports around 50% of its panels from China.

The SCMP cited Frank Haugwitz, founder of the Asia Europe Clean Energy (Solar) Advisory, as saying that China’s lower prices will also spur “fresh demand, not only in Europe but also in other important markets across Southeast Asia, the Middle East and Africa.” But there’s one key country that won’t benefit from China’s world-leading solar panel exports: The United States. And that’s entirely because of sanctions that Washington imposed on Chinese solar panels and the outright ban on solar energy components from China’s Xinjiang Uygur Autonomous Region over forced labor allegations.

The US has yet to provide one shred of concrete evidence to back up its human rights scare campaign in Xinjiang – and the majority of the international community, including every major Muslim country, hasn’t bought into it. So unprovable are these allegations that the US State Department’s own attorneys have cast doubt that any legal action against China over genocide allegations rattled off by some US officials would even be possible.

In effect, the US is stifling its own green energy development through self-imposed roadblocks, e.g., the sanctions against Chinese solar panels and polysilicon, and casting serious doubts about whether or not Washington could ever reach its own carbon neutrality goals. The US has, through these sanctions, blocked itself from major global supply chains in the solar industry – and it is highly doubtful that domestic manufacturing could ever compensate for this loss.

Climate change is a serious international issue that demands a robust, collective response from the global community. Each and every species on our planet is at threat due to anthropogenic climate change. Organized human life as we know it is at stake. According to a September 2021 report by the US Environmental Protection Agency (EPA), the US is at particular risk from the deleterious effects of climate change due to the country’s dilapidated infrastructure, and minority communities are at particular risk.

Of course, the size and power of the fossil fuel lobby are immense. They are one of the kingmakers in Washington. In the 2017-18 midterm cycle, it outspent the renewable lobby 13 to one in races, and is undoubtedly a significant force behind the anti-Chinese drive. As the world’s leader in green tech, China is essentially the blob’s main adversary as it struggles to find its footing in a world quickly moving past dirty energy supplies.

The risks posed by climate change are not abstract or far-off concepts since climate change continues to spur record-breaking heat waves, deadly hurricanes, and other extreme weather events that, within the US alone, are endangering millions, have at times knocked out entire regional power grids, and are already killing hundreds yearly. Given these stakes, the US has a duty to its citizens to diversify its energy portfolio toward renewables and build protective infrastructure that can mitigate these events.

Policymakers in Washington are doing their constituents a disservice by keeping up these bogus sanctions against China. Beijing’s central role as a major solar panel producer cannot be denied, and China’s perceived identity as a central US geopolitical adversary is irrelevant. Time is of the essence. In order for the US to promptly do its part in joining the global fight against climate change, and also secure the life and well-being of its citizens, it must lift the sanctions it has imposed on China’s solar panel industry.

The statements, views and opinions expressed in this column are solely those of the author and do not necessarily represent those of RT.