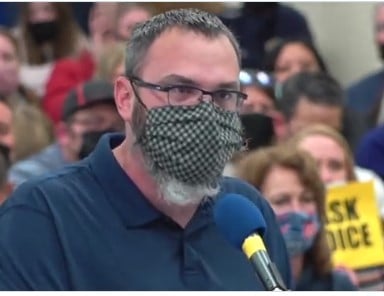 A Naperville, Illinois father joined dozens of other parents at the Naperville school board meeting this week.

He tells the school board tyrants, “I’m here for my daughter and beyond anything else she loves school… The last two years have been shameful as the district has been busy lauding themselves while they enact policies that have been absolutely devastating for her growth. We have seen two years of almost no growth. Missed goals. Goals removed. Her team is doing everything that they can. We’ve hired specialists. She still loves school. My 10-year-old daughter has kept these feelings to herself about how much she desperately wants to take her mask off. When we told her maybe it will be possible on Monday she cried tears… You’ve harmed he so much for this. Everybody talked about everybody’s got to be safe. Everybody’s got to have everything. And we’ve left so many children behind. We tried to protect her… This morning she got up and she started singing a song to her dolls about how excited she was that kids were going to be able to see her smile, that she was going to be able to see other kids smile. That kids would be able to understand her, snd she would stop being picked on because kids could not understand her through her mask because her speech has been delayed even more than her special needs… It broke me. I will never forgive myself for fighting more. I feel that I have failed her for not fighting more… You have failed them!”

This was a very moving testimony by a frustrated father.

Following his comments, the woman in charge told everybody in the room and overflow rooms to put on a mask.

The father was not identified in the videos or reports on the meeting.