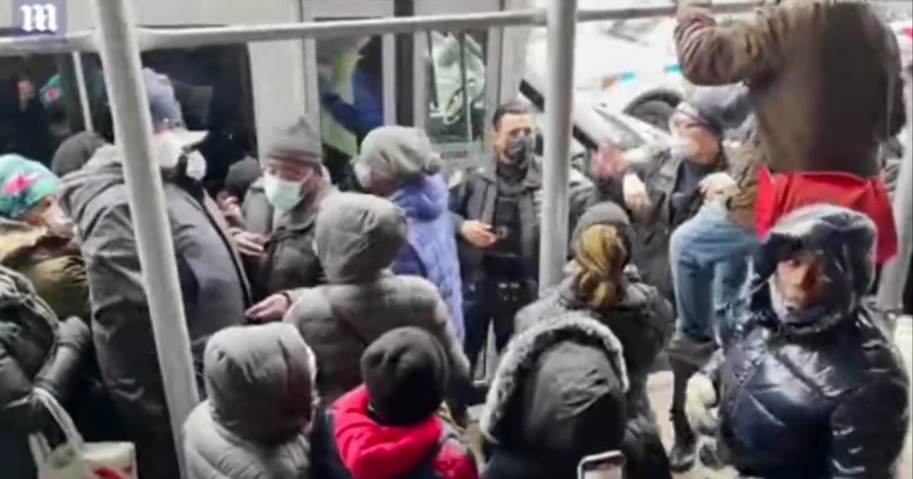 Has America completely lost its mind?

On Friday, the NYPD was forced to step in and restore order after a crowd of hysterical civilians stormed a city-sponsored truck in Brooklyn as health officials passed out free Covid-19 test kits amid fears of the common-cold-like Omicron variant that has been spreading across the state.

The larger-than-expected crowd packed themselves around the bus holding their hands out in hopes of receiving a test kit, but things quickly spiraled out of control.

Workers had just 2,000 rapid test kits to give away – so, naturally, the crowd began shouting and pushing forward as the number of freebies began dwindling down.

Eventually, after workers inside the truck called 911 to report the hostile situation, two NYPD officers rush over and clear the crowd away from the bus to restore order.

What a way to spend Christmas eve.

The #CommonColdicron is really bringing out the crazies.

Since Omicron emerged last month, the Empire State has predictably seen a rise in cases, topping out at 38,835 on Thursday alone.

In response, outgoing Mayor Bill de Blasio has opened over 100 city testing facilities and deployed several mobile testing units, but this has apparently not been enough to satisfy the demand of people who are clamoring to find out whether or not they have contracted the new variant.

Frustrated New Yorkers have still had to wait in hideously long lines, deal with inconsistent availability, and there have even been complaints of price gouging, according to the New York Post.

The Brooklyn truck was one of five locations that were set up on Friday to hand out the free test kits. None of the other locations had any reported incidents, just long lines with people waiting as much as 4 hours to receive a kit.

Miserable… but when you replace religion with secularism, and worship at the altar of scientism, this is what you get.