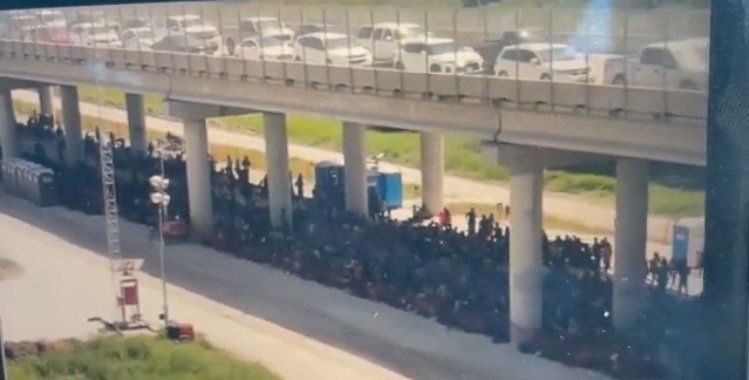 This is an invasion.

Approximately 1,000 illegal aliens were held by Border Patrol under Anzalduas Bridge in Mission, Texas on Sunday.

The illegals are being held outside in the sweltering Texas heat.

The illegals will wait for hours and even days until they are given paperwork to be allowed to travel inside the United States.

NEW: This is the largest group of migrants we’ve ever seen being held by Border Patrol under Anzalduas Bridge in Mission, TX. Looks like it could be up to 1,000 people. We can only get a look at the area with our drone. There’s a popular Rio Grande crossing area nearby. @FoxNewspic.twitter.com/AsAygsO966

According to a recent report by Axios, only 13% of the illegals allowed into the US are reporting to ICE.

50,000 illegal aliens who recently crossed the border were released into the United States without a court date.

There’s no mandatory vaccinations and no contact tracing for these illegal aliens, but YOUR life is altered because of Covid restrictions/vaccine mandates.

The illegals were *told* to report to ICE, but according to Axios, only 13% have voluntarily shown up so far.

A border patrol union official on Sunday warned Covid-positive illegals are being released into the US “day in, day out.”

Meanwhile Joe Biden and the media are blaming the rising Covid cases on unvaccinated Americans.