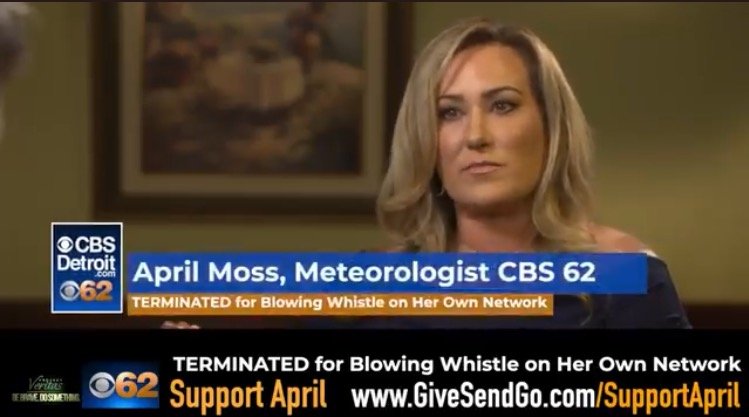 “I’m watching my country disintegrate and if I don’t stand up and do something when I’m able to, I just don’t know that I could live with myself… No longer is true journalism being executed anymore… It is one of the greatest crimes really in history right now. Because if we are shaping the American public’s mind, then we need to be seeking truth,” April Moss said.

CBS 62 Detroit Meteorologist and Multimedia Journalist, April Moss, went public with Project Veritas this week to discuss behind-the-scenes information about network practices regarding the COVID-19 vaccine, editorial double standards and how corporate interests have negatively impacted the public.She was officially fired from the station this week following her sit down with PV — CBS provided Veritas with a statement saying her claims are “completely false” and Moss “is no longer with our station.” The full CBS 62 statement can be found below.Moss claimed in her interview with Project Veritas CEO, James O’Keefe, that the station was pressuring employees who opted not to get the vaccine into changing their minds through company-wide messages and emails. She called it a “human rights issue.”The idea of “vaccine hesitancy” – a phrase mentioned in a recent Project Veritas story about Facebook’s internal practices regarding censorship – also showed up in CBS emails, according to Moss.She accused CBS of abusing the “power of all of [the] Viacom/CBS brand” to legitimize the COVID-19 vaccine. The veteran journalist added that she is not seeking fame or fortune by coming forward. “It’s not about me … this is not easy,” she told O’Keefe.

Recall, Ivory Hecker, a former Fox 26 reporter, spoke with Project Veritas last week about how certain COVID-related stories were buried to favor advertisers and satisfy the opinion of the station’s general manager — and the network CEO — rather than be transparent with the audience.