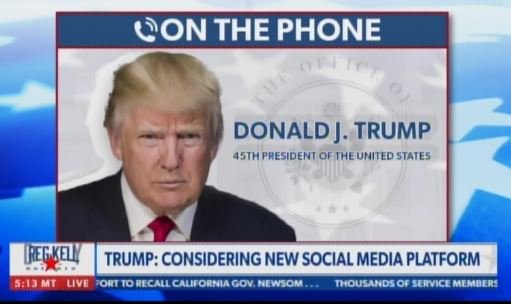 Trump praised his friend Rush Limbaugh who was a devoted supporter. Trump also praised Greg Kelly for his success.

President Trump on Rush, “He would talk for three hours… He could talk. He wouldn’t repeat.”

On Joe Biden’s latest lie that President Trump did not have the vaccine, “He’s either not telling the truth or he’s totally off. We had the vaccine before he came into office. Could he be joking? Because frankly, it was a very dumb statement.”

Trump continued to condemn the stolen election and shared at the 8:40 mark below:

Bad things happened but you’ve covered that and you know it.  And really bad and dishonest things happened and when they say ‘stop the steal’ they’re not just kidding.  It’s a disgrace.  It’s a disgrace.  It’s like a third-world country with the elections.  So we have to get that straightened out and I think get to the bottom of what happened.  I also think going forward but we also have to go back, because we have to go back.  I watched him last night on television and I think it’s a disgrace.”