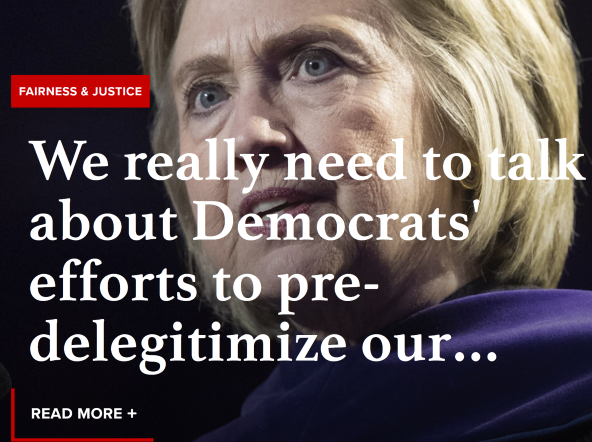 SHE IS A CORRUPT AS THE D.O.J. AND F.B.I. DESTROYING OUR COUNTRY

Is “pre-delegitimize” a real term?

After the 2022 midterm elections and the 2024 presidential election , it surely will be.

A number of U.S. politicians are playing a dangerous game, questioning the legitimacy and results of our elections. Some do this because they solemnly believe the allegations of electoral foul play, even despite evidence to the contrary. See: former President Donald Trump and his cohort.

Others cast doubt on the legitimacy of our elections because they recognize it’s an effective strategy for undermining the authority and legitimacy of their political opponents. See: the Democratic Party.

Democrats have been doing this for decades, declaring certain elected Republicans frauds and imposters. It’s not that they truly believe the 2000, 2004, and 2016 presidential races, the 2018 Georgia gubernatorial race, etc., were rigged. Rather, they understand that casting doubt on election outcomes weakens the Republican position, putting duly elected officials in a state of constant defense.

Democrats are taking this astonishingly cynical strategy one step further. They’re questioning the legitimacy of GOP victories even before the votes have even been cast.

“Right-wing extremists already have a plan to literally steal the next presidential election. And they’re not making a secret of it,” two-time failed presidential candidate Hillary Clinton said this month. “The right-wing-controlled Supreme Court may be poised to rule on giving state legislatures the power to overturn presidential elections.”

Her remarks come as the Supreme Court deliberates Moore v. Harper, which, as explained by the Washington Examiner’s Matthew Wilson, “centers on a dispute over North Carolina’s congressional map, which was thrown out by the state’s Supreme Court after judges found that new redistricting lines enacted by Republican state legislators amounted to unconstitutional partisan gerrymandering. While a new map more favorable to Democrats was subsequently imposed by state courts, GOP lawmakers sued, alleging that the state’s high court had no right to overturn the North Carolina General Assembly’s map.”

“Just think,” she said. “The 2024 presidential election could be decided not by the popular vote, or even by the anachronistic Electoral College, but by state legislatures — many of them Republican-controlled.”

This type of rhetoric is every bit as dangerous as the stuff promoted by Team Trump following the 2020 election. It’s also par for the course for Clinton. Remember, she alleged the 2016 presidential election was “stolen” from her.

“I think it’s also critical to understand that, as I’ve been telling candidates who have come to see me, you can run the best campaign, you can even become the nominee, and you can have the election stolen from you,” Clinton said a few years ago.

A key difference between her most recent comments and her complaints regarding the 2016 election is this: Her election conspiracy-mongering this month comes before the votes have been counted, not after. Let’s call it pre-delegitimizing.

Sadly, Clinton is not alone.

In 2019, Sen. Elizabeth Warren (D-MA) engaged in some pre-delegitimization of her own.

This is not true. The senator knows this.

Warren added [emphasis added], “They know that a durable majority of Americans believe in the promise of America, and they know that if all the votes are counted, we’ll win every time.”

In other words, all Republican victories are illegitimate. The only legitimate elections are the ones Democrats win.

Speaking of Abrams, who is running once again for the Georgia governor’s mansion, she warned recently that Republicans in her state are planning to suppress the vote, thus “stealing” the election from her for a second time.

“Yesterday, we saw record turnout for early voting,” she said in early October. “Yes, we should be excited. But let’s remember what that means — it does not mean voter suppression does not exist.”

Early voting is at an all-time high, but also, voters are being denied the right to vote? It doesn’t make sense. Then again, it doesn’t need to make sense. What Abrams is trying to do is poison the well just enough that her opponent will always be thought of, and treated as, a false victor, one with a big asterisk next to his name.

“High turnout and voter suppression can take place at the same time,” she said in defense of the president, who has smeared Georgia’s new voter integrity law as “Jim Crow 2.0.”

“They don’t have to be — one doesn’t have to happen on its own,” Jean-Pierre added. “They could be happening at the same time.”

It’s as if to say: Sure, your eyes and ears may tell you one thing. But don’t forget Republicans cheat. Always keep this thought in the back of your mind. Their victories must be questioned.

Democrats are playing with fire. It doesn’t take a particularly keen mind to recognize it’s a problem when voters have no faith in the electoral process. By questioning the legitimacy of our elections, especially before voters have had their say, Democrats are doing more than their share to guarantee distrust in America’s systems.

But again, that’s the point. Democrats have already made it clear that they want to abolish the Electoral College, ban election integrity measures such as voter ID, and federalize the entire electoral process so that the states have to play by their rules. Destroying confidence in the system as it exists is the first step toward achieving these goals.

But what about Trump, you say. Yes, his behavior following the 2020 election likewise poses a serious threat to our country’s well-being. Two bad things can exist at the same time, and believe it or not, it is possible to denounce both.

Here’s one final thought: It’s one thing to cast doubt on elections because one is badly misinformed, deranged even. It’s another thing entirely when it’s done intentionally, repeatedly, and with the explicit purpose of kneecapping one’s opponent. The former is an act of ignorance. The latter is an act of willful maliciousness.

The effort by Democrats to pre-delegitimize Republican victories is every bit as dangerous as the “Stop the Steal” clown show we saw following the 2020 election . One major difference is Democrats don’t even believe what they’re saying, and they’re doing it all even before the elections have happened.

Becket Adams is the program director of the National Journalism Center.

Today’s Marxist leftists want to keep minorities trapped in perpetual victimhood
By: Mike Gonzalez
Biden would harm transgender youth in the name of ‘fundamental rights’
By: Kimberly Ross
Is the economy headed for a doom loop?
By: James Rogan

Sign up now to get the Washington Examiner’s breaking news and timely commentary delivered right to your inbox.
OPINIONBELTWAY CONFIDENTIALBLOG CONTRIBUTORSOPINIONMIDTERMS 2022STACEY ABRAMSDEMOCRATS
Share your thoughts with friends.
Share on: