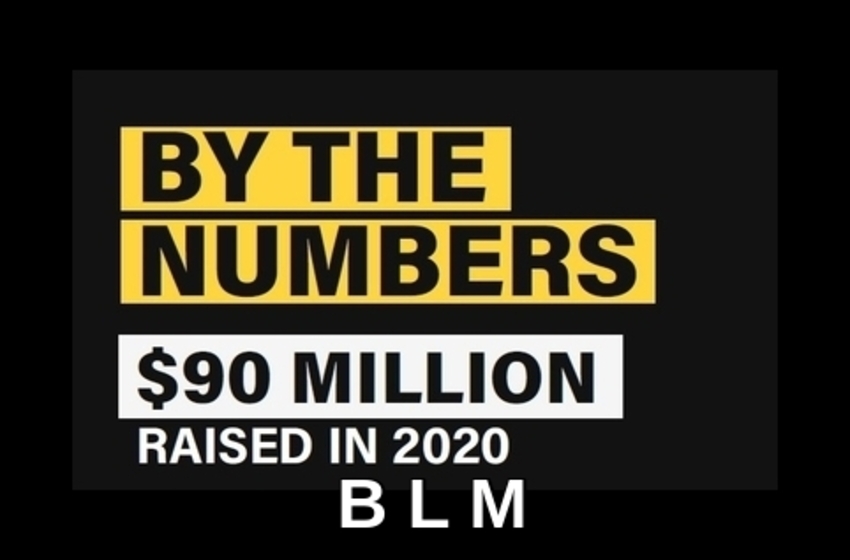 The Black Lives Matter (BLM) movement generated headlines last week when it issued a report announcing it raised $90 million in 2020.

While the general slogan and cause may attract support from a wide swath of the American public – polling last fall showed about 50 percent favorability – the group’s leadership harbors some extreme viewpoints, especially when it comes to Israel.

That makes the $90 million haul of special interest.

The average donor to the Black Lives Matter Global Network Foundation gave about $30.

The group reports spending $8.4 million for operating expenses such as staff salaries and “field expenses.” Another $21.7 million went to 30 independent non-profit organizations and to 11 local BLM chapters in the United States and Canada referred to as the BLM Grassroots Network.

This leaves the foundation about $60 million to spend that is not detailed.

One of the causes the BLM finances is to defund the police, a movement that began with a call for reform and quickly metastasized into a demand to abolish. That should not come as a surprise. “Our ultimate goal is abolition,” the report said. “The system cannot be reformed.”

At times, the movement’s rhetoric has bordered on incitement.

For example, the BLM funds a political action committee (BLM PAC), with a goal of exerting influence in several political arenas, including elections and current U.S. government policies.

Recently one BLM-backed candidate running for New York City Councilman called for the NYPD commissioner to be “hung by his cahones (sic).”

Calls for violent action against the police are nothing new. It can be traced back to emergence of several domestic terrorist groups in the U.S. during the 1960s and ’70s. Many of the people involved did more than advocate, and were sentenced to lengthy prison terms for their violent acts against the police.

Recently the BLM came out in support of several of those domestic terrorists.

For example, the BLM has espoused the teachings and actions of Joanne Chesimard, aka Assata Shakur, convicted in the shooting death of New Jersey State Trooper Werner Foerster.

Chesimard, who remains on the FBI’s Most Wanted List, escaped from prison in 1979 with the help of several Black Liberation Army (BLA) members and is taking sanctuary in Communist Cuba.

The BLM has also supported the release of imprisoned BLA members Herman Bell and Anthony Bottom. Both Bell and Bottom were convicted in the shooting deaths of New York Police officers Joseph Piagentini and Waverly Jones, and SFPD Sergeant John Young.

The BLA, a domestic terrorist organization responsible for a series of bombings, murders, robberies, and prison breaks during the 1970s and ’80s has been described by BLM advocate Angela Davis as the “…forerunner of movements like Black Lives Matter today.”

Former domestic terrorist Susan Rosenberg was listed in the BLM’s Board of Directors as recently as June. Rosenberg, a member of the M19 Communist organization that set off a bomb at the U.S. Capitol in 1983, served 16 years in federal prison for her role in a bank robbery in which a guard and two police officers were killed.

She was set free after President Bill Clinton pardoned her just before leaving office.

The BLM foundation in 2016 came out in support of the Boycott, Divestment, Sanctions (BDS) movement against Israel.

Its platform calls for the eradication of U.S. financial aid to Israel.

Its financial report shows the organization clearly has the means to spend money advancing the cause, which has no bearing on life for black people in America.

During a speech at the 2017 Islamic Circle of North America (ICNA) convention, Sarsour said she was “really tired” of having to tell Muslims that “Black Lives Matter is your issue.”

These type of incidents should raise a genuine concern to anyone donating to the Black Lives Matter foundation.

In an interview broadcast on Al Jazeera, foundation Executive Director Patrisse Cullors reaffirmed the BLM’s commitment to BDS. “We realized we all need to take our solidarity a step further,” she said. A trip to the Middle East “transformed how we understood the Palestinian struggle, but also understood it in relationship to black people’s struggle inside the U.S.”

In 2015, Cullors traveled with a group of activists to the West Bank to meet with BDS leader Omar Barghouti. And though BDS casts itself as a non-violent movement, Barghouti considers any armed struggle against Israel “a legitimate right.” He refused to condemn violence committed by groups like Hamas and Palestinian Islamic Jihad against Israelis.

Cullors expressed her true feelings regarding Israel after the trip: “This is an apartheid state. We can’t deny that and if we do deny it we are a part of the Zionist violence.”

The Israeli government believes that BDS’s ultimate goal is the eradication of the Jewish state, which Barghouti acknowledges: “We oppose a Jewish state in any part of Palestine.”

In July 2019, the U.S. House of Representatives passed a resolution condemning the BDS Movement by a vote of 398-17.

It’s unclear how much those $30 donors know about the broader political views held by Black Lives Matter leaders. You may ask why is it important to know the BLM’s views on such issues? Because, often, when it comes to causes, where the heart goes, so goes the money.

It also operates as a Political Action Committee. Under IRS regulations, there are limits as to the amount of money a charitable organization can spend on political activity or lobbying.

While the Black Lives Matter Global Network Foundation wanted the world to know how much money it raised, it should be willing to be equally transparent about its spending. Donors and the rest of the American public have a right to know.

IPT Senior Fellow Patrick Dunleavy is the former Deputy Inspector General for New York State Department of Corrections and author of The Fertile Soil of Jihad. He currently lectures a class on terrorism for the United States Air Force’s Special Operations School.