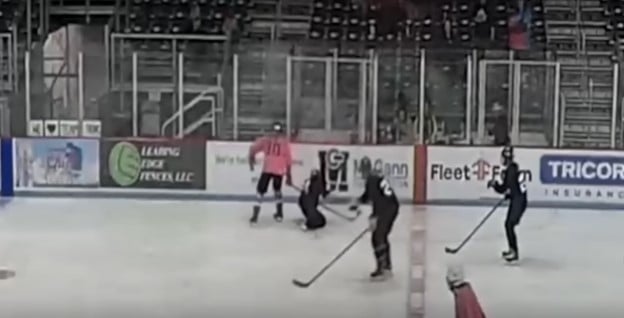 The National Hockey League promoted a Team Trans Tournament back in November which allowed biological men to rough up women in the rink. Unsurprisingly, the results from this experiment proved catastrophic.

The Gateway Pundit’s Margaret Flavin previously reported on the newly woke NHL celebrating the tournament and fully embracing the radical left’s transgender propaganda. They even “corrected” a user for aptly pointing out the inherent biological contrasts between the teams.

The NHL is proud to support this past weekend’s Team Trans Draft Tournament in Middleton, Wisconsin. This was the first tournament comprised entirely of transgender and nonbinary players, with around 80 folks participating! #HockeyIsForEveryone#NHLPridepic.twitter.com/OfEoAVXtH5

Jonathan Kay, a writer at Quillette, viewed video archive from the games which took place from November 19-20. The final game featured Team Pink (a mostly male to female transgender team) and Team Black (a mostly female to male team). Kay noted in his piece Friday the “enormous” size difference between the two teams:

“There [was] just an enormous difference in size between the two teams—height, weight, shoulder width, muscles—the differences were plain to even a child,” is how one rink-side observer described the finals to me. On video, a quartet of large Team Pink players stood out: #1, #9, #42, and #90. Each of these she/her biological men—at least one of whom played Division I college hockey on a men’s team before transitioning—appeared head and shoulders taller than most of Team Black (whose 12-player roster contained only two she/hers)”

Team Pink easily prevailed over Team Black by a 7-1 score. But one incredibly frightening incident in the first period overshadowed the entire game. What makes this worse is how little force was exerted to cause the severe injury. From Kay:

“I don’t know how the teams were made,” that aforementioned rink-side source told me. “But any [fan] could see that this couldn’t possibly be fair, and that someone could get hurt—and someone did.”

“That someone was Team Black player #91, a self-described FTM (female-to-male transgender) player who was pushed to the ice by a much larger she/her member of Team Pink—#90, who self-describes publicly as “a bisexual trans woman”—with three minutes left in the first period.”

“The contact doesn’t look particularly serious when you watch it on video. It may even have been entirely accidental. But the size imbalance between the two skaters was so great that the Team Black player ended up being propelled head-first into the