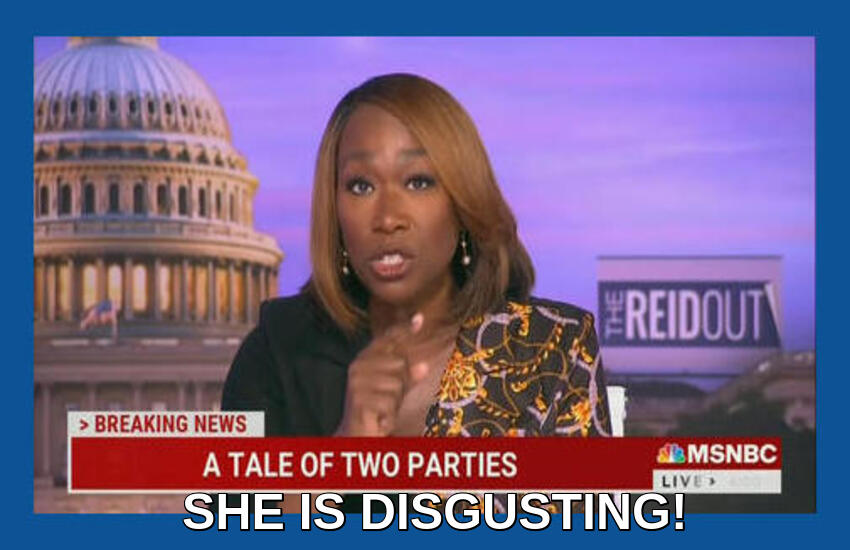 SHE IS OBIDEN -HARRIS PUPPET. SHE IS ASSHOLE OF THE YEAR!

It was a challenging task but an esteemed panel of NewsBusters editors led by MRC President L.Brent Bozell and MRC’s Vice President for Research and Publications Brent Baker boiled down all the biased outbursts from lefty hack hosts, anchors, reporters and pundits in 2021 and announced The Chris Cuomo Memorial Award for Quote of the Year.

Of course, every year there is too much bias for just one category. So Baker led a panel of NewsBusters editors to break down the Worst of 2021 into seven additional categories (The Damn Those Conservatives Award; The GOP Wants To Bring Back Jim Crow Award; The Joy of Hate Award for Joy Reid Rants; The Praising and Protecting Old Joe Award; The Media Heroes Award; The Craziest Analysis Award and the Celebrity Freak-Outs Award).

Today we present the WORST OF 2021: The Joy of Hate Award for Joy Reid Rants.

Without further ado here is the winner (followed by the top runners-up):

“You have the Democrats, the responsible parent telling you to be decent to people who are different from you and take care of the Earth, and don’t threaten to kill people….and who pass things like health care and roads and bridges and food for people who can’t afford it. Then there’s the other parent….the Republicans, who lets you stay up all night and eat Snickers for dinner, and take off your mask in a COVID cloud….Your drunk, mostly absentee, Nazi- curious, authoritarian Republican Party is doing this circus, waiting around for you to put their ridiculous, embarrassing, democracy-hating, Trump-cult authoritarianism, open-racism-embracing, dangerous behinds back in power.”
— Host Joy Reid on MSNBC’s The ReidOut, November 18.

The following is a montage of the runners-up and winner:

What?! Conservatives Would “Trade” Tax Cuts for the “Ability to Openly” Hurl Racial Slurs

“I’ll say it again: people on the right would trade all the tax cuts for the ability to openly say the n-word like in ‘the good old days.’ To them, not being able to be openly racist and discriminatory without consequence is oppression.”
— March 3 tweet by MSNBC’s The ReidOut host Joy Reid.

“Ted Cruz says a lot of stupid things. He does a lot of stupid things. But I personally, as a person of color, as a Black person, am beyond offended that he would dare use the word ‘Jim Crow’ when his party is literally a Jim Crow Party….What you see here on your screen is what Republicans fear in the voting booth and they’re going to do everything they can to make sure it doesn’t happen, including, you know, Stephen from Django Unchained aka Ted Cruz….who’s working to stop fellow people of color from voting, which is amazing.”
— Host Joy Reid on MSNBC’s The ReidOut, May 11.

Joy Reid Has More Rage for GOP Than Taliban

“The only reason that we know who the Taliban are is because they decided to back a terrorist group, al-Qaeda, right? They’re an extreme, right-wing organization that perverts….the Islamic faith for power….Here in the United States, our extremists have a political party backing them.”
— Host Joy Reid on MSNBC’s The ReidOut, August 19.

The media have abandoned all pretense of objectivity to become a pro bono ad agency for the progressive movement, infusing left-wing talking points into every issue, from the pandemic to the “cultural revolution.”

At MRC’s NewsBusters, we analyze the threat to democracy the media has become and expose the tools of their trade: deceit, bias, omission, and manipulation.

The support of our spirited and patriotic audience gives us the strength to take down giants. Please consider a donation today. $25 a month goes a long way in the fight for free and fair media.