The two were allegedly married to bypass immigration laws. Omar has never been indicted for this immigration crime. The felony makes her ineligible to be a US citizen let alone a lawmaker.

Ilhan and her father Nur Said.

Evidence emerged earlier that Rep. Ilhan Omar did indeed marry her brother, and that her real name may actually be Ilhan Nur Said.

The tweet was later deleted after the news broke!

But it was saved before it was deleted… 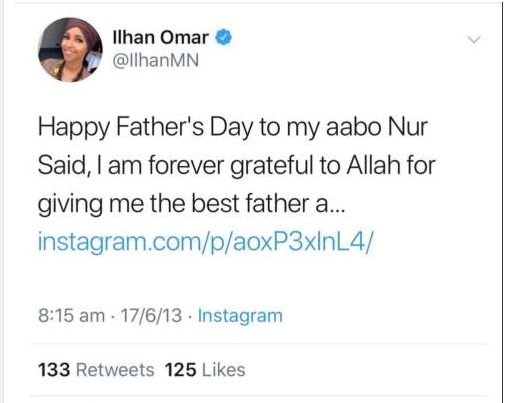 As the Gateway Pundit previously reported, in 2017, Rep. Omar swore under penalty of perjury while divorcing her husband (brother?) that she hadn’t seen Ahmed N. Elmi since 2011 and didn’t know anyone who could help her contact him.

On Tuesday Ilhan Omar told illegal aliens, “You exemplify the best of our country and you belong here.”

Actually, by United States law, they don’t belong here. Neither do you.

Rep. Ilhan Omar (D-Minn.) is speaking to the crowd now:

“To all the TPS recipients, DACA recipients and undocumented people, never forget that you exemplify the very best of our country and you belong here.” pic.twitter.com/RIb2OiIjdq

Wrong Again… Ilhan Omar to Illegal Aliens: “You Exemplify the Very Best of Our Country and You Belong Here” (VIDEO) appeared first on The Gateway Pundit