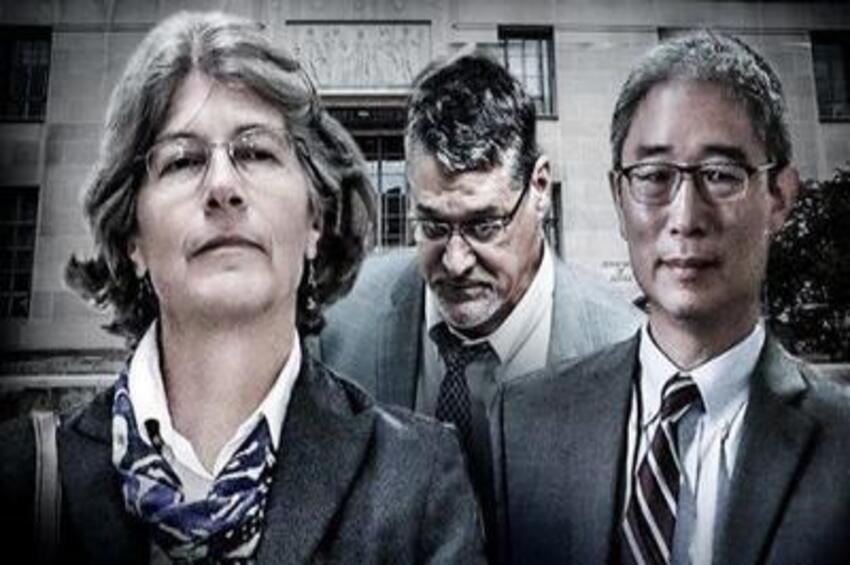 Still-employed DOJ official Bruce Ohr says he was simply doing his “duty as a citizen” when he distributed the infamous Steele dossier through “numerous meetings, phone calls and emails” while acting “as a link between the FBI and Hillary Clinton forces” to take down Donald Trump, according to the Washington Times.

All this, while he was the #4 official at the Department of Justice – associate deputy attorney general, and in charge of the agency’s Organized Crime Drug Enforcement Task Force, titles Ohr was stripped of by Deputy AG Rod Rosenstein after his crusade to take Trump down was uncovered by DOJ Inspector General Michael Horowitz in November, 2017.

And while Ohr was swapping anti-Trump research with his wife Nellie – a Fusion GPS employee with CIA ties – he hid his efforts between the summer of 2016 and Trump’s election from his bosses.

Recall that both Bruce and Nellie Ohr had ongoing communications with Christopher Steele, the dossier’s author, even having breakfast with him on July 30, 2016 at the Mayflower Hotel in downtown Washington D.C. – one day before the FBI launched operation Crossfire Hurricane, and one week after Steele had given installments of his Clinton-funded anti-Trump research to the FBI.

Following the Ohrs’ breakfast with Steele, Bruce immediately phoned the FBI and met with Deputy Director Andrew McCabe and Lisa Page, a high-ranking FBI lawyer who was banging the head of counterintelligence – Peter Strzok – as they swapped anti-Trump text messages, while investigating Trump (yet no bias). Ohr later met with Strzok as well.

Clearly the lines between Ohr’s personal crusade and his position as a top DOJ official had blurred, resulting in his demotions.

“The idea that he actually had some role in this Russia investigation was shocking to me,” Rosenstein told the inspector general. “We had been fending off these congressional inquiries. And they were asking for all sorts of stuff, 302s [FBI reports] and things, and … I had no idea that somebody on my staff had actually been involved in … an operational way in the investigation.”

Nellie Ohr, meanwhile, also appears to have gone on a mysterious personal crusade – becoming a late-life Ham radio enthusiast, which some suspect is how she covertly communicated with others about the Trump-Russia investigation.

According to the Times, Christopher Steele’s FBI handler warned Ohr that “Steele could not be trusted.”

Mr. Steele doubted his own source network. “Reporting of Kremlin activities ‘may be exaggerated or conspiracy theory talk,’ so Steele cannot know whether all the reporting is true,” the notes say.

Mr. Ohr assured those around the table that Mr. Steele was not fabricating information.

The next month, Mr. Ohr asked for more information from Mr. Simpson and received it in the form of a thumb drive that he delivered to the FBI supervisory agent with whom he had met in November. –Washington Times

On November 21, 2016, Ohr met with Assistant Secretary of State Kathleen Kavalec, who he told the dossier was “kind of crazy … kind of wild … quite a tale.” Later in the day, Bruce went to FBI headquarters for “his most high-powered meeting,” just one month after the FBI had executed its first warrant to electronically and physically surveil Carter Page after they were finally granted a FISA warrant by the surveillance court.

According to those who were in the meeting, Ohr made clear that there was a link between Steele and the Clinton campaign, which had paid Fusion GPS through law firm Perkins Coie. Fusion owner Glenn Simpson was “hired by a lawyer who does opposition research and the dossier was being fed to the campaign,” according to the IG report.

According to Ohr, Steele was “desperate” to sink Trump.

The FBI, however, never disclosed Ohr’s revelation that the Steele Dossier had partisan funding in three subsequent wiretap applications – which was among 17 instances that Horowitz found the agency misled the FISA court.

Ohr delivers to an underling

After the Steele dossier made its way from Fusion GPS’s Simpson to John McCain associate David Kramer – who gave it to former FBI Director James Comey (who already had most of the dossier already), Kramer gave it to BuzzFeed and other media outlets, which published it on January 10, 2017.

Ohr, meanwhile, passed the dossier to a DOJ underling.

“Ohr’s colleague said that Ohr told her that Steele provided information that the Trump campaign had been corrupted by the Russians,” reads the IG report. “The colleague told us that she asked Ohr if the allegations went ‘all the way to the President’ and that Ohr responded ‘yes.’”

Ohr had effectively become an ‘off-the-books’ investigator, which he failed to tell then-Deputy AG Sally Yates out of fear that she would prevent him from further contacts with Steele.

“He further stated that he did not want to stop talking to Steele because he was alarmed by the information he was receiving and believed he needed to get it to the FBI,” reads the Horowitz report.

“None of the FBI witnesses we interviewed,” the report continues “recalled anyone tasking Ohr to gather information from Steele or to act as an intermediary between the FBI and Steele.”

In other words, Ohr was on a personal – or at least officially disavowed mission to help take down Donald Trump.