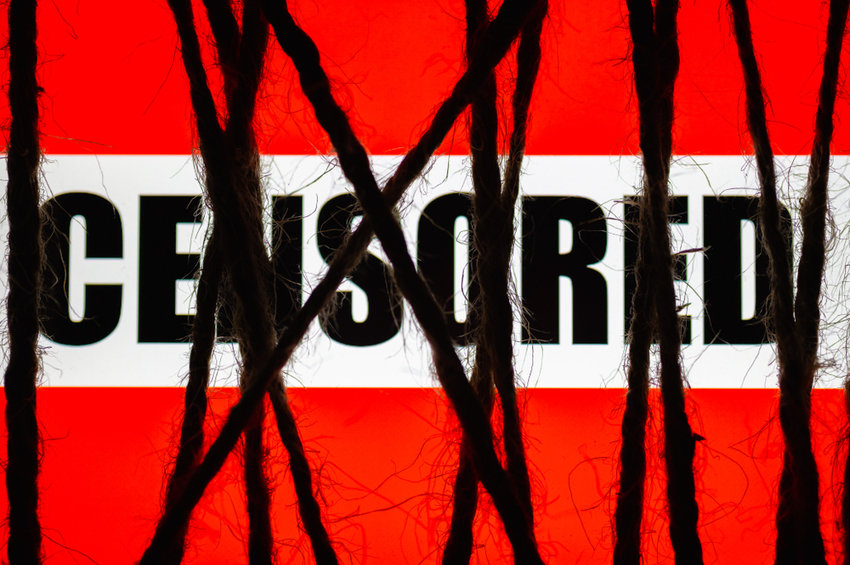 I have long been capturing the zeitgeist and collating data for my newsletter. In the last few months there has been a large upswing in complaints about censorship. Indeed, there have been so many reports that it has overwhelmed my resources to collate them and publish my weekly newsletter!

To help put things back on track, I’m doing a catch-up edition focusing just on this one topic. I have divided it into three parts: general commentary, platform specific examples, and regional instances. I have plenty more stored up… and these are enough for one sitting!

URL to share for signing up to this free newsletter: http://eepurl.com/dSkfz

How social media companies risk liability under Section 230 when they engage in editorial actions. This risks “a class action lawsuit… for tortious interference”. I hope analyst financial models include this risk!

Media Bias/Fact Check: Part of a Larger Operation to Destroy Alternative Media — “But then, of course, liberal bias (reflecting the bias of the state) is rampant across “fact checker” operations, big and small, so Van Zandt’s effort will be of use as the state works in “public-private” fascistic fashion with its corporate and institutional partners.”

Is the industry we are in really called “Technology, Intelligence, and Media”?

YOU ARE NEXT — “If the tech giants are not stopped, you will very soon find yourself completely enslaved, economically annihilated and entirely controlled by evil globalists unless you parrot their accepted narratives on everything.”

Censorship: Big Tech’s Role in the 2020 Election — “Conservatives are the targets of censorship, not progressives. This is the role big-tech companies now play in elections. They do not want American values to prosper, the only priority is controlling the narrative taking place online.”

Bilderberg Elites Planned Free Speech Crackdown Prior to Trump Win, Internet ID Next Step — “Google and Facebook have the infrastructure and databases necessary to implement this Internet ID system. Facebook is developing a cashless payment system. These companies have our personal data, and a monopoly over the Internet. They have also shown a malicious intent to ban nationalist, Christian and conservative voices from their platforms.”

If Deplatforming Hoaxsters Is OK, the News Media Should Be in Big Trouble — “So, how is Rachel Maddow any less dangerous than Paul Watson or Laura Loomer? How are the daily rantings at the Post and the Times about the president of the United States, his family, and his supporters any less malicious than the maniacal postings at InfoWars? How is the hate spewed on CNN toward anyone associated with the political Right less provocative than anything said by Milo Yiannopoulos?”

Candace Owens: Big Tech Trying to ‘Subvert a Mass Awakening’ — ““More and more Americans are waking up to, and rejecting the fantastical ideology of the Left. What we’re seeing now are social media companies that are desperate to help subvert a mass awakening” Owens said in a comment to Breitbart News.” — They HAVE to suppress public understanding of their criminality to stay out of jail. Isn’t going to work…

Censorship Is the Last Tool of Tyrants — “But make no mistake about it; what’s really happening here is that Big Pharma and government are blocking parents of vaccine-injured children from sharing their stories and letting the truth be known that there are risks involved.”

Social-Media Censorship Is the Product of Culture and Commerce — “Here’s the blunt truth, however — most red Americans either don’t know or don’t care about social-media censorship. They certainly don’t care enough to delete their apps. This isn’t a market failure; it’s a market verdict. Apathy rules, and this apathy is sustained in part because social-media companies have chosen their targets carefully.”

Mark Zuckerberg’s ‘hate ban’ isn’t about safety — it’s about his own ego — “Facebook claims to be a neutral forum that does not discriminate politically but instead only imposes “community standards” that serve the interest of “safety.” That is, without question, a lie.”

Inside Facebook’s war room: the battle to protect EU elections — The Guardian (an outpost of British military intelligence) laughably attempts to position Facebook as defending us against manipulation, rather than its raison d’être being social engineering.

“The Facebook employee assigned to handle communications relating to conservative bans (Alex Jones, Laura Loomer, Yiannopoulos) is the former Press Director of Hillary For America.” — But can be trusted to be “neutral”?!?

Facebook to suppress all websites that aren’t officially recognized by the corrupt, dishonest Wikipedia website — “[Wikipedia] isn’t peer reviewed by any means, and it’s just not a reliable source of information. And yet, a new censorship tool being introduced by Facebook will intentionally or inadvertently rely heavily on Wikipedia for the establishment of ‘credible’ news and information sites.”

Facebook Censorship: You’re Not Even Going To Believe This One. — It’s very scary being a content creator right now and having your livelihood attacked. I should know…

Facebook Suspends Raheem Kassam Over 11 YEAR OLD Post — Anything you have ever said can be used against you at any time.

Facebook Jail for truth tellers — “The Palestinian poet is subject to a relentless vilification campaign by both Zionists and Anti Zionist Zionists (AZZ). Yesterday, Nahida was suspended again. This time her crime was  posting a clip of a Palestinian man who just lost his home to an Israeli bomb.”

Facebook May Be Told to Censor Users’ Hateful Posts Globally — “Facebook Inc. may be ordered to remove offensive content posted by users in the European Union and then also hunt for similar posts anywhere in the world, according to an EU court opinion that the internet giant warned was a threat to freedom of speech.”

Facebook on trial for ‘censorship’ in Poland — “Historian Maciej Swirski has complained that Facebook in 2016 suspended a couple of accounts that provided information on an independence day march organised by far-right groups.”

INSTAGRAM TO “FACT CHECK” & REMOVE MEMES — “The social media giant, which is owned by Facebook, will use its 52 global “fact checking partners” to censor “false photos and memes on its platform,” according to Poynter.”

James Woods Releases New Statement About Twitter Suspending Him — “The Daily Wire has reached out to Twitter for clarification on what specific rules Woods’ tweet allegedly broke and will report on what answers the social media platform gives.” — My experience with Medium is that due process is not on offer.

Twitter Bans Analyst Who Revealed AntiFa Connections With Journalists. — “Former teacher and analyst Eoin Lenihan has been banned from Twitter after revealing major links between so-called “anti-extremism” campaigners and the hard-left AntiFa group. Lenihan published his findings in Quillette, revealing links between journalists who write for the the Guardian newspaper, HuffPost, Al Jazeera, and various other publications to the hard left group.”

The Dilley Show — “Periscope just nuked my account without any explanation.”

Jordan Sather reports — “YouTube removed my video on MMS three weeks ago, which was the most popular (truthful) video on YouTube about it.”

SecureTeam10 — “Guys, it appears that Youtube has just demonetized my entire channel. This may be the end.” — But no outcry from our liberal friends for an innocent channel on UFO sightings?!

What 40,000 Videos Tell Us About The Trending Tab — “Is the trending tab rigged against creators? Is late night dominating the charts?  Why does it feel your favorite controversial creator never trends.  All of that and more, in the first ever data-driven look at the trending tab.”

YouTube to Remove Thousands of Videos Pushing Extreme Views — “YouTube did not name any specific channels or videos that would be banned. But on Wednesday, numerous far-right creators began complaining that their videos had been deleted, or had been stripped of ads, presumably a result of the new policy.”

Ford Fischer — “Within minutes of @YouTube’s announcement of a new purge it appears they caught my outlet, which documents activism and extremism, in the crossfire. I was just notified my entire channel has been demonetized. I am a journalist whose work there is used in dozens of documentaries.”

ADL, YOUTUBE LAUNCH PARTNERSHIP TO FIGHT VIDEO ABUSE — “Many professional entities, including news organizations and media watchdogs like the Middle East Media Research Institute (MEMRI), use YouTube to dump raw footage, some of which prominently depicts hate speech from countries around the world. While these groups use the footage for educational or reporting purposes, much of it is provided on YouTube without explanation.”

NPR bans terms “Pro-Life”, “Unborn Baby”, “Abortion Doctor” — “I get what NPR is doing here. They are trying to seem objective while actually taking a side in the abortion debate. Notice the words that they choose to use when describing Abortion. They replace Pro-Choice and Pro-life.”

Huge Tech Company Tries To Ban Gun Makers From Using Its Products — “The customer-management system’s executives claim to be standing on their corporate foundational principles. They’re really walling off the industry that provides the means for American citizens to exercise basic constitutional rights.”

“The problem with banning far-right users from platforms like Facebook and Twitter? “They don’t just disappear,” argues @cjane87. “They don’t rethink their positions and decide to say no more. They go somewhere else.”” — In other words, support for full-on fascism from a “respectable” major publisher.

Swedish Government Is Looking to Ban Historic Rune Script and Viking Imagery as “Hate Symbols” Against Ethnic Groups — “But now the government is investigating banning them as “hate against ethnic groups” because neo-Nazi groups such as the Nordic Resistance Movement have been using these norse symbols. In particular the government is looking to ban the letter Tyr which is part of the runic alphabet.”

Morrissey posters removed from Merseyrail stations — “Adverts for the new album by the former Smiths singer have been taken down on the Merseyrail network. Morrissey has previously expressed support for the far-right For Britain party and earlier this month wore a badge with its logo on during a TV show, but he denies he is a racist.”

“Unfortunately in New Zealand our MSM is already demonizing the term “Red Pill”.  It seems we are all radicals who need to be addressed.”

Swedish Government Is Looking to Ban Historic Rune Script and Viking Imagery as “Hate Symbols” Against Ethnic Groups — “But now the government is investigating banning them as “hate against ethnic groups” because neo-Nazi groups such as the Nordic Resistance Movement have been using these norse symbols. In particular the government is looking to ban the letter Tyr which is part of the runic alphabet.”

Morrissey posters removed from Merseyrail stations — “Adverts for the new album by the former Smiths singer have been taken down on the Merseyrail network. Morrissey has previously expressed support for the far-right For Britain party and earlier this month wore a badge with its logo on during a TV show, but he denies he is a racist.”

“Unfortunately in New Zealand our MSM is already demonizing the term “Red Pill”.  It seems we are all radicals who need to be addressed.”

This newsletter takes time and effort to produce, and costs real money to run. It’s my real job, not a hobby. I have kids who need resources, and it’s no fun being a financial martyr — not even for the most noble of causes.

Paywalls aren’t my thing— I prefer to reach as many people as possible. If you value such open source citizen journalism, then please be a patron for its creators, including myself. Your support makes a big difference to me.