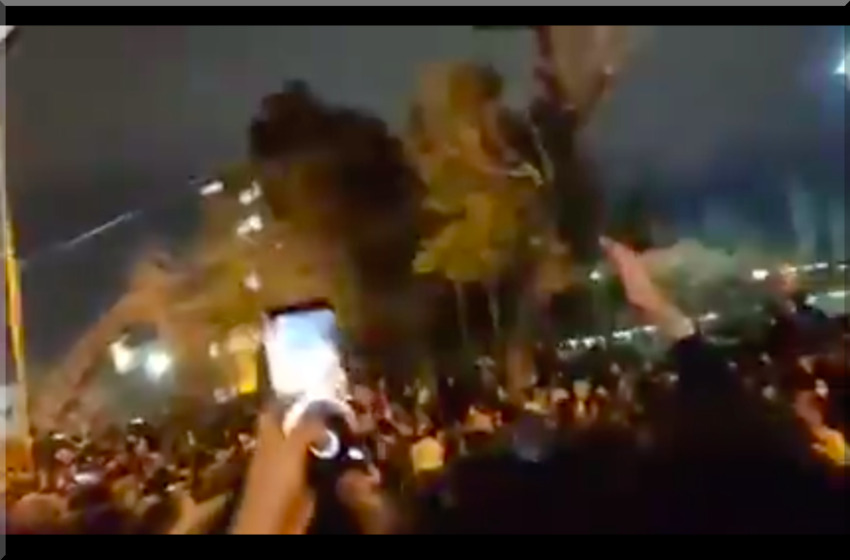 UPDATE: TENS OF THOUSANDS ARE NOW PROTESTING IN IRAN…REGIME FRIGHTENED !!

UPDATE: Tens of thousands are now protesting in Iran…regime frightened…

Mass protests have again broken out in Iran at the end of a chaotic week for the country, capped by the early Saturday admission and apology for the military accidentally shooting down a Ukrainian passenger plane, killing all 176 people on board.

Additionally, it appears that the British ambassador in Tehran, Rob Macaire, was arrested shortly after photographing the protests. Iranian state sources are alleging he was helping to “organize” and incite the protests.

The UK ambassador to Iran Rob Macaire has been arrested during the protests in Tehran on Saturday, Iran’s semi-official Tasnim news agency reported.

Macaire was present during the Saturday protests in front of Tehran’s Amir Kabir University and was arrested then, Tasnim’s report said.

In the first major protests since the Jan.2 US assassination of IRGC Quds Force chief Qasem Soleimani, angry student-led demonstrations broke out in front of Tehran’s Amir Kabir university demanding that Iran’s leaders, including Ayatollah Khamenei step down over their initially concealing the truth about the airline downing.

However, their size in the hundreds paled in comparison with prior anti-government protests in the tens of thousands last November across multiple cities, which actually saw possibly hundreds killed in clashes with police which often involved live gunfire to put down the crowds by security forces.

To the brave, long-suffering people of Iran: I’ve stood with you since the beginning of my Presidency, and my Administration will continue to stand with you. We are following your protests closely, and are inspired by your courage.

UPDATE: From the National Council of Resistance in Iran

A Large number of people have joined the demonstration by the students at Amir Kabir University, which has spilled over surrounding streets.  Thousands of people gathered in Hafez Street and areas around it, chanting, “Death to the dictator,” “Death to liars,” “Have no fear, we are all together,” Death to this murderous regime,” “Don’t call us seditionist, you are the sedition, you the oppressor,” “Death to this theocracy, for crimes in all these years,” “We did not give our lives to compromise and praise the murderous leader,” “Shame, shame to Khamenei,” “don’t call me seditionist, you are the sedition, oppressor,” “1,500 killed in November,” and “Soleimani is a murder, his leader is also a murderer.”

The suppressive forces attacked the protesters and fired teargas. They shut down the gates of the University, locking in those still inside the campus. Female students confronted the anti-riot units and calling them scoundrels. The protesters also tore down picture of Soleimani.

Protests against the murderous Mullahs in Tehran are spreading from the universities to the city streets. Below is a statement from the National Council of Resistance in Iran on the growing unrest.

The protests by students in several universities in Tehran over downing of the Ukrainian passenger flight by the IRGC is spreading. The anti-riot State Security Forces charged at Amirkabir University students in Hafez Street using tear gas. Protesters who were joined by the people chanted “I kill whoever killed my brother.”

#BREAKING: Protesters are chanting: “#Khamenei is a killer & his leadership is illegal” & also “Islamic Regime must be destroyed” in #Tehran now. Protests against #Iran‘s Islamic Regime over shot-down of Flight #PS752 of #Ukraine International Airlines by #IRGC|ASF. pic.twitter.com/jotcVXSP1b

Sharif university is a well known university in the world, 14 top genius grad. students of this university were in Ukraine Airplabe. Ppl are gathered in front of sharif university and chanting “ our enemy is here, they( regime) telling us lie by saying it is America.” 1.11.2020 https://t.co/a1rdMvgmQE

In several universities students chanted “We did not give martyrs, to praise the murderous leader,” “Don’t be afraid, we are all united,” “Do not call me seditionist, you are the sedition, the oppressor.”

In Sharif University in Tehran students chanted “IRGC is the shame of our country.”

In Amirkabir University the students lambasted the anti-riot units of anti-riot State Security Forces and chanted “Down with the liar.”

There was anti-regime protest in Noshiravani University in Babol (northern Iran).