It is no secret that I do not trust Senator Mitt Romney. I consider him a Democrat who was elected on a Republican ticket, and I will show you the proof.

Many Republicans, including me, have written Chairman Brown demanding that Senator Romney be censured for his vote to impeach and convict.

I recently read several news articles with Chairman Brown’s response to our requests for censure:

On Monday, the Utah GOP issued a remarkable statement lauding both Sens. Mitt Romney and Mike Lee for their votes during the second impeachment trial of Trump. Romney voted to convict the former commander in chief for inciting the deadly riot at the U.S. Capitol on January 6, while Lee voted to acquit. The statement warned about a political party focused on “unanimity of thought.”

It followed an effort by some Utah Republicans who began circulating a motion to censure the former GOP presidential nominee.

The Senate’s failure to convict Trump for the attempted insurrection runs counter to the majority of public opinion nationally but is in line with the mainstream of the GOP.

Thousands of voters across the nation have abandoned the Republican Party in the aftermath of the attack on the Capitol. In Utah, the GOP rolls have dipped by 7,600 voters since January.”

“As a party, we are focused on supporting our elected officials and unifying around those principles that got them elected,” Utah GOP chairman Derek Brown said in an interview with FOX 13. “At this point, we believe it is crucial to focus on unifying our party, working together to retain those new voters who joined the Republican Party this last year, while bringing back any who may have left.”

However, the Reuters Utah Fact Check group provided the most nonsensical and ridiculous quote from Chairman Brown:

“The Utah GOP official statement regarding the impeachment vote of the two Utah senators (Romney and Mike Lee, the latter voted to acquit Trump), says: “The differences between our own Utah Republicans showcase a diversity of thought […] There is power in our differences as a political party and we look forward to each senator explaining their votes to the people of Utah. Disagreement is natural and healthy in a party […] As 2021 begins, we look neither to the past, nor to be punitive.”

First of all, Senator Romney is not even close to being in the same league as Senator Lee. Senator Lee does an outstanding job of representing the citizens of Utah, and his voting record proves it.

Using Senator Lee’s  his top 50 votes over a rolling six-year period shows that Senator Lee has given 96% of his votes supporting the Republican agenda. As a result, he earned a Grade A Liberty Score from the Conservative Review. I applaud Senator Lee and cannot tell him how much I appreciate all that he has done for our country: 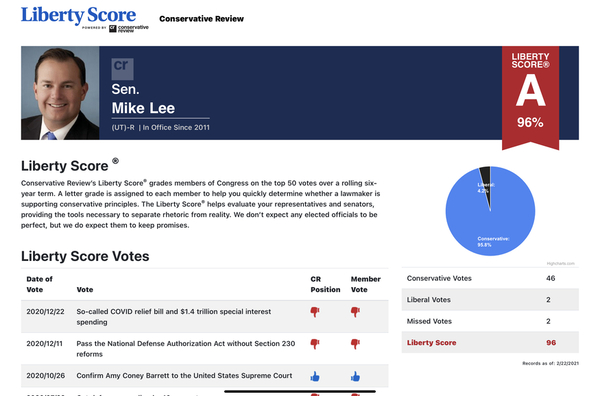 Senator Romney has done nothing but put his efforts into undermining the Republican agenda. His voting record, along with a few other key facts, proves he is not a Republican and that he has done all within his power to upset the balance of power in our Senate and Congress.

Senator Romney’s votes since he has taken office shows he has given the Democrats 50% of votes. He earned a grade F Liberty Score from the Conservative Review. 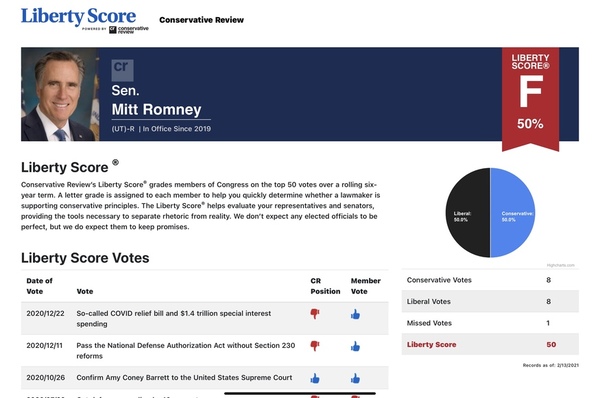 Chairman Brown says, “The differences between our own Utah Republicans showcase a diversity of thought. There is power in our differences as a political party, and we look forward to each senator explaining their votes to the people of Utah. Disagreement is natural and healthy in a party.”

What a load of BS. In the aftermath of the attack on the Capitol, 7,600 Republicans are no longer on the Utah voter rolls. How convenient to blame the loss of Republican voters on the attack of the Capitol. Could it be possible that 7,600 voters are fed up with Romney? Could it be possible that 7,600 Utah voters are fed up with the Republican Party? Another example of BS.

Now Chairman Brown, explain to us precisely what Romney has contributed to the balance of power. Explain exactly to us how he supported the people who elected him.

The fact is, Chairman Brown, you are a coward. You are afraid of Romney and the power he wields. The truth is, you are no better than he is. Romney is not a man of God. He portrays himself as someone he truly is not. He defrauded the people of Utah by presenting himself to them as a Republican. He is a cold, aloof, self-absorbed, and arrogant man who is full of himself. If you are not in his inner circle, he doesn’t bother to even speak to you. He votes for his will and not the will of the people. And you want us to believe you celebrate the diversity of your two senators? You made a fool of yourself.

Because of GOP leaders such as yourself, we had districts identified by the GOP as districts that could be won – but we never had any candidates. Those seats were handed to the democrats unopposed. Instead, we had the GOP funding the democrats who were running on Republican tickets. What did the GOP do to train new candidates on fundraising and events, what should be on their websites, how to correctly set-up campaign donation accounts? What did the GOP do to organize us – the voters? Nothing! You did nothing!

We organized ourselves. We trained many of the new candidates. We wrote them advising them of what they should do. Some listened, and some didn’t. We didn’t have adequate numbers validating poll books in advance, manning the polls and the tabulation centers. Why? Because we have lazy GOP leaders. Many GOP leaders do not have a public email address for voters to contact them. Do you realize the message that it sends? The message is you don’t care about the voters, and you don’t want to hear from us. Most astonishing, Chairwoman Ronna McDaniel does not have an email for her office. If you won’t talk to us and don’t want to hear from us, how can you possibly know what is critical for the voters?

The problem is the elite ruling class within the Republican Party doesn’t believe there is a seat at the table for us in the governance of our country. The good ole boys club prevails.

This is what many of us are going to do:

A. They were in on planning the breach, or

B. They helped facilitate it.

Our Congress dares to compare the Capitol breach to 911. What a punch in the gut this is to every American who lost a father, husband, mother, wife, child, aunt, uncle, grandparent, cousin, a friend on September 11, 2001. Thousands died on 9/11 with devastation beyond our ability to process it. We have a bunch of sanctimonious, self-righteous hypocrites screaming about the attack on one of the most sacred institutions of our country. A sacred institution they defile every day with their lies, deceit, and theft of taxpayer money.

Because of senators like Romney, not one Democrat will be held accountable for their illicit and nefarious actions. The DOJ and FBI will remain corrupt and continue to run the protection racket for the ruling class.

Why would the Republican Party think that we would believe our 2022 election will be fair? The fact is we won’t until the 2020 election has been remedied.

You, Chairman Brown, have chosen not to do your job, and neither has Ronna McDaniel.

You can find me on Gab, Parler, and Telegram @TheSheilaG2020