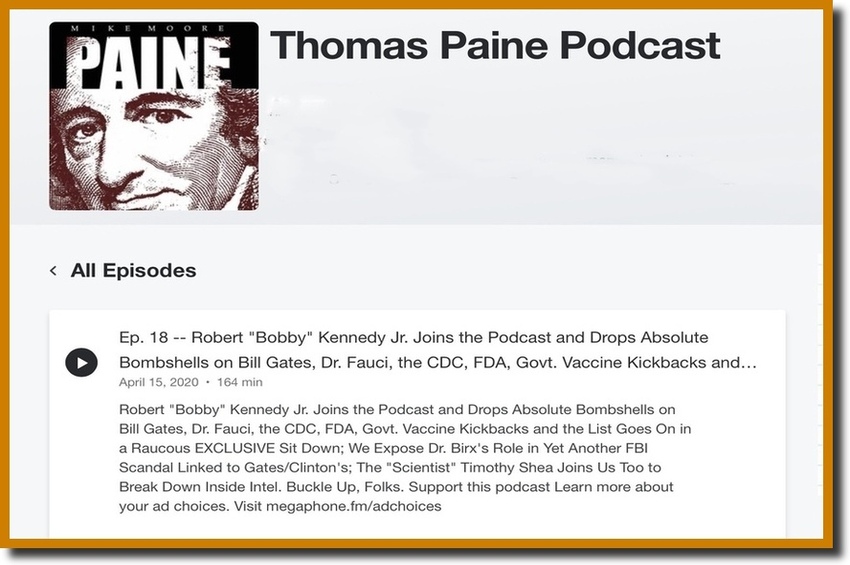 From the War Room

Thomas Paine is one of my absolute favorites. I listened to his podcast Season 1, Episode 18 – Robert “Bobby” Kennedy Jr. Drops Absolute Bombshells on Bill Gates, Dr. Fauci, the CDC, FDA, and government vaccine kickbacks. This the link where you can listen to it as well. And, I recommend you do!

After listening to it, I have absolutely zero doubt that what I previously thought was indeed true. Bobby Kennedy Jr. provided the verifiable facts I needed to firm my belief that Fauci, Gates, Redfield, and Birx are leading a fraud upon the American people.

Dr. Fauci suggested we may need to wear goggles. Know this Fauci – I will not!  The CDC – Dr. Jha says that we aren’t doing enough testing, and the virus may be spreading everywhere, and the sky is going to fall in, and we all will die. We are not!

I have had enough of being duped by Redfield, Fauci, Birx and the gang. Fire them and throw their devious butts out the door. Yes, this makes me very angry. I don’t like devious, self absorbed and self serving public servants. Get rid of them!

I want our President to gut the inept, sloppy CDC and fire Redfield, Fauci, and Birx. They want us to stay locked up and wear masks until everyone is inoculated with a vaccine that “might” be available by the end of the year and not subject to the same rigorous testing as medicine. I learned why we should refuse to take the vaccine and clearly understand how it is developed, sold, and mandated without testing or trial. Health and Human Services and the agencies that report to it; NIH, CDC, and the FDA genuinely believe we cannot do critical thinking, do research, and decide what is best for ourselves. They truly believe we are sheep and will follow the flock. They genuinely underestimate the power we have collectively to throw their asses out the damn door, which is what we should do.

Let’s do some critical thinking.

325,869,588 of us do not have the virus. How long do you think it will take to vaccinate all of us “IF” or whenever a vaccine becomes available?  For example – it would take vaccinating 892,793 people every single day for 1 year solid. It won’t happen within that time frame.

In the meantime, the Fauci tells us initially we don’t need masks. Now he tells us we need to wear masks. He is now suggesting we may need to wear goggles.

Here are the facts that I learned from the Thomas Paine (True Pundit) podcast, Season 1,  Episode 18, with Robert Kennedy, Jr as the guest. It was so enlightening:

Fact 1 – Medicine requires the gold standard of testing – placebo testing. Neither the researcher nor the subject knows who has received the medicine or the sugar pill. The researcher watches them for a period of about 5 yrs.

Fact 2 – Vaccines are not considered medicine and are exempt from this kind of testing. CDC was formerly called the Public Health Agency and was a quasi military-run organization. The vaccine program was initially conceived as a national security defense mechanism against biological attack. They determined that if they call vaccines biologicals, it would exempt them from safety testing and could be deployed quickly. If they called it a medicine, it would have to be rigorously tested over an extensive amount of time.

Fact 3- Vaccines can and have injured people resulting in brain damage to encephalitis. So in 1986, congress ruled that the only liability applicable to vaccines would be if the company knew of an injury and didn’t list it on the manufacturers insert with the product. There is no incentive to make vaccines safe.

1) Liability is the greatest expense of making a drug,

2) After drug development which is rigorous testing of the drug is the second largest expense, and,

3) Market or advertising costs is the 3rd largest expense without the vaccine being mandated.

Congress removed all three of these obstacles and made production of vaccines just like printing money – no      liability, no testing, and mandating the vaccine.

Fact 5 – If a pharmaceutical company can get a vaccine from the CDC schedule, it is a billion-dollar profit in their pockets.

Fact 6 – Today’s kids get 72 vaccines. After 1989 these kids are the sickest generation of all. According to HHS (Health and Human Services), 54% of those born after 1989 have chronic disease meaning developmental disorders, ADHD, autoimmune diseases like diabetes and rheumatoid arthritis, allergies, asthma, eczema, allergies like peanut allergy and so on. We have traded childhood diseases, which is a childhood ritual that had very few deaths for vaccines. Measles for example had the most deaths with Black children from the Mississippi Delta. Most of these children suffered from malnutrition and other chronic conditions. Malnutrition is what makes measles deadly.

Since the 1900’s kids IQ’s went up 3 IQ points every 10 yrs steadily. 1989 was the first generation IQ points dropped and it has dropped 7 points to date.

Fact 7 – First of all, our government develops all vaccines – Pharmaceuticals only manufacture it.

The CDC has $11.5 billion budget. The FDA gets 50 percent of its budget from big pharma. The government develops the vaccine and gives it to 4 manufacturers to make; Pfizer, Merk, Glaxo, and Sanifo. They collect money on every vial sold.

Fact 8 – The CDC uses 50% of its budget for buying vaccines from these 4 companies and then distributes them for implementation.

The CDC buys the vaccine back that we gave to these 4 pharmaceutical companies at a premium prices -sometimes at 2x the price that the companies sell it to Europe.

Fact 9 – The CDC is buying and distributing $5 billion of vaccines a year.

HHS rules allow an agency scientist or an official of the agency who does actual work on the vaccine to own part of the vaccine patents. They are allowed to retain a royalty limited to $150K per year per vaccine.

Fact 10 – Fauci has many many vaccine patents. Fauci’s agency is doing a 50/50 split with Moderno, who is doing the COVID vaccine, and the agency will collect half of the royalties. There is no limit that an agency can receive.

There is no daylight between these agencies, scientists, government officials, and big pharma. They are now subsidiaries of the pharmaceutical industry.

So now we know why Hydroxychloriquine is being bashed by the media and censored by social media and other news outlets. Pharmaceuticals are 50% or more of their ad revenues, including FOX. They are being blackmailed by pharmaceuticals – bash it hydroxychloroquine or we pull or advertising!

Think of all of the vaccines children receive to prevent childhood disease. Measles, chicken pox, mumps, and so many more. There were never vast amounts of deaths from these diseases. But vaccines exist today for so many other diseases. Is it because it is necessary or is it because of the royalties the developers receive and the profits that big pharma makes off of manufacturing it?  I think it is the latter.

Vaccines are uncontrolled, unregulated, and a big money making industry.

Fact 12 – We have all seen the 2005 and 2010 video of Dr. Fauci touting the efficacy of hydroxychloroquine in treating other forms of covid. It was from this, the French doctor began using it on it Covid 19 patients. 26 Democratic governors banned physicians from prescribing this drug as a treatment. The HHS officials of these agencies have a great incentive and devious reason for keeping hydroxychloroquine from us.

Instead, the HHS officials tell those who test positive and are asymptomatic to self quarantine for 14 days. Meanwhile, others in the household do the shopping and other errands. That is how the virus is spreading. These officials have known all along that HCQ kills the virus in 5 days. They know it costs less than $50 per person for a course of treatment. They know if the person who tests positive and the other members start the treatment at the same time it will kill the virus in 5 days. They knew this all along.

They are holding it back to make their profit off of the vaccine which by the way will be mandatory.

Fact 13 – We all have heard varying stories of how Judy Mikovits was fired by Tony Fauci and he somehow ended up with the HIV patent she supposedly developed. This patent is being used to make vaccines for the corona virus. Moderno will be the first to deliver the vaccine and has a 50/50 split with the CDC. Gates is also invested in it.

Tony Fauci’s agency will collect half and there is no limit to what an agency can collect.

Fact 15: Dr. Redfield left CDC 1994-1995 after screwing up the Hiv clinical trials and rigging them. He is the cofounder of the University of Maryland virology clinic. Bill Gates is heavily invested in that and has given millions and millions of dollars to this clinic. Now Redfield is the one that will be rubber stamping the corona virus for the government and Gates has a hand in it.

Fact 16: Dr. Birx and her association with the Indian company, Ranbaxy Pharmaceutical makes her as complicit Ranbaxy  in pumping poison into people. Birx beore she was in her current position was with the CDC for years while this was going on:. In May 2013, Ranbaxy Pharmaceutical pleaded guilty to felony charges relating to the manufacture and distribution of certain adulterated drugs made at two of Ranbaxy’s manufacturing facilities in India, and misrepresenting clinical generic drug data. Ranbaxy pleaded guilty to three felony FDCA counts, and four felony counts of knowingly making materially false statements to the FDA. Included in the adulterated products were antiretroviral (ARV) drugs destined for treatment of HIV/AIDS in Africa. Birx knew from 2004 that Ranbaxy Pharmaceutical was pumping poison into people. She could have put the breaks on the guys in India and the Clinton foundation she didn’t do anything.

Fact 17: Dr. Coleen Boyle’s job before she worked at the CDC was to say that agent orange did not have anything to do with the leukemias and cancers appearing in vietnam vets to protect the VA and fed government from all of the vets’ agent orange claims. She got caught and she was lying. She exonerated the CDC and the Pentagon from agent orange. In 1975 Congress held hearings which proved she was lying. What happened to Boyle? She was appointed head of the vaccine department at the CDC.

“The way these people got promoted was by lying their heads off. “

These people are feeding us garbage so they can line their pockets. It is time to put a stop to this and the efforts of Pharmaceuticals to line the coffers.

It will certainly take more than a year for everyone to be vaccinated. Waiting for a vaccine is nonsensical. Waiting for herd immunity when there are 325,869,588 who are not sick will also take a significant amount of time.

Mr. President, it is over due. Clean out HHS, stop the patents and royalties. If people in these agencies want to keep their jobs, make them divest their interests with these companies. Start dispensing hyrdroxychloroquine to those who test positive and other members in the household at the same time. Shut the virus down.

I have had enough of being duped by Redfield, Fauci, Birx and the gang. Fire them and throw their devious butts out the door. Yes, this makes me very angry. I don’t like devious, self absorbed and self serving public servants. Get rid of them

Mr. President please start dispensing HCQ so we can get back to normal life!