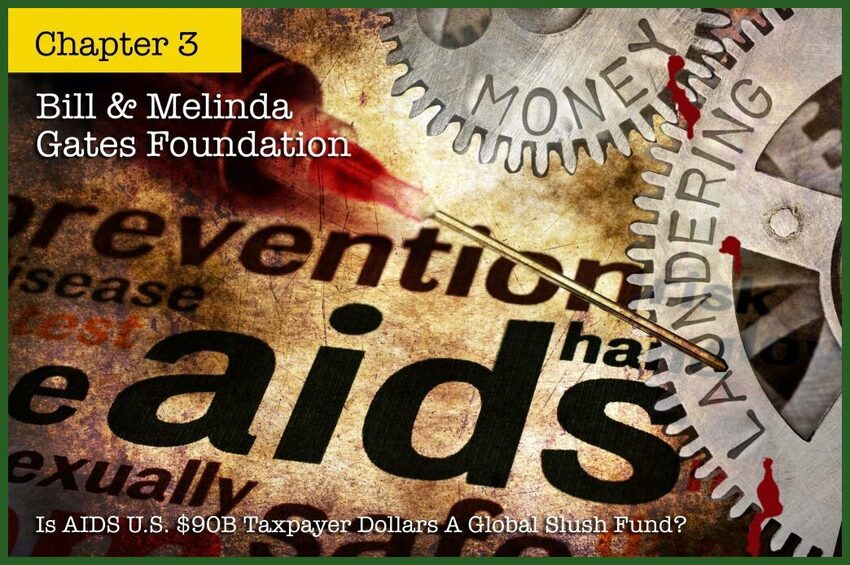 hapter one revealed the historical timeline, involving three former U.S. presidents, of the creation of the Global Fund and PEPFAR, in addition to the big players that put this into motion, along with numerous NGOs that jumped on board this gravy train. It also exposed two huge factors of how AIDS evolved. Chapter one is a must read before continuing. Chapter two disclosed the three factors in determining if this is a fraud and a slush fund, and dove deep into the Global Fund and the scandals that surround it.

In this chapter, we will explore the Bill & Melinda Gates Foundation connections to this $90B taxpayer slush fund, show how money is moved around, Gates’ other charities and investments, huge conflicts of interest with the pharmaceutical industry, health policymakers, universities, and some major scandals involved. By the end of this chapter, there will be no doubt as to who all controls the entire health industry worldwide.

“Gates has created a ‘cartel,’ with research leaders linked so closely that each has a vested interest to safeguard the work of others. The result is that obtaining an independent review of scientific evidence is becoming increasingly difficult.” – Dr. Artara Kochi, former head of the WHO’s malaria program.

Bill Gates friend and partner, Warren Buffett, who has endowed $30 billion in Berkshire Hathaway shares to the Gates Foundation, had this to say in 2011, regarding the extraordinary tax breaks they receive:

While most Americans struggle to make ends meet, we mega-rich continue to get our extraordinary tax breaks. Some of us are investment managers who earn billions from our daily labors but are allowed to classify our income as ‘carried interest,’ thereby getting a bargain 15 percent tax rate. Others own stock index futures for 10 minutes and have 60 percent of their gain taxed at 15 percent, as if they’d been long-term investors. These and other blessings are showered upon us by legislators in Washington who feel compelled to protect us, much as if we were spotted owls or some other endangered species. My friends and I have been coddled long enough by a billionaire-friendly Congress.

The amount of money that flows through the Gates Foundation from taxpayer dollars, is shocking. How it is disbursed between his multiple charities, on to friends with NGOs, and UN factions, is staggering. The documentation that the Gates Foundation pays for from universities, foundations, institutes, and George Soros, to bolster their agendas, is alarming. What is revealed in this 29-page report will stun you!

To continue reading this chapter and learn all about the Bill & Melinda Gates Foundation and the AIDS slush fund, become a Patron & get FULL ACCESS to the entire book!

All contribution levels receive access to each chapter of the book in PDF download, as well as updates, podcasts, interviews, and video reports on numerous other topics. There are 25+ chapters rolling out over the next several months. It is going to blow the lid off this industry!

Download all chapters in pdf format, available in The Bookshop. >>