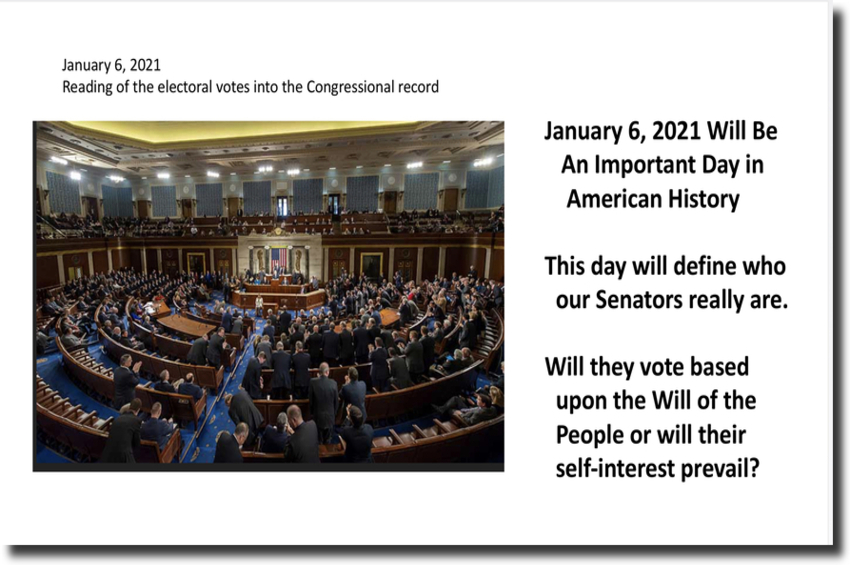 We have our Majority Senate Leader, Mitch McConnell -KY making deals in the Senate to bring the $2000 payment to Americans in exchange for a guaranteed vote to support the governor’s electors on January 6, 2021. He sure talked a good game for the President, made it look to us as if the President had his full support while stabbing all of us in the back. Why? Mitch has heavy ties to China through his in-law’s shipping business, Foremost. Hey, Mitch is only doing what China is telling him to do. Mitch is experiencing the same dilemma as Georgia Governer Kemp and his Secretary of State, Rafensperger. When you accept money from China, you are indebted for life. When you don’t pay your debt when asked, the consequences can be severe, up to and including death. However, I don’t pity them or feel sorry for them. They willingly agreed to sell themselves to the devil.

Mitch McConnell a few days ago congratulated Biden on becoming the President-Elect. That’s right, Mitch, congratulated cheating, lying, deceiving China Joe. But is that alone enough to label Mitch a traitorous bastard? No, it isn’t. But maybe:

It is enough for me to know that I do not support or trust Mitch McConnell.

The fact that Mitch accepted a campaign donation from Alphabet, the parent company to Google, and many donations from big pharma and insurance companies did not sit well with me. Neither did Koch’s donation sit well with me. Koch is not our friend.

Then we have the conflict of interest that Mitch and his wife Elaine Chao have in their present jobs. Elaine’s father owns a large shipping company. Expansion and building of the ships are financed by……..the Chinese Communist Party. Elaine Chao is the US Secretary of Transportation. This government agency governs US shipping. Neither are in favor of China sanctions because it could destroy her father’s business. They are in too far to pull out.

When adding the fact that Mitch McConnell is clear that he is not endorsing Senators to object on the electoral votes on 1/6/21, his campaign donors and his very close relationship to the Chinese Communist Party, his statement rejecting the Senate’s objective of the electoral votes clearly gave him away as a deceiver and liar.

Senator Lisa Murkowski, Alaska – R, announced she would be voting to support the governors’ submitted electors based upon the lack of evidence presented to our corrupted courts. This Senator and her staff have never put a pen to paper to sponsor or co-sponsor an original bill. She does it the easy way. Lobbyists write the bills; she takes them to the floor as the sponsor or co-sponsor for a vote, and then she receives handsome junkets, paid dinners, paid vacations, and campaign donations for her hard work. Murkowski supports the lobbyists. She does not support, respect, or recognize the people who elected her. She is in the game for herself and herself only. It could even be possible China is blackmailing her.

Then I found the Marshall Report dated December 26, 2020. It has some damning information about Mike Pence.  Yes, the Mike Pence we thought to be loyal to our President. The Mike Pence we thought was a Christian and Godly man. After reading this report, I no longer believe he is any of that, and I have zero faith that he will do anything on January 6, 2021, other than certify the results.

jhoppe – Joe Hoppe – a former member of the Minnesota House of Representatives January 7, 2003 – January 7, 2019, member of the Republican Party of MN, representing District 47B. Before becoming a politician, Hoppe worked as a local businessman and in communications

jatterholt – James D Atterholt chief of staff to Governor Mike Pence from 2014 through 2016.

The website and the emails take place in October 2016. In October 2016 keep in mind that Pence was on the ticket with our President.

Then we have witnessed the Riffe between the President’s staff and our darlings Sidney Powell and Lin Wood. Why Jenna Ellis is on the team is beyond me. Jenna Ellis is an inexperienced lawyer and a fraud who claimed to be a be professor at some college who never offered a law degree. She has never been involved in constitutional law. Cipollone is another attorney that I do not believe in. He is in the game for his benefit. Do you remember when Rep Mark Meadows, now chief of staff, exploded at the two forensic whistleblowers who audited the Clinton Foundation because they refused to turn over 6,000 pages of their audit? To do so would have invalidated their whistleblower status and voided any payment they may receive. Who is Mark Meadows to disobey the President’s order to accommodate Sidney Powell?

Who did we vote for?

At the end of 2018, our President expressed his dissatisfaction with our elected officials. They did not stick together, and they certainly did not support them. In early 2019, I used the Conservative Review Scorecard to provide each Republican member of Congress with a personal performance review.

I sent it to them individually, I sent it to all of Congress and published them on Twitter for all to read. CR measures how each member of Congress voted over a rolling six-year period. CR lists the bills each voted on, how they cast their vote, determines if the vote supported the republican issue or democrat issue. Each Senator and Representative is then assigned a grade of A through F based upon the number votes given to the democrats.

It was a shocker and working splendidly until Twitter took my accounts down. I had all of the data before CR took the scorecard down in December 2020. I don’t know if they plan to bring it back. However, it is all available on the Wayback Machine.

January 6, 2021 is looming down upon us. Let’s take a look at the Senators we reelected on 11/3/2020. I have included the CR Grade and the percentage of votes given to the Democrats that earned them the grade.

Let me point this out;

2016-2018 we had control of both chambers, and it was squandered with nothing being accomplished. Mitch was Senate Majority Leader with Paul Ryan as Speaker of the House. We now know why Mitch hasn’t done anything. We now know Ryan hated Trump because it deprived Ryan of a potential Vice Presidency.

2019-2020 the Republicans held the majority for the Senate, and the Democrats controlled the House. Again, Mitch did nothing when opportunities presented itself. Not many bills but plenty of investigations.

In summary, what you are looking at is primarily built around bills passed between 2014 – 2016 with the bulk occurring in the 2014 and 2015 years. None the less, it is very telling.

Grade A – is excellent

Grades B and C – are good and could indicate attempts at bi-partisanship. 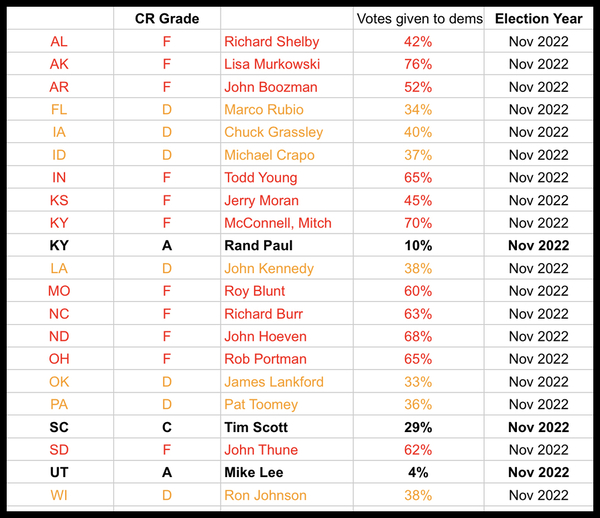 This is really very disgusting.  We have 13 keepers – all in bold black type.

It’s clear the D’s and F’s exhibit actions that do not match their words. That means they are untrustworthy and deceivers. We elected a bunch of RINOs to the Senate in 2020. We are stuck with them for another six years.

But we can do something about 2022 and 2024. The Republican Party has failed us. They used us and lied to us. I know there is a call to start a new party. Realistically, it is expensive, time-consuming and it won’t be off the ground in time to impact 2022.

Why not join the Tea Party? I think they would love to have us and will find us, suitable candidates. Be smart. Without us, the Republican party will never again win a Presidency. They will never again control either chamber without us.

They used us and they are abusing us.  It’s time to put a stop to it.

You can find me on Twitter and Parler @TheSheilaG2020 (same handle for both). You can also join both the Conservate Choice Campaign  and/or my personal website at Maga First  You can also subscribe to my Telegram channel The Sheila G