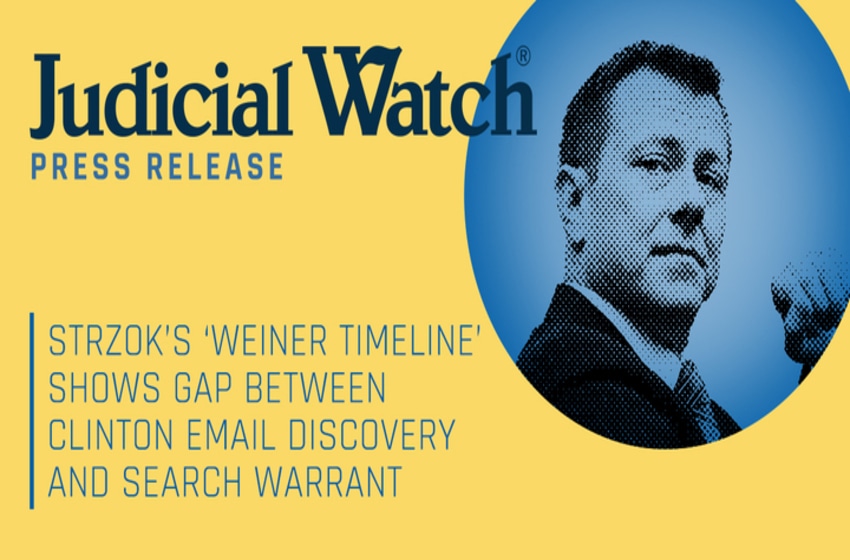 (Washington, DC) – Judicial Watch announced today it received 180 pages of records of communications between former FBI official Peter Strzok and former FBI attorney Lisa Page that include Strzok’s “weiner timeline,” which shows a time gap of almost a month between the discovery of former Secretary of State Hillary Clinton’s emails on the laptop of disgraced former Congressman Anthony Weiner and the obtaining of a search warrant.

On November 3, 2016, Strzok sends an email to Page with a “weiner timeline.” The document shows that on September 28, 2016, the Assistant Director in Charge (ADIC) of the New York Office of the FBI reported “potential MYE-related material,” referring to Midyear Exam, which was the code name of the FBI’s Clinton email investigation. The timeline shows that not until October 30, almost a month after the discovery, was a search warrant for the emails obtained:

· NYO notes processing is crashing system and not complete, but during troubleshooting observes material potentially related to MYE (clintonemail.com and state.gov domains) seen during course of review

·Request to NYO to gather basic facts (numbers, domains, etc) based on their review

DD advised of results of call with MYE team conclusion material should be looked at; DD directs briefing to D

A partial Strzok timeline was included in Department of Justice Inspector General Michael Horowitz’s June 2018 report on the Clinton email investigation. Also, the report suggested possible bias by Strzok: “[W]e did not have confidence that Strzok’s decision to prioritize the Russia investigation over following up on the Midyear-related investigative lead discovered on the Weiner laptop was free from bias.”

The new documents are the latest production from a January 2018 Freedom of Information Act (FOIA) lawsuit filed after the DOJ failed to respond to a December 2017 request for all communications between Strzok and Page (Judicial Watch v. U.S. Department of Justice (No. 1:18-cv-00154)).

The FBI is only processing the records at a rate of 500 pages per month and has refused to process text messages. At this rate, the production of these communications won’t be completed until late 2021.

The new records uncovered by Judicial Watch also include an email chain that concludes on November 5, 2016 — the day before Comey notified Congress that the FBI had not changed its July conclusion – with the subject line “Drafting” in which Strzok indicates that he is working on the “initial review” of “the data” for an upcoming statement.

In a November 6, 2016, email with the subject line “Request for conference call bridge” Strzok tells senior FBI officials: “[Redacted], Jon and I completed our review of all of the potential HRC work emails on the laptop. We found no previously unknown, potentially classified emails on the media [laptop].”

Reportedly, only 3,077 of the more than 300,000 emails found on the Weiner laptop “were directly reviewed for classified or incriminating information. Three FBI officials completed that work in a single 12-hour spurt the day before Comey again cleared Clinton of criminal charges.”

The emails also include an October 30, 2016, email titled “MYE data update,” in which Strzok tells other top FBI officials: “The discussion of the classified email remains accurate.”

In an October 31, 2016, email thread discussing a New York Times article about the FBI conducting a review of Huma Abedin’s emails found on Weiner’s laptop that Strzok circulated to then-Deputy Assistant Director of Counterintelligence Jonathan Moffa, then-Assistant Director for Counterintelligence Bill Priestap, and redacted persons, Moffa says: “I think [redacted],” to which Strzok replies, “Yes. Yes we did. Makes you wonder who dialed in …” Moffa responds, “Sure does. First reference I’m ever aware of to our review network too.”

On November 1, 2016, a redacted official in the Director’s Office emails Strzok, Page and other redacted persons with a “Media question,” asking, “Politico asks why all of Huma’s electronic devices she may have used were not subpoenaed early on. Could you please provide any guidance on how I should respond? [Redacted]. Thank you.” Strzok replies, “Hi [redacted].”

On October 31, 2016, Strzok forwarded to Page a Mother Jones article titled “A Veteran Spy Has Given the FBI Information Alleging a Russian Operation to Cultivate Donald Trump,” concerning the allegations by a “former senior intelligence officer for a Western country who specialized in Russian counterintelligence” that the Russian government “has for years tried to co-opt and assist Trump.”

(The Slate article that alleged that Trump’s campaign set up a covert communication system with Russia during the 2016 election using a computer server in the United States and another owned by a Russian bank has been widely debunked.)

On November 14, 2016, New York Times reporter Matt Apuzzo emailed an unidentified FBI official asking, “We got this in the mail today. Any truth to it?” Attached was an “Affidavit for a Criminal Arrest Warrant and Search Warrants,” purporting to have been sworn out by an FBI agent and allegedly “charging DONALD JOHN TRUMP with conspiracy to commit espionage …” The FBI official forwarded it to Strzok and other redacted officials, saying, “For your awareness. The NYT provided the attached document to us today in order to verify its authenticity. It is supposedly an affidavit in support of espionage charges against Donald John Trump. They received it in the mail today. They doubt it is an authentic document noting there are numerous inaccuracies. Wanted to provide it for your awareness.” Strzok forwards it to Page, saying, “Told them it was not authentic. [Redacted].”

Judicial Watch also received productions of 171 pages and 119 pages of Strzok-Page emails showing the FBI actively pushed stories to the media to stoke its claim that the bureau was “highly confident” Russia was “behind recent hacks.” One email shows Strzok telling Page about an appearance on CNN by then-Assistant Attorney General for National Security John Carlin: “On CNN now talking about hacking of state election systems. NICE coordination NSD….”

The new emails also show Strzok, Page and other high-ranking FBI officials discussing the “alleged destruction of laptops;” a lengthy discussion about how to respond to a reporter’s inquiry into an alleged quid pro quo related to Hillary Clinton’s emails in which the State Department would create additional FBI overseas positions; and Strzok defending Director James Comey after a former FBI official said Comey had “thrown all the agents under the bus.”

“These new records show how Hillary Clinton was protected from investigation over the Weiner laptop by the FBI for a full month during the presidential campaign,” said Judicial Watch President Tom Fitton. “And the documents further confirm that Strzok pushed Russia smears of Trump laundered through the media within the FBI. No wonder the FBI is slow rolling the release of these documents.”

Judicial Watch recently uncovered records showing that Clinton apologized to the FBI over her email abuses, but that apology was not in the FBI 302 report documenting her interview. Records also showed that Strzok had information on an intelligence briefing for then-candidate Trump.

In early February 2020, Judicial Watch made public several emails between Strzok and Pagethat showed their direct involvement in the opening of Crossfire Hurricane, the bureau’s investigation of alleged collusion between the Trump campaign and Russia. The records also showed “confirmed classified emails” on Clinton’s unsecure, non-state.gov email server “beyond the number presented” in Comey’s statements.