The North Carolina Department of Revenue announced Wednesday that President Biden’s student-loan forgiveness will be considered taxable income in the Tar Heel State.

Residents of some other states are in for a similar buzzkill, levying a max tax that could range from $300 to $1,100, depending on the jurisdiction. Mississippi also confirmed last week that it will impose a tax.

In August, Biden made a long-procrastinated decision to honor his 2020 debt-cancellation campaign pledge. Specifically, he’s forgiving up to $10,000 of federal student loan debt for those who make under $125,000 a year, and up to $20,000 for people who received Pell Grants, which target low-income students.

While debt cancellation is typically taxable, the federal government specifically exempted student loan forgiveness from 2021 through 2025.

Several of them have already clarified that they won’t tax student debt relief. On the other hand, in addition to North Carolina and Mississippi, Arkansas, Minnesota and Wisconsin also “appear to be on track” to do so, according to the Tax Foundation’s Jared Walczak.

The fact that many states legislatures have recessed for the year complicates some officials’ interest in intervening on behalf of student loan debtors.

Some people aren’t pleased with the situation… 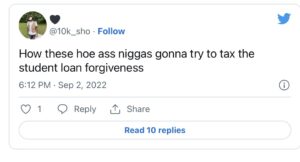