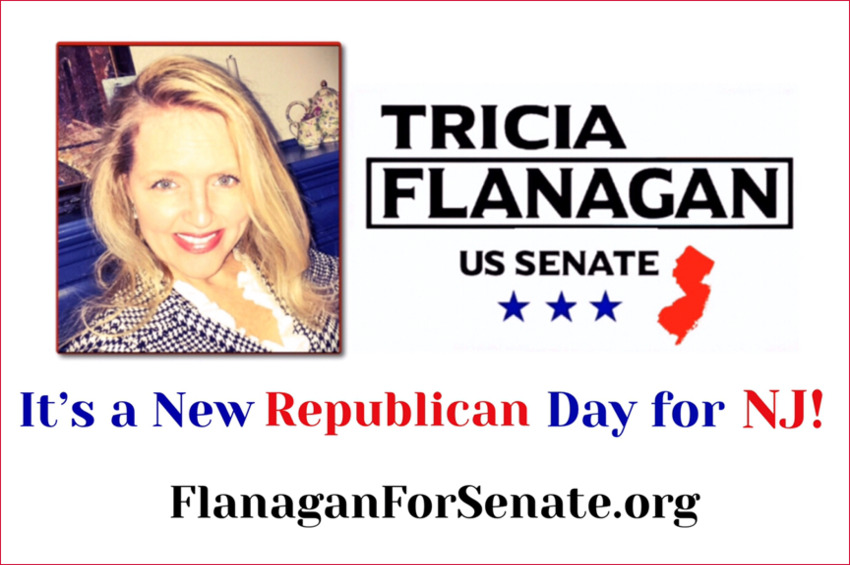 As a Republican, I am disappointed in NJ’s Establishment leadership. Decisions for New Jersey U.S. Senate Representation are being made politically without consideration for the issues facing the people. Voters have been misinformed or uninformed of the politicization of its Election Process. The Establishment’s use of an antiquated system where a few people from 21 of NJ’s Counties award a bias to their “darling” Candidate. A process where only a few “INFLUENCE” election results by attempting to reduce the FULL POWER of YOUR vote with a POLITICALLY AWARDED “LINE”.

NJ GOP ESTABLISHMENT, IS A NJ CANDIDATE WITHOUT A “LINE” STILL A CANDIDATE?

As U.S. Senator, Tricia Flanagan does not want to be in the position where she cannot have the FREEDOM to FIGHT for you because of owing a PAC, Lobbyist or Party Establishment a “Favor” from a “LINE” awarded to her. Rather Tricia has chosen to “Buck the LINE”. NJ’s COUNTY GOP’s aren’t too happy with this, and are obstructing her opportunity to fight for us.

In my opinion, “Lines” have no purpose for NJ other than diluting or weakening the power of YOUR vote; even manipulating the choice for whom you cast your VOTE on July 7th, 2020. Unbeknownst to most NJ voters, a handful of people in your county have ALREADY been awarding POLITICAL LINES since January months prior to the PRIMARY! STEALING the Power of your Vote!

There are five candidates running for the U.S. Senate in NJ. However, the GOP only recognizes two. Why? Because two candidates received a COUNTY GOP “LINE”! The message below demonstrates an egregious example of political actions of a County Committee; Instructing treatment toward Candidates to whom a LINE endorsement has NOT been awarded.

Another example of OBSTRUCTION comes from Burlington County GOP. A member was interested in hearing from Tricia Flanagan, however, the LINE had already been awarded!

The NJ GOP claims they do not get involved, but “Save NJ”, pictured left, describes NJ GOP’s contribution as “influence”, until the Primary is over. This gives the Committees ABSOLUTE SOVEREIGN POWER to MAKE ENDORSEMENTS that decide the establishment LINE-Like a MONARCHY not DEMOCRACY!

Not only does NJ GOP allow counties SOVEREIGNTY, the LINE CANDIDATE receives an IMPLIED ENDORSEMENT from THE PRESIDENT; solely due to the Ballot Layout position. In the Cumberland County announcement above, members were told their endorsement will be “bracketed with President Trump on the Ballot”! THE SAMPLE BALLOT BELOW demonstrates the County Candidate, “Mickey Mouse” as the “Bracketed Candidate” with the POLITICAL LINE & IMPLIED ENDORSEMENT! 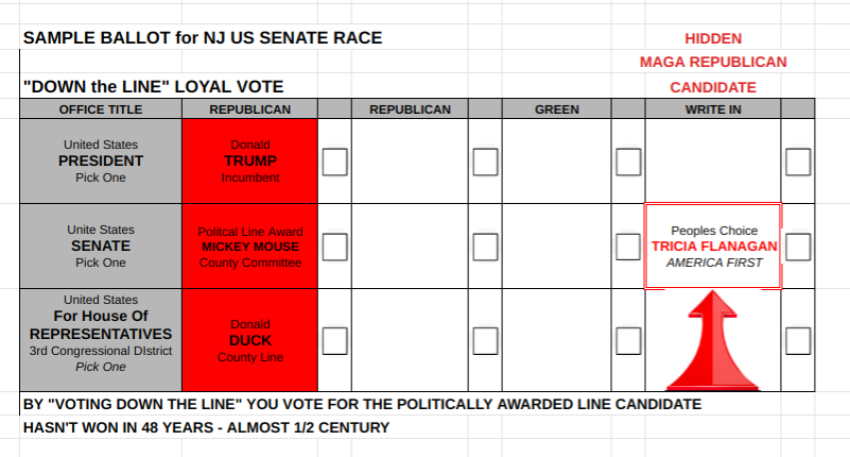 NOTE: THIS IMPLIED ENDORSEMENT FROM PRESIDENT TRUMP is NOT VALID or VETTED! It’s simply the location under Trump’s name

The NJ Republican Party relies on your Party LOYALTY to “Vote Down the Line” for “Mickey”. The GOP depends on voter’s being busily distracted in their daily lives; leaving little time to research elections. Voters are then inundated with flyers of unknown faces & talking points. Lawns are littered with political signs of unknown names, knowing most voters are unfamiliar with the candidates. The Establishment counts on your loyal allegiance to vote “Down the LINE” for “Mickey Mouse” to elect their Candidate.

SIMPLY PUT: A “DOWN THE LINE” VOTE = ANOTHER TERM FOR CORY COOKER

Tricia Flanagan is New Jersey’s UNSUPPORTED candidate who is NOT a RINO, rather the ONLY AMERICA FIRSt MAGA Conservative; she formed NJ’s MAGA Majority in 2018 when she was forced to run as an “Independent” Republican. Once again, due to the lack of Party Support. The LINE was awarded to a RINO. Tricia felt compelled to run because NJ’s Conservative Republican Voice was being stifled by the Party Establishment.  In 2020, Tricia’s VISION is CLEAR;  say no to the LINE (#BuckTheLine), and run as the only true MAGA, People First, America First Republican Candidate.

This April 7th, 2020, a Poll on Twitter, pictured left, shows Flanagan is the PEOPLE’s CHOICE! Flanagan at 56% to Mehta’s 41%. This poll was Tweeted by Rik Mehta’s operative, and quickly removed when the results demonstrated the people’s choice was Flanagan by 14 points.

LIKE TRUMP IN 2016, FLANAGAN is FIGHTING THE ESTABLISHMENT TO MAKE NJ GREAT AGAIN BY PUTTING PEOPLE FIRST!

SHE PROMISES TO FIGHT with PLANS not EMPTY PROMISES for a GOVERNMENT OF , BY AND FOR the PEOPLE!

ESPECIALLY the FREEDOMS bestowed to YOU by our CONSTITUTION and BILL of RIGHTS!

FLANAGAN IS THE FOUNDER OF THE CONSTITUTION CAUCUS

A constitutional lens to re-examine government controls and CHANGE THEM to benefit YOU! NJ has strayed from our Founding Fathers’ vision and principles, and Flanagan’s Constitutional Caucus MAGA MAJORITY Republican Resurgence is a CRUSADE for you and your Constitutional Rights, which are of paramount importance to:

The World is suffering through an epic war of an unknown healthcare enemy; with a media and political environment fanning the fear. Tricia Flanagan is uniquely qualified to handle our new reality. Flanagan has created a proposal to improve your way of life and Healthcare. As a mother of 3, Navy brat & granddaughter to a WWI Veteran, Tricia understands the fears, financial struggle of high premiums, co-pays and deductibles with a reduced quality of care brought on by Obamacare.

Flanagan’s proposal is called the American Healthcare Restoration Act. The proposal RESTORES CHOICE to YOU removing any GOVERNMENT intervention!

The American Healthcare Restoration Act propels NJ in the RIGHT direction. You CHOOSE your doctor; you CHOOSE your plan! During Flanagan’s 25 years of experience, she has gained significant contacts forming a “Team of Excellence” of Physicians, Pharmacists, Pharmaceutical Medical Manufacturers & Healthcare Experts to provide the best quality-of-care for You! All without stopping the advances in innovation. In fact, encouraging NJ to be the go-to state for medical solutions and services!

FLANAGAN’S GOAL IS TO CREATE AN INTERNATIONAL HUB OF BUSINESS & TECHNOLOGY FOR THE U.S. HEADQUARTERED IN NJ DRASTICALLY LOWERING YOUR TAXES

NJ is uniquely positioned to handle domestic and lnternational logistics, to take advantage of the talent groomed by NJ’s prestigious universities and technical schools, to create a booming foreign sales market, to develop manufacturing expansion, leading to more jobs & keeping people in NJ. Resulting in a prosperous State, lower taxes and proudly stamping goods, “MADE IN USA!”

This is what Flanagan likes to refer to as a LIVING ECONOMY rather than a mandated living wage which kills business growth and yields a stagnant paycheck to paycheck life.

DIRTY POLITICS HAS CROSSED THE “LINE”

The Monmouth University Polling Institute has long been considered to be the gold standard for NJ Political polling and recently concluded that “In the race for U.S. Senate, Booker…has a 58% to 33% lead against Hirsh Singh and a similar 55% to 32% lead against Rik Mehta.” Clearly demonstrating the time is ripe to move on to the definitive front-runner of the People of NJ, GOP Candidate Tricia Flanagan, and support her in the 2020 U.S. Senate race if we want to defeat Cory Booker.

Even with the WARNINGS, POLL RESULTS, ARTICLES the GOP COUNTY COMMITTEES are backing Rik Mehta and Hirsh Singh. The reason? UNKNOWN. There are allegations of them being Left-Leaning RINOs who want to maintain the status quo of NJ “Never Trumpers”. There are rumors of buying the “Line”. It seems, Committees prioritize money over MERIT. The Establishment constantly mentions Campaign’s Funds, Money, Money, Money! Why? Are they expecting some? Mehta was allegedly politically appointed to Obama’s FDA and was a former Democrat but calls himself a MAGA conservative, really? Hirsh Singh won some lines presumably because he promised money to some committees that he didn’t have.

Whether true or not, the Social Media mudslinging and politics have gotten out of control-see below. Rik Mehta and his political operatives calling Flanagan supporters xenophobic, racist, bigots and even accused of being a member of the Klan, just for supporting an America First policy position; the NJ GOP & RNC are Silent on the issue!. One of Mehta’s operatives even issued a threat/warning! 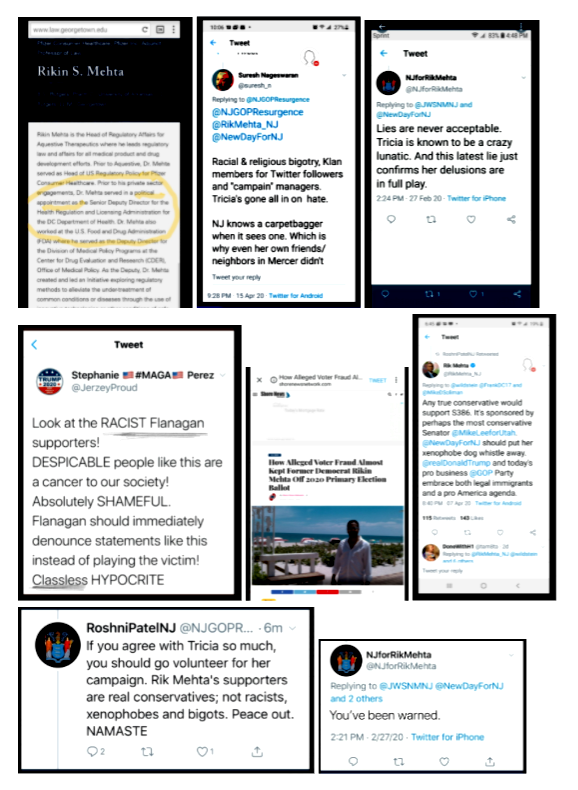 GOOD NEWS IS: If ONLY 10% MORE CONSERVATIVES and REPUBLICANS TURNOUT AND VOTE TOGETHER on July 7th, TRICIA FLANAGAN WILL GO ON TO BEAT CORY BOOKER – SHE’S THE ONLY GOP CANDIDATE WHO CAN!

TURNOUT for NJ Elections are abysmal. Only 3% of Republicans voted in 2019. 5% were Democrat. See official results from NJ Division of Elections above.

IF YOU STAY HOME or VOTE DOWN THE LINE, CORY BOOKER WILL WIN ANOTHER TERM!

#FindFLanagan ON THE BALLOT LAYOUT & VOTE FOR TRICIA FLANAGAN

100 years ago, the Women’s Suffrage movement, fought for the women’s RIGHT TO VOTE; creating the 19th Amendment.

For nearly 50 years, NJ Republicans have been fighting to win a US Senate Election, and LOSING!

2020 creates another historical opportunity for NJ. To end the almost 1/2 century Democrat Stronghold on & to honor the 100th Anniversary of Women’s Suffrage, by electing the first woman to hold a U.S. Senate Seat for NJ; Tricia Flanagan. Let’s GET OUT & VOTE to ensure that the first woman in the US Senate from NJ is a MAGA Conservative Republican who bucked the Line!

On July 7th, FIND FLANAGAN’s AMERICA FIRST, PEOPLE FIRST COLUMN when you VOTE because EVERY VOTE COUNTS! Let’s make a difference and show the Biased Media, Democrats, Establishment Republicans that when Patriots Unite, we WILL make a Change!

When Conservatives and Republican Patriots show up at the polls and elect Tricia Flanagan, “United we Stand” ‘will mean something again in NJ! Vote with 2020 vision and Make NJ Great Again!

Concerned NJ Voter who feels Voters need to be aware of the Political Games being Played by the Republican Establishment. My own Party!