I have been watching Rep Kinzinger for the last couple of years. He is an anomaly – at times arrogant, self absorbed, full of himself.  He is also cocky, handsome and not particularly a respectful person.  It is also my opinion he is disingenuous and will stab anyone in the back that crosses him. He is a social climber and will befriend you if you can help him get what he wants.

He first assumed office on January 3, 2011.  He is 41 yrs old and an Air Force Lieutenant Colonel.  As part of his continued service with the Air National Guard, Kinzinger was deployed to the Mexico-United States border in February 2019 as part of the border security effort.

Below is a Twitter thread that Rep Kinzinger sent on 3/1/2021.  I scrolled through all of his tweets as far back as 2017. I looked at the comments.  Most of the comments are from the left, Trump haters who praise Rep Kinzinger for his attacks on the Republican. 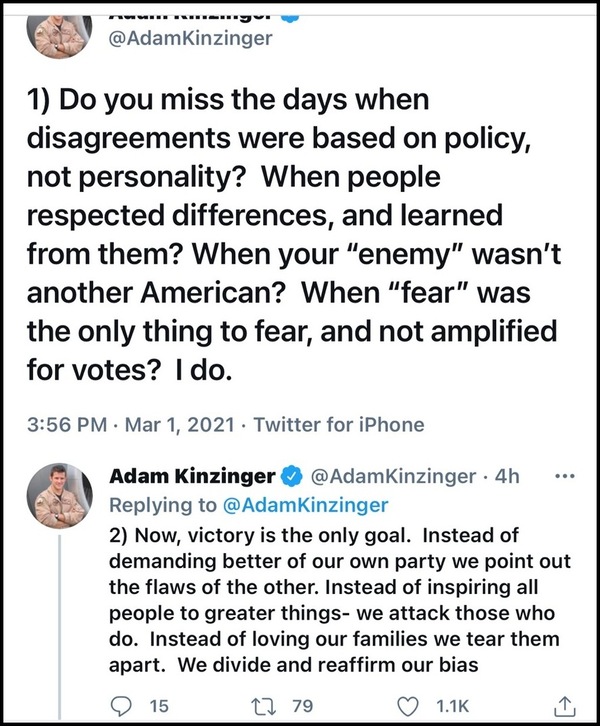 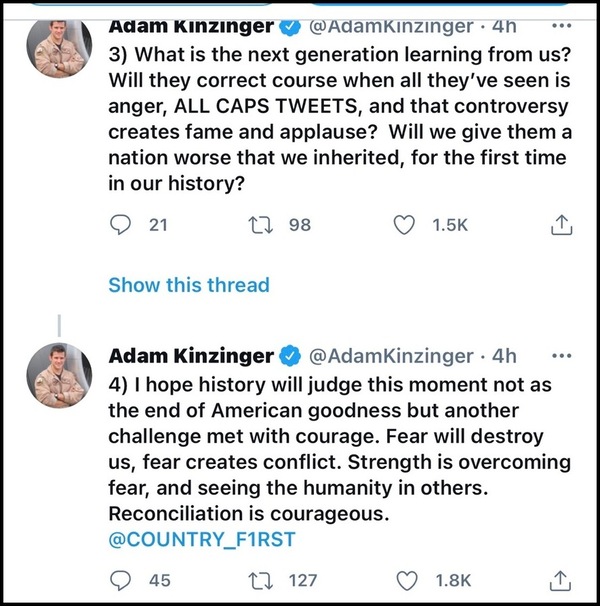 When I read this it is clear Kinzinger is conveying the way he thinks of himself.

“Instead of demanding better of our own party we point out the flaws of the other.”   I only see Kinzinger voting with the democrats.  I see myself attempting to get the GOP to dump this guy.

“Instead of inspiring all people to do greater things – we attack those who do.” He clearly sees himself as doing greater things and feels we are attacking him for the great job he believes he is doing.   He clearly does not see himself as we see him. Seeing Kinzinger giving 67% of his votes to the Democrats inspired me to research this guy and arrive at my own opinion.

He goes on to state, ”Will they correct course when all they’ve seen is anger, ALL CAPS TWEETS, and that controversy creates fame and applause?” This is the most hysterically funny statement I have read in a very long time.  Especially when it comes from a member of the party I once belonged to, from a man who besmirched our ideals in favor of the lefts, from a man who views us as the insignificant little people, a man who is to self absorbed to see that when he insults our President he is also insulting us. This is coming from the man who categorized us on 1/6/2021 as terrorists before any kind of investigation was completed.  This is coming from a man who sits on his throne and does nothing while ANTIFA and BLM continue to loot, destroy and torch private and public property.  This is coming from a man who turns his head the other way while ANTIFA and BLM beat and murder citizens.

He says, “Fear will destroy us, fear creates conflict.  Strength is overcoming fear, and seeing humanity in others.  Reconciliation is courageous”.  Where was your humanity when you were attacking our President and us? I am not afraid.  Are you afraid? I am not a coward?  I speak my mind. Kinzinger I want you to know this.  I was brought up to believe that I should never say anything about anyone that I would not say to their face.  I hope someday to be able to say all of this to your face. It is clear to me you are encouraging us to forgive and forget the Democrats.  You are asking (really it is a demand) us to give up our integrity, beliefs, our character, our religion, our morality and our rights by submitting to socialism and ultimately communism.

I will say this to you only once.  I WILL NEVER BE A FILTHY SOCIALIST OR DIRTY COMMUNIST!

I found two articles about Kinzinger from April, 2019.

One article from Roll Call states “Kinzinger who serves in the Air National Guard, said if the President wanted him for the position of U.S. Secretary of the Air Force, he would consider the role.  Click here to read the RollCall article

Another article from Will.Illinois.edu states:  “In April, 2019 Kinzinger’s name was floated as a possible nominee to become secretary of the Air Force. Kinzinger said he’d consider it, it offered the job. Ultimately, President Trump chose Barbara Barrett, a former diplomat and aerospace research executive.” Click here to read the Will Illinois EDU article

President Trump made a correct decision by rejecting Kinzinger as a candidate for the job. Who does this “little 41 year old snot think he is”? What specifically qualifies him for this position? He was and is a fly boy.  And, now he is an ineffective U.S. House Representative.

First of all I doubt the Senate would have approved Kinzinger, and secondly I can just picture the agitated and angry state of the Air Force Generals being forced to deal with this little snot.  Most importantly, this is about this little man with a big, hurt ego who didn’t get the job.

The fact is Kinzinger was a never Trumper from the get go.  Contrary to what Wikipedia states, “Kinzinger voted in line with the President about 90% of the time and voted against Trump’s first impeachment, but he subsequently became a critic of Trump and made headlines as a rare Republican office holder willing to criticize him.”  This is a blatant lie and his voting record proves it.

Evidently, Don Tracy, who is the Illinois state GOP Chair is perfectly ok with this.  The state GOP website page says,  “Tracy’s top priority has been to unite and grow the Illinois Republican Party by advancing our message of anti-corruption, fiscal sanity, lower taxes, economic growth, and support for law and order.”  If this is really true, I must ask Mr. Tracy this.  Why have you chosen to do nothing about Adam Kinzinger? Is it because, you support only the elite within the Republican Party and choose to disregard the views of those in party that view us as the insignificant little people? 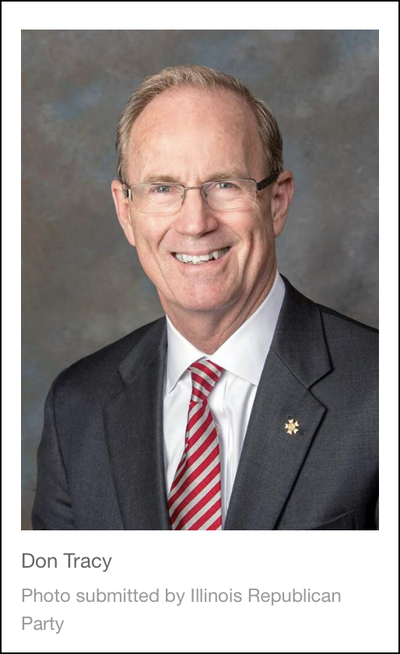 Kinzinger, who has already started a leadership PAC to directly support GOP candidates who have gone up against Trump, is expected to appear at fundraising evens for the super Pac Americans Keeping Country First. Founders of the group, which include Kinzinger advisers, are also launch a sister nonprofit to ‘”build a grass roots army,” according to documents reviewed by The Washington Post.  Unlike traditional PACs, both organizations can accept unlimited donations. Nonprofit groups are not required to disclose the identity of their contributors.” Kinzinger voted to impeach Trump in January and has positioned himself as one of the party’s most outspoken critics of the former president. He unveiled his leadership PAC Country First with a six-minute campaign style video.”  Here is the article if you would like to read it

Of course, the reason Kinzinger is making himself into a media whore is because he is posturing himself to run for the Governor of Illinois.  I find myself asking why anyone would vote for him.  He has proven to all of us that he no respect or concern for the will of the people. His votes have proven time and time again that he votes for anything that will benefit him, not the American people.  He has demonstrated that we are beneath him and feels he isn’t at all accountable to us.

But if this is not enough, his own relatives accuse him of ‘treason’ in a letter blasting him in a second letter for his criticism of Trump. Yes, they sent him a letter before this one.  Eleven family members signed the letter. The Business Insider, February 17, 2021 states, “Relatives of GOP Rep Adam Kinzinger of Illinois sent him a second letter blasting his open criticism of former President Donald Trump, where they suggested that the congressman had committed “treason” as a member of the military and was working with Democratic House Speaker Nancy Pelosi, whom they labeled a “witch/devil.”

How did Rep Kinzinger respond? Wikipedia states, ” Kinzinger said his family members suffer from “brainwashing” from conservative churches that led them astray.”  How pathetic and cheap of him to throw their religion into this.  This one statement speaks volumes to the lack character this man has.

Kinzinger you should also know this – once the bonds of trust are broken, it is very hard, if not impossible to regain trust.

It is refreshing to see two local GOP offices censure Kinzinger.  It is a tragedy for the Republican Party-national and state that they stay silent.  As long as they stay silent, they will receive no donations from me. Period. I will donate directly to the campaign accounts of candidates I support.  I recognize the balance of power is important.  Evidently, Kinzinger doesn’t understand this because he has contributed nothing toward the balance of power.  I will vote for a Democrat before I will vote for this man.  Let’s pray that state and national GOP recognize the need to find a suitable candidate to primary him.  If not, I would vote for the democrat just to get him out of office.  It certainly will have no bearing on the balance of power.

Here are his top 20 donors from 2020.   But what you will see here should remove any doubts you may have that Adam Kinszinger is a full fledge Democrat.  If contributions to him from Bill and Melinda Gates don’t convince you, then nothing will.  The people, organizations and companies on this list are not worthy of my  business or my support: 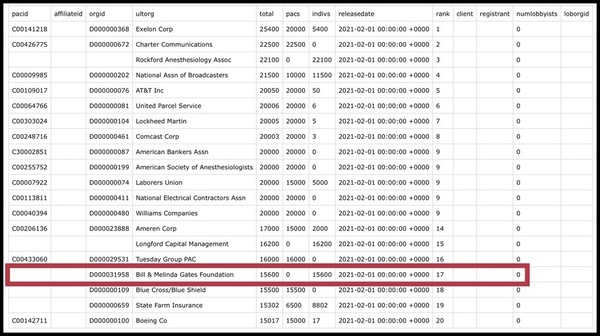 Here is what I am doing.

1. I will make no donations to the Republican Party directly or indirectly.

2. I will donate to the campaign accounts

You can follow me on Gab, Parler and Telegram @TheSheilaG2020.  You can email me at [email protected]