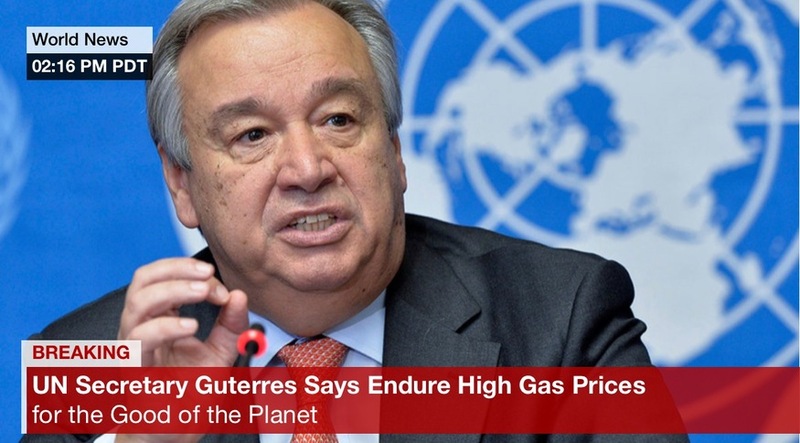 UN Secretary-General Antonio Guterres said via a tweet, “The pain of soaring gas prices must be endured because any wider embrace of fossil fuels as an alternative is “madness” and threatens global climate targets”.

Spoken like a true socialist which he is. I call bullshit on his statement. I would go so far as to call him a liar.

António Manuel de Oliveira Guterres since 2017 has served as secretary-general of the United Nations. He is a member of the Portuguese Socialist Party, Guterres served as prime minister of Portugal from 1995 to 2002.

Guterres served as secretary-general of the Socialist Party from 1992 to 2002. He was elected prime minister in 1995 and resigned in 2002 after his party was defeated in the 2001 Portuguese local elections. After six years of governing without an absolute majority and with a poor economy, the Socialist Party did worse than expected because of losses in Lisbon and Porto, where polls indicated they had a solid lead. Eduardo Ferro Rodrigues assumed the Socialist Party leadership, but the general election was lost to the Social Democratic Party, led by José Manuel Barroso. Despite this defeat, polling of the Portuguese public in both 2012 and 2014 ranked Guterres the best prime minister of the previous 30 years.

He served as president of the Socialist International from 1999 to 2005 and was the United Nations High Commissioner for Refugees from 2005 to 2015. Guterres was elected secretary-general in October 2016, succeeding Ban Ki-moon at the beginning of the following year and becoming the first European to hold this office since Kurt Waldheim in 1981.

Gutteres on a personal level may be a very nice man. However, his ideology and his belief system are quite frankly, stupid.

Zero thought was put into his statement above. Why do I call it bullshit? Guterres did not give any thought to electrical grid systems, emergencies, traffic jams, manufacturing, access to minerals, etc.

America cannot possibly be the only country with an old fragile electrical grid system that cannot sustain a country built upon electrical energy only. Yes, I know Guterres will say that we have wind and solar power. That is another problem that will contribute to America’s grid system- both produce electricity. What about the turbines that kill thousands of birds a year? How will the turbines be disposed of? Your poster child for wind power is the state of California which leaves them laying in the turbine fields creating a 3rd world shithole sight to behold with one’s eyes. How will you dispose of old and non-functioning solar panels? Do the same as California and Nevada and leave them laying on the fields, again creating a 3rd world shithole sight? How will you dispose of dead batteries? You can’t put them in landfills or bury them. Perhaps Mr. Gutteres would like us to ship them to his residence and he can stack them to form a protective fence.

What happens to coastal cities that are evacuating for hurricanes, flooding, and monster storms when the highways are at a standstill and Florida has a hurricane coming toward Miami. The Governor orders an evacuation. All cars head north. They all need to be charged in Jacksonville. How does that work? Has anyone thought about this? If all cars were electric and were caught up in a three-hour traffic jam with dead batteries, then what? Not to mention that there is virtually no heating or air conditioning in an electric vehicle because of high battery consumption. What happens when there is not enough electric buses to evacuate all of the citizens before the storm hits?

If you get stuck on the road all night, no battery, no heating, no windshield wipers, no radio, no GPS (all of these drains the batteries), all you can do is try calling 911 to take women and children to safety. But they cannot come to help you because all roads are blocked. Gutteres will probably require all police cars will be electric also. Until the batteries are charged no one is moving anywhere!

How do you charge the thousands of cars in a traffic jam? Same problem during summer vacation departures resulting in miles of traffic jams. There would be virtually no air conditioning in an electric vehicle. It would drain the batteries quickly. Colorado and Utah could have the same problem with ski traffic during the winter months. In this case, running the heaters will drain the batteries as well. Where is this electricity going to come from? Today’s grid barely handles today’s users’ needs. Can’t use nuclear, natural gas is quickly running out. Oil fired is out of the question, then where?

Oh, wait. What Gutteres didn’t say is that we won’t own cars and we won’t own anything in the very near future. We won’t be living in rural areas either. Rural areas will be classified as protected land. Everyone will be ushered into urban cities living in apartments provided by the globalists behind the great reset provided of course you aren’t six feet under from the depopulation event. You will be using public transportation and walking or riding a bicycle as your primary mode of transportation.

Fossil fuels are a dead end — for our planet, for humanity and for economies.

A prompt, well-managed transition to renewables is the only pathway to energy security, universal access & the green jobs our world needs.

Our continued reliance on fossil fuels puts the global economy and energy security at the mercy of geopolitical shocks and crises.

We need to fix the broken global energy mix.

However, Gutteres artfully left the following information out as well:

1. Oil and natural gas provide 84% of all of the world’s energy. This is down two percentage points from 20 years ago.
2. Oil still powers 97% of all global transportation.
3. We are not transitioning away from fossil fuels. Two decades and $5,000,000,000,000 of governments investing in green energy and the needle has barely moved.
4. To get the same energy from wind and solar that we get from fossil fuels will require a massive increase in mining by more than one thousand percent.
5. The cost of 50 raw materials needed to make solar panels and batteries represent 50 to 70% of the cost of manufacturing these two items.
6. Wind and solar only account for a few percentage points of the global energy supply.
7. China is our single largest source of critical energy materials.
8. The U.S. is dependent 100% upon imports for 17 critical minerals.
Do we want to make ourselves dependent upon China? We have seen how well it has worked for Europe to make itself dependent upon Russia for 40% of its natural gas.
9. We have all of the minerals we need here in North America. However, we can’t get them out of the ground because mining in North America has fierce environmental opposition. Ironic isn’t it – the same people and the green-leaning politicians and environmentalists who want electric cars and batteries are the same people who shut down mining. Keep in mind it was Biden that shut down the proposed nickel mining in Northern Minnesota.

If you believe Putin is a white hat in the war on Ukraine you may want to rethink your position. Why? Let me tell you what they all have in common. The US, Canada, France, United Kingdom, Germany, WHO, the UN, Nato, the European Union leaders, the leaders of the EU nation-states, Zelinsky, and Putin are all members of the World Economic Forum. The World Economic Forum (WEF) is run by Nazi Klaus Schwab and Nazi George Soros. For the many who state these men are Jews, please know I don’t’ care if they are or are not Jews. Being a Jew is only one facet of who they are. And, if they are it is something beyond their ability and mankind to change. Nazism is a belief system that one adopts and they are Nazis who want to control the world. They want to succeed where Hitler did not. Collectively, these people do not value human life. They view humans as expendable.

The United Nations is simply the mouthpiece of Schwab and company. Believe nothing they say. None can be trusted.

You can email me at [email protected]