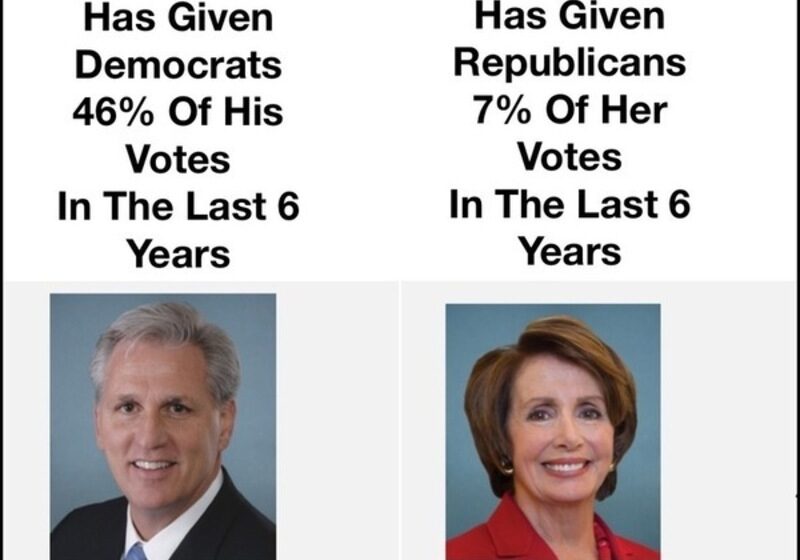 I find it incredible that we have 198 conservative House Representatives who believe giving 46% of your votes to the liberals is effective leadership.

For the last six years, using McCarthy’s top 50 votes clearly and undisputedly shows him giving the left of 46% of his votes.

This alone – all by itself, should eliminate him from consideration. This earned him a Grade F from the Liberty Score computed by Conservative Review.

How effective was he in convincing Pelosi to support conservative legislation?

Using the same data source for the same period and the same computation of votes for Pelosi, reveals she gave conservatives 7% of her votes over the last six years.

That’s right. In return we received 7% of her votes.

Let me say this one more time;

McCarthy gave 46% of his votes to the liberal agenda.

Pelosi gave 7% of her votes to the conservative agenda.

In my view, this is not only ineffective leadership, it is pathetic leadership. It falls between low and no leadership.

The only true measure of any member of Congress is how they cast their votes once they take the seat. This is “THE ONLY MEASUREMENT” of performance that separates political rhetoric (words) from action (votes). When words and actions are incongruent it is the first meaningful indicator of deception. McCarthy’s words are and actions are well past the mark of  incongruent.

2. He back stabbed President Trump a number of times. I don’t know why Trump stands by this deceiver.

3. He railed on about the funding bill passing the Senate. Why didn’t he use his authority and leadership to set a plan with our conservative Senate Leader to derail it?

There is much, much more and it doesn’t matter. His votes are in black and white and that is what matters.  I defy anyone to tell me how giving 46% of his votes to our enemy contributes to the balance of power. It doesn’t. He has deceived us for long enough.

As far as what the left has to say about this, I could care less. I no longer listen to what they have to say. I look at the facts.

Listen to the statements our conservative Congress is making about Rep Elect George Santos. They are shredding him for lying about his experience. This is laughable when the people who are shredding him represent 30 percent of our conservative house members – approximately 60 out of 218 members, that have voting grades of D or F. The D and F’s are failures. It is ok for them to stand up everyday and lie to us but it’s not ok for anyone else to lie. That is a prime example of incongruent behavior!

I don’t care what Santos did. I want a representative that will vote for the conservative agenda. If he doesn’t do that, then it’s up to the people who elected him to take him out. It is not the responsibility of the liars who are in office.