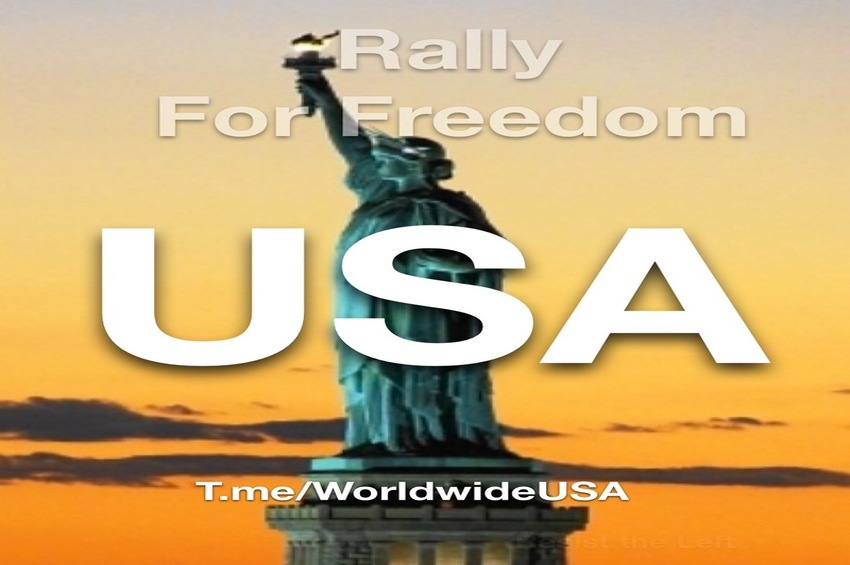 A note from the Editor:  This is the brief story of how an American citizen, Gina, living in the UK, and a German citizen, Harry, living in the Germany, came together to form Worldwide USA and brought America into the fold with “Official Voice” (Formerly, World Wide Demonstration) who organizes and unites citizens of countries around the world to stand together. I find it incredibly inspiring and interesting. I hope you do too.

So, where shall I begin? Was it during our first lockdown in the UK, when good and decent law-abiding citizens were told not to leave their homes, and Antifa, along with BLM, decided to vandalize London, tear down statues and attack innocent victims? Was it when I saw a picture in the news of a dead bat floating in a bowl of soup or the doctor who had been censored for posting a video warning to others about the dangers of mRNA vaccines or the boatloads of migrants who were being imported into England and put up in lofty hotel accommodations that were vacant because the rest of us were “staying home to save lives”?

What is it that made me flip my lid? Perhaps it was seeing St. Patrick’s Cathedral in NYC get graffitied, and the city that I hold in my heart get destroyed. Whatever it was, it’s been building up. Before even all of this, the country that I love was being chipped away, bit by bit, with ideologies and a victims culture that no one could seem to battle against if they couldn’t recognize it for what it was…good old fashioned Marxism.

I’m an American who happens to live in England. I respect the people, their values, history, and tradition. I’m also a big fan of Winston Churchill and went out on a protest two summers ago with veterans to protect his statue. Some of them shamed the police for kneeling to BLM and not performing their duties. I went on more anti-lockdown protests, and people were beaten by both BLM and the police. Winter came around again, and so did the government restrictions. Christmas was canceled.

I was searching for anything to happen that would make a difference or change things, and it wasn’t until February where I found a strange invitation to Telegram and join in on a freedom protest. It happened in March and was the most massive gathering of people I’ve ever witnessed in my life. Young people, old people, people with their kids, hippies, people who are not hippies (like me), all different colors, creeds, you name it, they were there flooding the streets. The Telegram group was initially called World Wide Demonstration and was quickly renamed Official Voice, and I’ve been with them since.

Through this, I met Harry. He had a channel called “Share Facts” that organized all protest groups according to country across the globe. What was missing? The USA.

I asked him why and although he didn’t know, he had the skills to build it. We reached out to World Wide Demonstrations to support our idea, and they didn’t answer. After numerous attempts, we built it independently. We also reached out with US groups registered with them, and they called us “imposters” they told us to hand it over because we weren’t “official”. After establishing 50 state groups within a few months, I sent Sunny (a German girl who makes flyers with her sister and their Turkish boyfriend) a request for WWD registration of 18 US rallies. No response. So we continued to run independently. Then came Carolina Rodriguez Galvan, aka “Carolina Bonita”, our most trusted admin. She brought in America’s Frontline Doctors, and they quickly disappeared because, according to her, someone had a pornographer boyfriend. She said she had a legal team, a security team a media team, and nothing came to fruition except for absolute chaos. She broke up our groups and lured admins with empty promises and an absurd idea that they could profit from merchandising together.

Harry and I were attacked by Joe Olson, who accused us of being affiliated with Antifa, the Children’s Health Defence, who published an article stating that we were inciting violence, and all sorts of so-called “patriotic freedom fighters” throwing ridiculous terms around like “agent provocateurs”. Does anyone even know what that means in this day and age? It sounds like something a seven-year old would pretend to be while writing spy messages with invisible ink.

Harry is German, and no, he is not “controlled opposition”, he’s a grown man who understands history and what lead up to the war in his country.

Despite all the negativity, we have also been blessed with terrific state leaders who plan rallies, connect citizens and motivate their members to stand up for themselves. The leaders are from places like Oregon, South Carolina, Tennessee, Kentucky, Louisiana, Nevada, Nebraska, Alaska, Idaho, Michigan, New York, New Jersey, Connecticut, and Montana, just to name a few. If I could fly around to each of these states just to hug those guys and say “Thank you” in person, I would.

Hopefully, it’s not too late for America. Sometimes I wonder if the masses have just grown fat, happy, ignorant, and anesthetized by popular culture. As long as they have Walmart, Netflix, and Amazon Prime, it seems for them, the world is fine. Did we not grow up in the same America together? The country has declined so drastically, it’s almost unrecognizable now. Remember comedy? What happened to it? Where have all the beautiful women gone and those brave and rugged men who would come to their rescue in the nick of time? What happened to our work ethic, ambition, and achievement based on merit? Why is it now all of society’s problems if someone cannot determine their own gender? Sadly, the list goes on and on.

It’s not only covid madness that inspired us to create WorldwideUSA; it’s the web of problems everyone is facing with a plandemic that seems to be the hub.

We did not do this for our benefit, and there is nothing personal to be gained. We do not have political affiliations; we do not collect email addresses or personal information from our members or admins. There is no money being collected or exchanged. The only intention behind WorldwideUSA is to allow American citizens to quickly find the state in which they live, connect with other patriots on a local level, rise together and reclaim their freedom from the powers that be. Unfortunately, some state groups have had to be rebuilt, but that’s alright. The only way to move is forward.

Here are the links to WorldwideUSA. Dates are coming very soon for the future. Please find your state and join. America needs you.

American citizens are standing up to reclaim their freedom and support our brothers and sisters around the world.