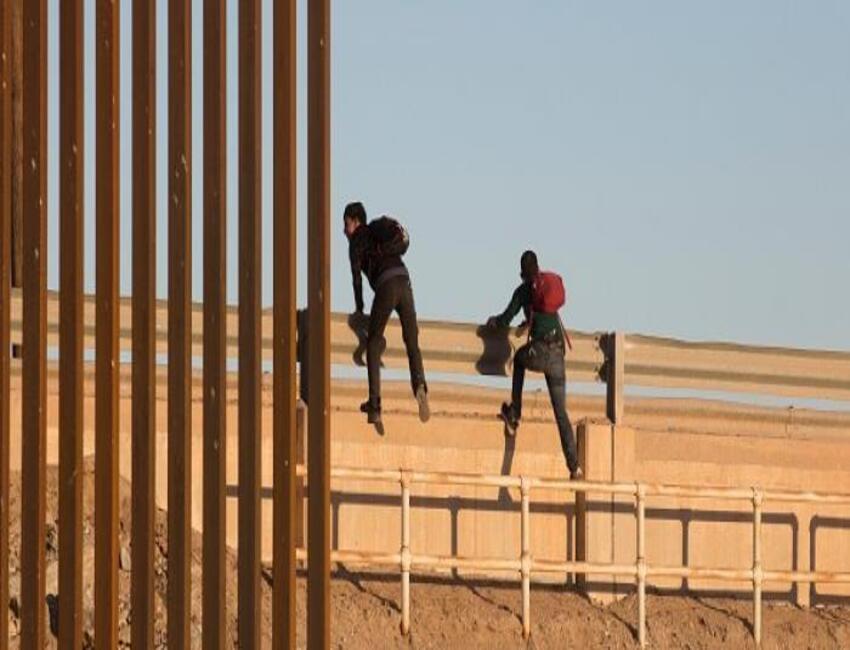 Migrants from Central America make a run for it after crossing into the United States near Yuma, Arizona. (Photo by Andrew Lichtenstein/Corbis via Getty Images)

Since February, which was President Joe Biden’s first full month in office, 23 aliens who had previously been convicted of homicide in the United States were charged in Arizona with illegally reentering this country.

We know this because the office of the U.S. attorney for Arizona regularly publishes these numbers. It puts out a monthly report on “immigration and border crimes” in its district, which encompasses all of Arizona.

In February alone, for example, the office reported that 190 foreign nationals in Arizona had been charged with “illegal reentry” to this country. Among these, 151 had already been convicted of a non-immigration crime in the United States. These included 44 aliens who had what the U.S. attorney’s office described as “violent crime convictions.” Two of these had already been convicted of “homicide” in the United States.

But that did not stop these two from allegedly returning illegally to this country after they had been deported.

The return to the United States of deported aliens who had previously been convicted of homicide did not stop with the two charged in Arizona in February with illegal reentry.

That brought the total (since February) to 23.

In October, fortunately, the office of the U.S. attorney did not charge anyone who had previously been convicted of homicide with illegal reentry to the United States.

But the data published by the Arizona U.S. attorney over the last nine months makes an obvious point: America has created a revolving door. A foreign national can come here, kill someone, be arrested, convicted and put in prison, then be released and deported.

Then they can reenter the country illegally.

In recent days, much of the nation and the media have been fixated on a homicide case being tried in Wisconsin. But how much attention was ever focused on the 23 homicides carried out in this country by the foreign nationals who, after their convictions, imprisonments and deportations, had allegedly returned illegally to Arizona?

Homeland Security Secretary Alejandro Mayorkas runs the federal agency that is responsible for securing our borders and enforcing the immigration laws. This week, he testified in the Senate Judiciary Committee.

What was he concerned about?

The first section of the written testimony he submitted to the committee was headlined “Terrorism.” This is a threat, he told the committee, that has “evolved.”

“In the years immediately following 9/11, the primary threat evolved from foreign terrorists to homegrown violent extremists (HVEs) — the individuals in America who are radicalized by a foreign terrorist organization’s ideology,” he said. “The threat has evolved further and now includes domestic violent extremists (DVEs) — U.S.-based lone actors and small groups who seek to further political or social goals wholly or in part through unlawful acts of force or violence, without direction or inspiration from a foreign terrorist group or foreign power. These actors are motivated by various factors, including biases against minorities, perceived government overreach, conspiracy theories promoting violence, and false narratives often spread online.

“Today,” Mayorkas continued, “U.S. based lone actors and small groups who are inspired by a broad range of ideologies, including HVEs and DVEs, pose the most significant and persistent threat to the homeland.”

The government official responsible for securing our border, in other words, sees the “most significant and persistent threat” to our country coming from other Americans. He does not see it coming from foreign nationals who were convicted of homicide in the United States, deported and then illegally reentered the country.

To deliberately harm someone’s property or person is an evil act for which the perpetrator must be held legally accountable. An American citizen who does so as a political protest should face the legal consequences just as surely as an alien who does so for other reasons.

Will Mayorkas stop foreign nationals who have already been convicted of homicide in this country from illegally crossing our border?

Neither he, nor any future Homeland Security secretary, can ever hope to do so if there is no physical barrier at our border and people can continue to cross illegally without ever being screened by Customs and Border Protection.

(Terence P. Jeffrey is the editor-in-chief of CNSNews.com.)